Electric blue and a Scottish VS

Despite a 'showers' forecast Adam, John and I went to Craig Stirling. It is up to 30 m high and the venue of the Aberdeen Deep Water Soloing festival. Take a parachute and a dry suit. 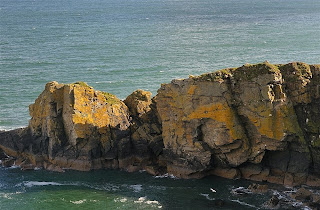 John was happy to belay me on Electric blue E1 5a** on the left hand side of the West buttress (the buttress on the right). Here is a short video...

It started on barnacles and wet rock, definately a turn off for me... 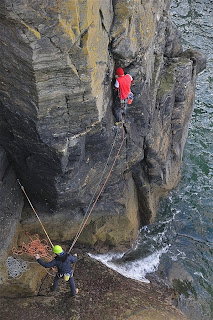 ... but the rock was dry higher up with some great climbing and sufficient protection. The finish was steep... 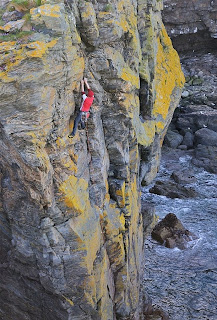 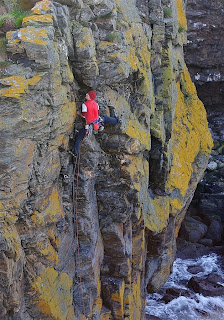 ... before topping out. Btw. Adam took the photos. John was the first to second and raced up itbeing in top form at the moment. 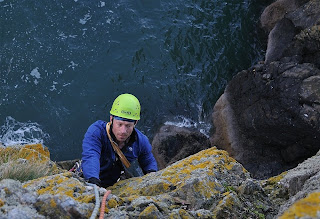 But Adam won the price of the evening for, to my knowledge, his first clean ascent of an E1. Brilliant effort! After that John fancied a no star VS that makes even distinguished veterans of the art shudder. It all starts with an innocent corner up to a ledge... 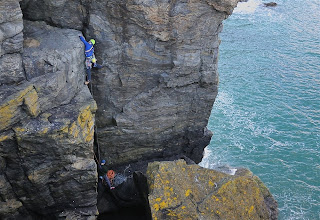 ... but then there is a leaning crack requiring an awkard mantleshelf at the top onto a ledge with no space above due to the leaning wall above. Invariably even stylish performers end up in a 'Venus of Urbino' position (the wrong way round though). Compare http://en.wikipedia.org/wiki/Venus_of_Urbino with John. I did the same whereas Adam had a power grunt, a rest and then attacked it frontally. 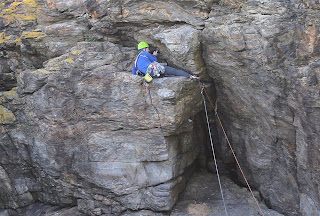 After that a crumbly top out to give it a good Scottish VS. 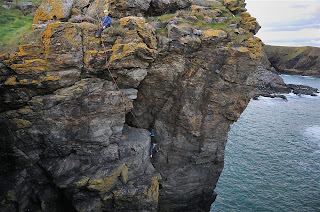 This little cutie is definately recommended as a first VS lead!
HW
Posted by Ryan & Henning at 14:49 No comments:

Solace at the Luath stones

After several phonecalls there was still no outdoors climbing partner and at the pass of Ballater the hoped for climbing partners were not there. So I went to the Luath stones for solace and did a few of the easier problems shown in the wee clip below.

Ryan and I had a wee training session at Clashrodney to screw my leading head back on. We did Birthday treat E1 5a, Capitol wall VS 4b, Gorgon VS 5a and Chester VS 4c.

Above is a video of Birthday treat just before the midway ledge and below one of the starting moves on Gorgon. Both climbs are classics of the crag.

Declan Lunny is a friend who used to work in Dundee but who moved to Singapore a couple of years back. We had some good mountaineering sessions together before his move (buy him a Guiness and you might be lucky to hear them) and every year we meet up to add a walk. On Saturday Ana and I picked up Declan but also Celine, another friend of ours, and we drove to Glen Clova. We walked up Jock's road... 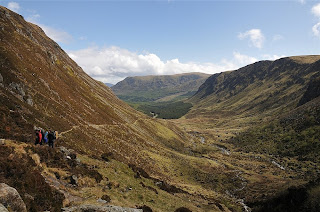 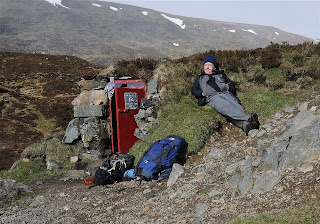 We left some gear and did four Munros, first Tom Buidhe and Tolmont (Declan shown at the summit of the latter)... 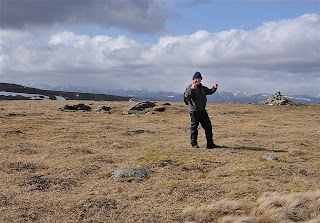 ... follwed by Cairn Bannoch and Broad Cairn. Still snow left in the high Cairngorms and happy bunnies on the plateau (spot the bunny on the picture below). A 330 ml Glenmorangie oxygen bottle helped us to cope with the effects of altitude. 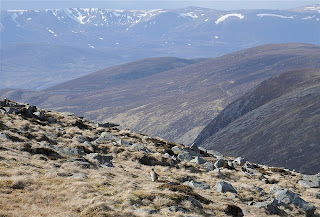 We returned to the shelter which we had renamed 'the old chateau' and had a three course dinner. It consisted of Spanish lomo as a starter, pasta with aubergine pesto as a main course and caramel cookies as a desert. This was complemented with a good selection of beers, French wine and the remaining oxygen. Prof. Lunny then gave an account of his harrowing experiences in the most hostile places on Earth. The ladies nearly fainted when hearing of the various acts of gallantry on steep North faces or on the oceans of this planet. 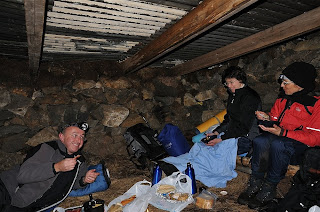 BBC Scotland had heard of the presence of the distinguished Prof. and conducted an inverview in the morning:

We then parted with the bonny place and walked down Jock's road. 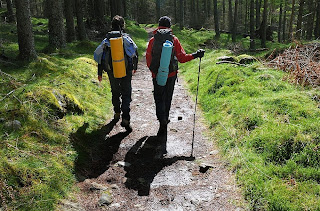 With three days off work and the weather forecasters giving a poor outlook for the West coast, it looked best to stay local and explore the crags on the coast that take time to find, time we never really get in an evening. Paul, Chris, Matt and myself headed north to Meackie point. A steep compact Granite crag with nothing below HVS this is well worth a visit. 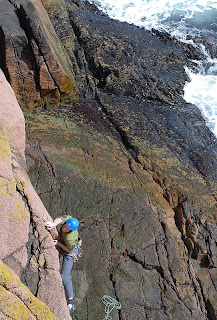 Paul and Chris started on the classic Killing moon, E1 5b***. Whilst i took Matt up an equally good HVS called Flurry. Well worth the 3 stars it receives. Having not climbed for a couple of months Matt had a tough time on this steep line, thought I'm sure he gave it his best. Paul then jumped on the un-starred Water margin E1 5a, taking the corner/groove direct making it 5b, and stating it was tough and deserved stars.

There's a sea level traverse of the wall described in the guide book as 'a fine excursion'. Being only a Severe with a couple of stars I thought this would bee a good one for Matt to second. I had trouble finding the start proper so started it on an over hanging wall, harder than Severe i was sure I'd gone wrong somewhere. Easy traversing fallowed on slabby ground with jugs and good gear. Matt wasn't too keen on the direct line I'd taken (and the possibility of getting wet!) so backed off and called it a day. Paul was up for it, i needed to get my gear back anyway! 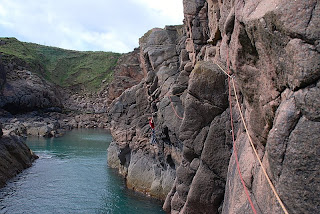 This is Paul starting the traverse, which is slightly overhanging and tricky. We both agreed it was about HVS 4c. 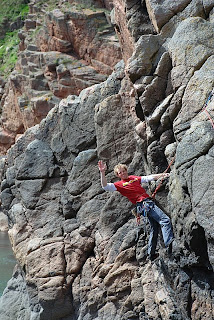 good fun was to be had. 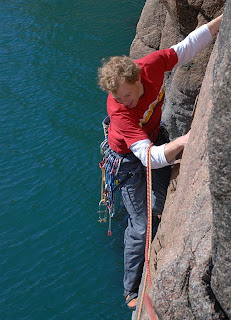 this one shows Paul on the tricky 'crux' of the proper route. 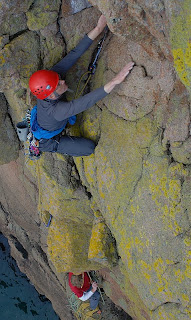 Chris hadn't led yet and had his eye on toe cap, VS 4b*. After abbing in I set up the rope to get some shots of Chris dispatching another VS. The photo above shows him climbing the tricky hanging groove. 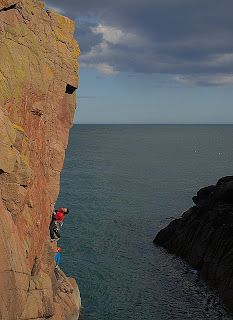 Sole fusion, E1 5b**, is the only E1 here and the i didn't fancy the E2 as it looks bold as brass! Not really my cup of tea at the moment. This one proved tricky to start. Once on it though (after much swearing and shouting), steep climbing with good gear led me to a flake crack on an exposed position.

Chris being about 10 stone lighter than me seconded this without even breaking a sweat! 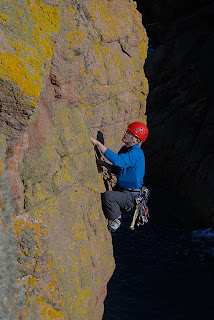 We called it day after this as the threat of more showers loomed. With the moisture in the air a rainbow formed near Boddam light house and gave me the opportunity to capture a bonny photo.

Sunday started clear and dry so after a short phone call with Chris we decided that Hunly's cave would be a good choice for the day. I'd been told a couple of horror stories from local climbers about a route here called Pete's wall and thus was keen to go have a look and see what all the fuss was about.
This is a steep schist crag with big roofs and routes across the board crossing improbable ground. Chris started on cave route, HS 4b***. He led it all in one pitch with good rope work to reduce drag this is a fine pitch up a corner and out under a roof to the chimney crack and thus the top is gained. 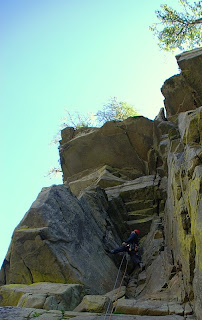 Chris led this in fine style, though I'm sure he'd easily fit in to the crack at the top and body jam up! 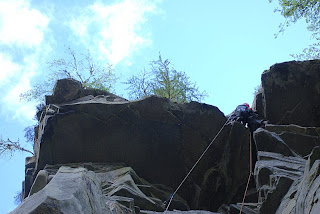 Next up was the classic of the crag, Double overhang HVS 5b***. A steep wide chimney blocked by two roofs provides exiting and tricky climbing that sometimes resembles karma sudra and yoga mixed. On good gear the roofs are cleared in the least elegant way.
After a short lunch break I was keen to give Pete's wall a go. Getting ready below it i was nervous, two good climbers from Aberdeen had already failed on this one recently. The climbing started off ok, not too hard. A couple of moves and I was under the roof, the so called crux, getting the gear well placed, I shook out and tried the long move. It didn't go at first. Along way up for a shortie. Putting my feet higher I made the long reach up to the hold and rocked over, placed a couple of good cams had a wee shake out and moved right on good but flat holds, getting pumped with every move. Then the rain started. I was near the top, pumped stupid and struggling to hold on with the rock now getting damp. I somehow managed to get back to the cams and had a rest as the rain poured, I lowered off, stripping all the gear, disappointed at being so close. 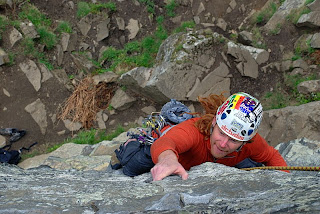 It took a short while for the crag to dry after the rain stopped. We waited, I was confident now I could bag this and was reluctant to leave with my tail between my legs. This time the climbing was fluid, no nervousness. I reached the cams and my high point in no time, moved up and back down, now getting pumped. I made a good nut placement under the final wall, giving me confidence to push on to the top with some yelping and shouting on the way! 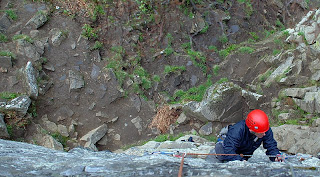 This shot shows Chris on the 'good' rest above the roof. 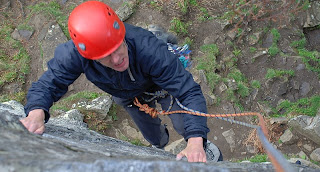 And this one is Chris on the final wall, gritting his teeth, working thought the pump.