Too fast too furious

Not really cold enough for winter climbing? Not much time? Need to get strong? Need to be precise with ice axes and crampons? For those living not too far away Newtyle quarry is a good option. So Robbie and I went last Saturday again for working 'fast and furious', a route by Scott Muir graded D10, which is the drytooling equivalent of the mixed M10 grade. We managed both to clip the first 5 bolts before giving up pumped. The other team in the cave were Andy Inglis and James Higgins who had bagged several grade VIIs and VIIIs last winter season and who both managed to redpoint fast and furious last season. Here is James belayed by Andy on the 'too fast too furious' (D11+) extension after jugging up to the roof. 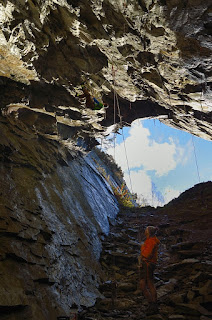 Also Andy attempted 'too fast too furious' and I made a wee video of his impressive attempt in order to get more footage for a video on conditioning for Scottish winter climbing. The video is here...
Too fast too furious from Henning Wackerhage on Vimeo.
HW
Posted by Ryan & Henning at 13:40 2 comments:

The long way over the Minigaig

As a teenager I spent much time with Supertramps 'Breakfast in America' which was the only tape I had at the time. Whilst listening to 'take the long way home' and all the other songs I planned a cycle tour through Sweden and Norway. The tour happened only many years later but the longing for long ways stayed with me until today. So when I came across the Minigaig walk in Cameron McNeish's 'Scotlands 100 best walks' I knew I had to do this. The opportunity came last weekend. Declan and Ana were up for it and so we met in Blair Atholl as we wanted to walk from Blair Atholl in the South to Kingussie in the North, a distance of 45 km or 30 miles over the Minigaig which is a mountain pass. It used to be the equivalent of the A9, an old trade route that connected the two settlements since the 16th century.

We met in the Bothy Bar of the Atholl Arms Hotel on Friday night for good food and a pint. We then walked out into the cold night past the whim plantation to reach via snowy landrover tracks the Allt Scheicheachan bothy. Here it is in the morning... 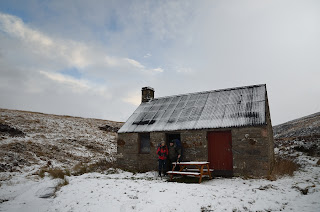 ... and here it is when Ana and I arrived. Dec had gone ahead and lita candle in the window. We had it to ourselves. It was a frosty night. 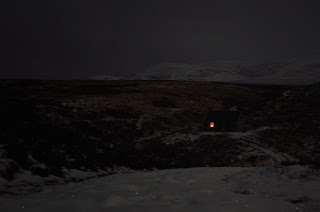 We then walked a boggy path to reach the landrover track of Glen Buar at Bruar Lodge. A few holes with blue skies opened up from time to time. 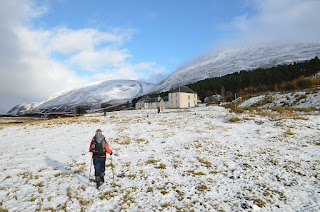 Several herds of red deer were on the western and eastern flanks of the glen. 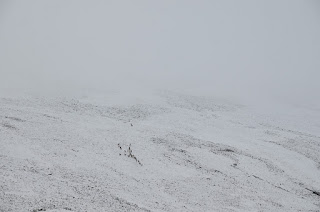 At the cul de sac of the glen I went ahead to prepare coffee and soup for Ana and Dec before ascending the   Minigaig plateau. Here we ascend from the glen. The path is marked by irregular cairns but at one stage the normal path was hidden by snow and so we just followed deer footprints near a stream that would meet the regular path according to the map. We were in the clag but the sun was at times nearly breaking through turning everything into an white-orange glow. Here are Ana and Dec in the distance close to the Minigaig which is the highest point of the pass at the northern end of the high plateau. 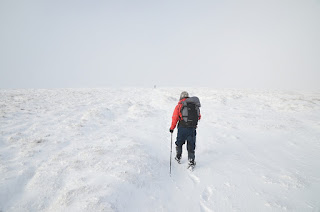 And here are Ana and I near the highest point of the Minigaig for the official Minigaig photo. 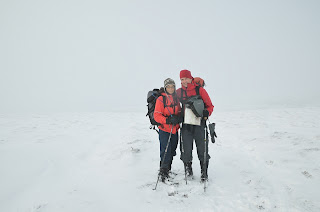 On the descent the clouds left us and we saw the hills of the Monadliath, of Glen Tromrie and Glen Feshie. Here is Declan putting the first foosteps into the fresh snow... 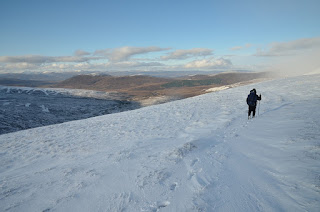 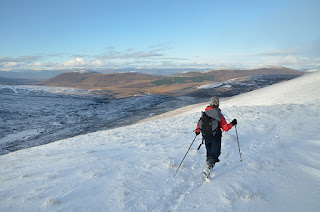 At the bottom several miles of boggy ground are the link to Glen Tromrie where we pitched 'camp orange'. 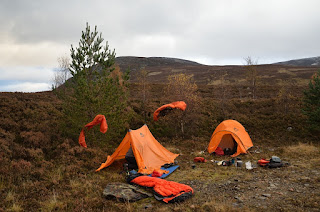 Glen Tromrie comprises tarmac and landrover tracks and it is a long plod to reach the road to Kingussie. 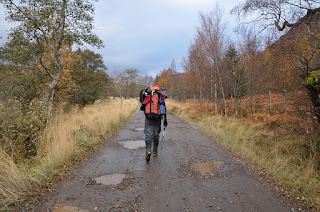 Here is Dec and the sign that shows the other way. 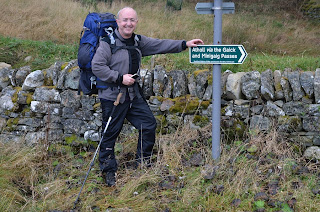 Two miles of road to reach Ruthven barracks where the grey skies opened up. 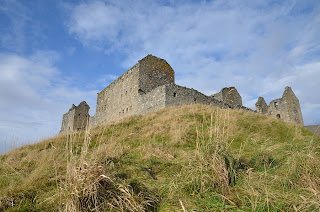 Here another view with a snowy hill and Kingussie in the distance. 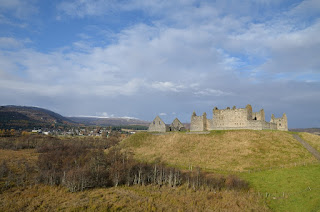 We took the train to Pitlochry and taxi back to Blair Atholl for meal number 2 in the bothy bar.

A great trip well worth doing. For planning, ensure to go with the wind if its Southerly or Northerly. For our weekend a Southerly was forecast and pushed us all the way. Also go lightweight as the felt weight increases over the miles. You don't need to carry water as there are streams nearly all the way. Good places to stay are the Allt Scheicheachan bothy but it can be busy in summer. So only use it alone or with a small group. In summer camping on the Minigaig plateau should be great. In Glen Tromrie the camping is not that great and it did not help that the drunken retard of the glen felt that he had to stop daddy's landrover in front of the tents at 3 am, put his super deer lights on and honk his horn for a while. I think I saw him the next day with daddy in the big rover. He now looked like a retard with a hangover...
HW
Posted by Ryan & Henning at 14:23 3 comments: