Due to weekend commitments, poor weather and many other excuses I only got one multi-pitch route done this year which was Inbred right at the beginning. A good forecast for the 12/13th of September gave hope for the Cuillin ridge but then the forecast changed for Skye but was good for the Ben. Minus One Direct E1 5b**** was what Robbie and I independently came up with and so on Saturday at 6.30 am sharp we walked in from the North Face car park. 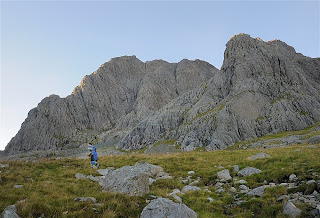 The route consists of 10 pitches and here Robbie is starting the climb proper with a 4b pitch. 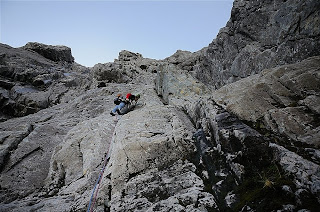 Two other teams were behind us. A couple from Edinburgh (you fancy a wee climb darling?) and two seasoned campaigners from Glasgow, Neil Adams and Ross Barnes while Andy Inglis managed to climb a wet Centurion. Here are the teams below. 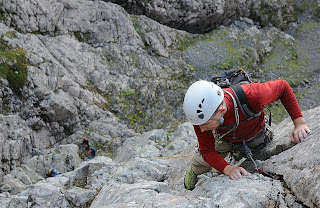 Well I managed to get onto a wet and scary 4c pitch while the other teams avoided this pitch on the right. Apart from that the route was dry. As we got higher the exposure increased with Zero gully below. 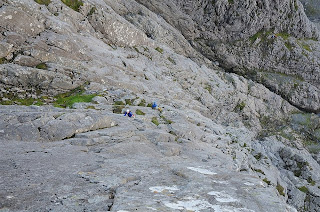 The minus buttresses and Orion faces are the largest rock face in the UK. The photo below gives an impression of the Alpine atmostphere. 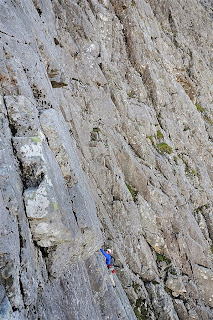 The first 5b pitch was led smoothly by Robbie and it is very soft for 5b and I had no problems climbing it with a rucksack. The following 5a pitch was much trickier with an akward layback mini-dyno. If you are short: good luck! After that a 4c pitch followed by the airy 5b crux traverse below an overhang onto a tiny pedestal above a lot of air. Here is Neil Adams placing a good nut, the best piece of gear on the traverse... 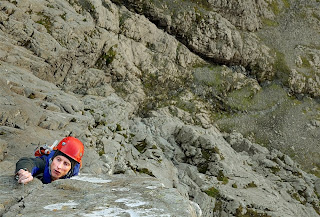 ... and here Neil on joining the mini stance. 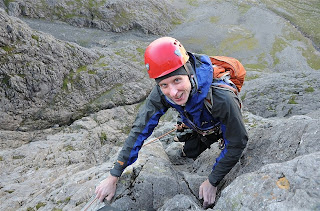 From there on climbing got progressively easier with a 4c crack towards the great terrace... 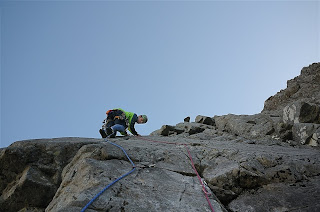 ... before a 4b pitch and then a final four pitch romp up Northeast buttress. 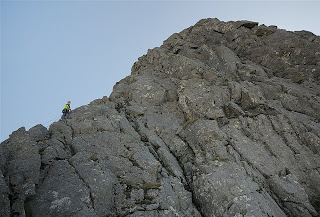 Here Robbie is on the Mantrap probably 4b (start the UKC post now) but traditionally Vdiff (but can be avoided). 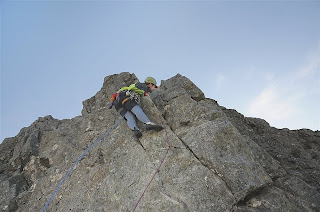 Well, a good end to a season with a good start and nothing in-between. Fourteen pitches of climbing.
HW
Posted by Ryan & Henning at 13:11 No comments:

Searching for new routes in Knoydart

After a 12 h+ session on Saturday we drove to the end of loch Arkaig, camped and got up at 6.30 am in order to search for first ascents in Knoydart. On the walk in I spotted what seemed a decent crag high up (there is no lack of outcrops in Knoydart) and after more than half an hour of steep bogwalking we saw an unprotected, vegetated, short, uninspiring slab. So we carried on walking... 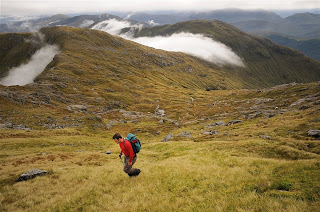 ... higher up we spotted the Old Man of Knoy, two blocks of snappy rock and thought about a first ascent. But being old (40+), wise (a rescue would take probably over half a day) and a bit of a chicken we decided against an attempt. Soon after we passed a slightly overhanging, 10 m high crag. But when having a try a flake of a size of a fridge moved and all first ascent dreams were put on ice. Nice views though! 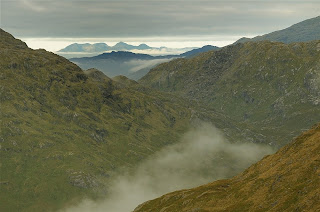 After hours and hours of walking we saw this 15 m high crackline and went to have a look. The right hand wall was soaking and the crack is two fists wide (we brought no gear for that) with a dodgy top out. Again, old and wise. 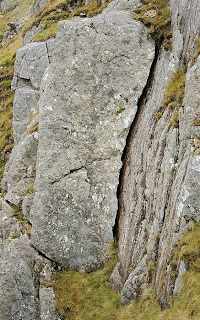 Finally the cliff that I had spotted on an earlier trip. Over 100 m wide, up to 30 m high, great lines but vegetated, crumbly, wet. Where is Mick Fowler when you need him? Or global warming? 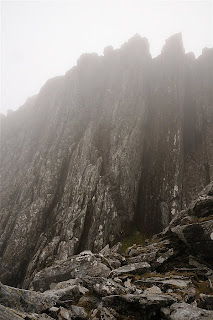 Again, nice views. The Isle of Eigg in the Atlantic. 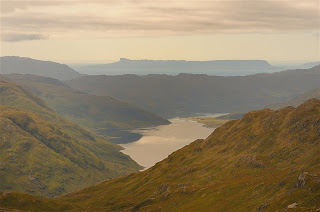 On the way down we passed a sizeable boulder and had to do something. We managed to get up a V0/1 boulder problem, termed the Knoydartonian. Here is the video on Youtube:
http://www.youtube.com/user/MEPMSc#play/all/uploads-all/0/TteI83kDlgk
HW
Posted by Ryan & Henning at 13:10 No comments: