Orion Direct to end it all

It is time to say good bye to a good friend, the winter of 2009/2010. A conference in Copenhagen next weekend, Easter in Spain, plenty of work: the chance of doing another climb is remote. This winter Dave MacLeod and Ines Papert have set new benchmarks for males and females, the average level has increased substantially aided by the best winter in more than a decade. As has been said elsewhere, the Scottish winter scene is alive and kicking due to unleashing, better training & adventure addiction even if some UKC Beckmessers and Stevie Haston (promotion by controversy Ltd) think otherwise. Never have I personally regretted the end of a winter more!

Orion Direct was one of the few climbs on my tick list that I didn't manage to climb this season and during the week I e-mailed Robbie whether he was available. He was but due to the mixed forecast we dithered between doing some sport climbing and going to the Ben. After a few e-mail suggestions from helpful insiders we went for it. I got up at 1.30 h, picked up Robbie at 2 h and with renewed motorisation (the old, trusty Highland Express Golf was exchanged with an Audi 'midlife crisis' A3) we reached the Ben at 4.15 h. No speeding officer, honest! The thermometer was below zero most of the time, suggesting that we made the right choice.

The walk in was equally speedy and we switched off the head torches when leaving the forrest so that the guards in the CIC hut would not see the opposition coming. We reached the bottom of the climb at 6.30 h-ish. Here is a photo of Orion Direct from 2007 with two climbers on the upper snowfield below the exit chimneys. 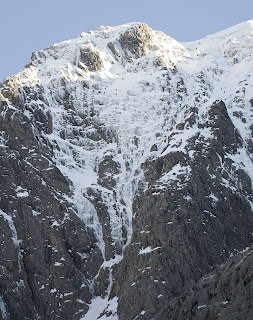 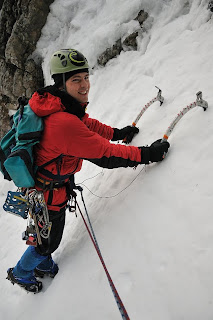 ... and I led the next two pitches and we then moved 'Alpine style' through the basin to reach a good belay below the crux. Here I am on the second pitch ... 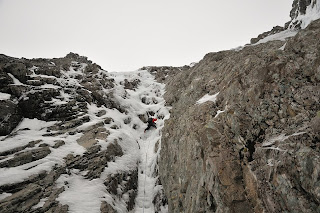 ... and here at the start of the third pitch. All good ice, well frozen after a cold night. 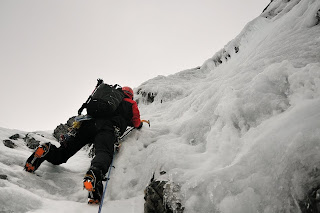 The crux was a traverse right but not having read the guidebook I went up the arete, saw steps further right and then traversed to the likely line. Ben Nevis thin face climbing and a little add on to a climb than needs no add on. Here is Robbie at the top of the arete ready to traverse after having taken a tied off ice screw out. 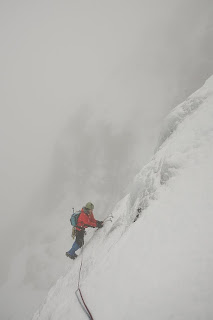 Grade III climbing on good snow ice with the odd ice screw towards the exit chimneys. It snowed a bit but nothing too bad. Unfortunately no views on a climb that would offer some of the best views in the UK. Plenty of atmosphere though. 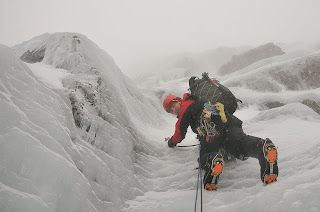 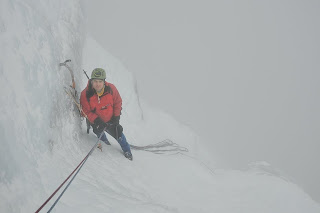 ... and traversing over to the belay below the exit chimney. Two nuts that had to be loaded in one direction to be safe. 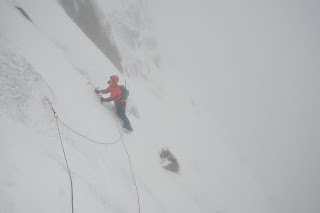 The right line was on the left with trickier, thinner options in the middle and to the right. The exit chimney contained good ice, some rock gear and was just enjoyable, atmospheric climbing. 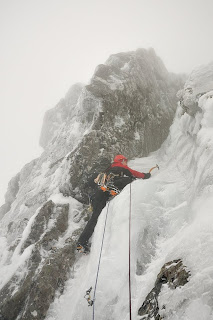 Robbie then led the final pitch to top out at 13 h. A shot at the summit shelter... 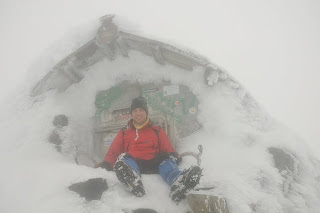 The weather people had predicted a hard overnight frost, sun and low winds during the day. Plenty of reasons to take the day off. Here is Helen walking into Creag Meagaidh... 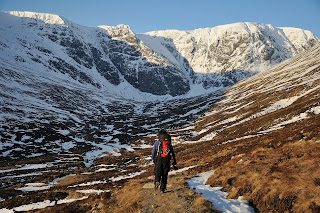 ... and here is our target, Smith's gully, on Pinnacle Buttress. We overtook a tired team that also wanted to do it but being first at the bottom of the route is what counts. Smith's gully is the cleft to the left of the highest part of the buttress and was climbed by Jimmi Marshall and Grahame Tiso in step cutting style in 1959 and is rated V/VI,5****. 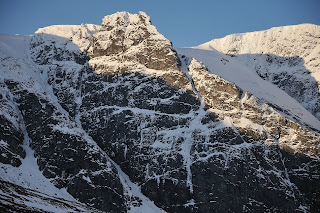 We had heard that the first pitch was the crux at the moment with a lot of steep, sometimes dinnerplating ice followed by an ice chimney. 45 m of lactate producing climbing all the way to the belay. 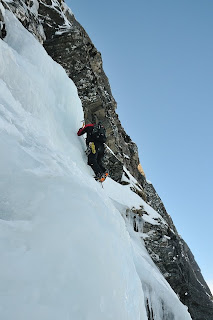 Helen then led the second pitch with good snow ice... 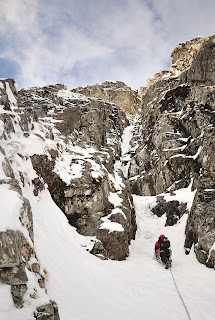 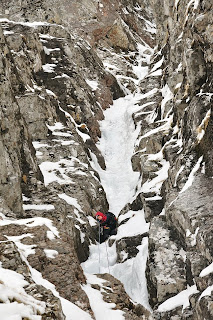 ... and I led the third pitch to the Appolyon ledge. No evidence for a recent Crab Crawl. Helen then led what is normally the crux . It was stepped, the placements were good and Helen climbed very well... 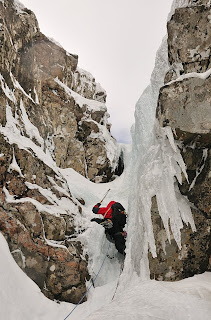 ... while I did the easy exit pitch to the sunny plateau. Here again Pinnacle Buttress and behind the fat Post face... 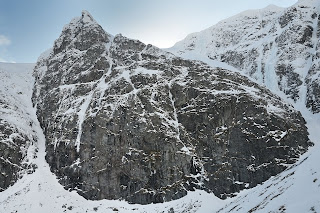 ... and here a last shot of the Corrie before leaving the shade which made photographing routes impossible. 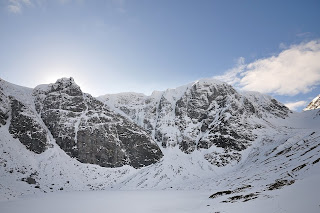 On the path there was evidence for large avalanches but today the whole place was well consolidated due to current freeze-thaw cycles. 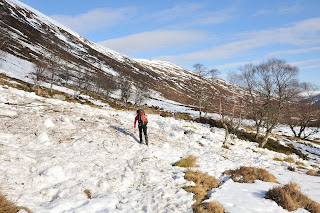 Foreword: Have you recently seen a middle aged male snorkeling in the Dee? I hope you have not phoned the police as there is a benign explanation for this incident. It was Mr. D. of Aberdeen who was in the Dee due to problems with his elbow also known as 'tennis elbow'. The story goes: During the summer Mr. D. climbed a lot and unfortunately his elbow got sore and various treatments did not provide relief. So Mr. D. announced that he would miss the winter climbing season. What Mr. D. did not reckognise was that the 2009/2010 winter would be a once in a decade winter and even climbs that rarely form were in condition and climbed by his climbing partners. So Mr. D. became frustrated and threw his ice axes in the Dee after announcing this act in an e-mail to his climbing partners. The elbow, however, got better, the winter continued and Mr. D. changed his mind about not climbing and jumped into the Dee in order to recover his ice axes. The Scottish climbing fraternity notes with great delight that the axes were found and that Mr. D. is climbing once again! 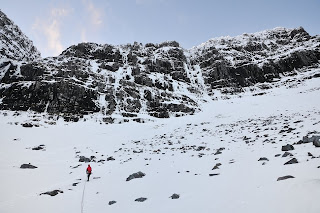 Below is the bottom of the climb. Poachers Fall is on the right and Salmon Leap is the icefall on the left. 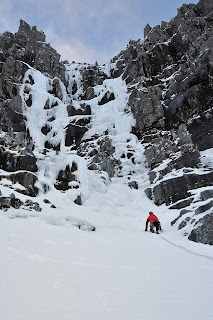 It had thawed on Saturday and we decided to start early allowing us to make best use of the cold temperatures and good ice. 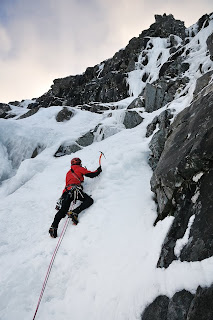 I did pitch two starting with an ice step... 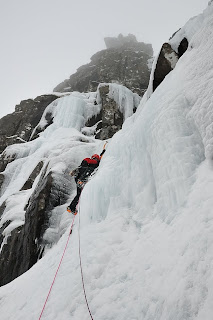 ... followed by a steep icefall to a good belay... 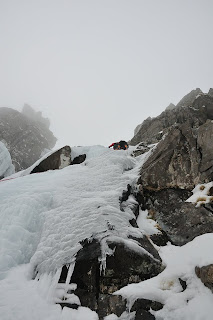 ... which Brian used to raise his low blood sugar by eating Soreen malt loaf. Nothing works better in winter! 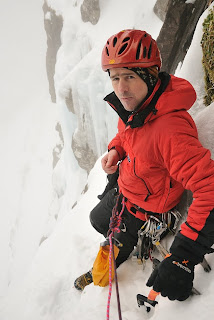 The last pitch started with some mixed climbing... 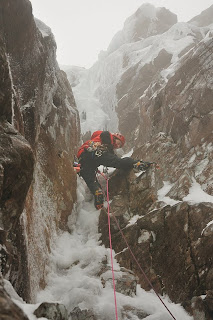 ... and the ice umbrella above can be avoided on the left. A little bit more of ice followed before reaching the easier upper snow field. We then descended out of the mist to be treated to a Torridonian spring view. 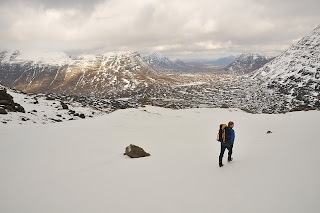 And from time to time we a bumslide. Another brilliant day, this winter keeps on giving! And good to see that Brian is back in the ring!
HW
Posted by Ryan & Henning at 11:44 No comments: