The Dubh Loch as a winter cliff is not often in condition. It is at the moment and the word is round. Thus the Aberdeen crowd and those that are part of the inner circle of Scottish Winter climbing sneak in to do the classics and new routes. The highlight is Guy Robertson’s and Pete MacPherson’s first winter ascent of ‘King Rat’, renamed ‘Super Rat’ at IX,9, and Ross Hewitt’s ascent of the ‘Mousetrap’ with Tanya Noakes. Other prolific first ascentionists were also active on the cliff but I don't know the climbs they did. The classic of the crag, Labyrinth Direct, had been climbed at least twice, first by an unknown team and then by the Aberdonians Mark Mosgrove and Michael McGhie who also did Hanging Garden Route and Funeral Fall on the same day.

I had Saturday available and managed to recruit Curly Stevo Holmes and Robbie Miller. In order to beat the Aberdonians, who would surely also go for it, we walked in early and with good pace from Glen Clova... 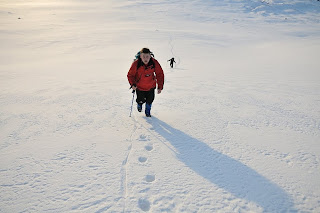 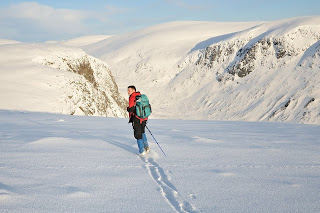 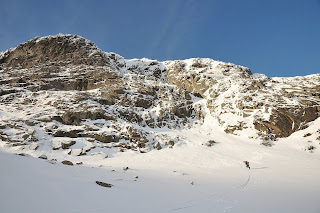 Robbie led pitches one to three which are easy angled snow after a tech3/4 entry and we spotted a team coming in from loch Muick. They were Ross Hewitt, Sandy Simpson and Neil Morrisson (who is the Michael Schumacher of Scottish winter climbing). 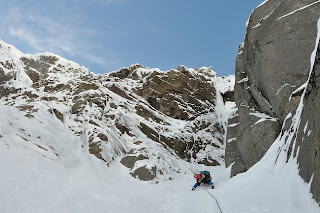 Stevo then started a tech 4/5 pitch to the belay in the cul de sac. 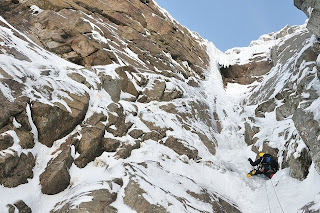 At the cul de sac we spent a long time cleaning the rock and got three pegs, a nut, a sling around an ice sheet and additionally attached ourselves to a rotten loop behind a thin flake. No single piece of gear was good but together it did the trick. When seeing the ice smear on the left wall I remembered words such as ‘30 ft of overhanging ice', or ‘An icicle broke off and touched nothing for 200 feet. Unique!’ from Andy Nisbet’s enthusiastic description in ‘Cold Climbs’. Stevo and Robbie took a lot of my gear, I was wearing my thin Marmot gloves, who were not that well insulated but had flexible, grippy leather, did not impair blood flow and were good for dealing with gear quickly. I racked the 13 cm and 16 cm ice screws on the right and the longer and super short ones on the left. After clipping the peg I placed my axes, kicked the frontpoints into the ice and climbed two moves to get my right foot on a flat hold and placed an ice 16 cm ice screw in the thickest ice. Pumped a bit already but a screw was in providing much needed safety. 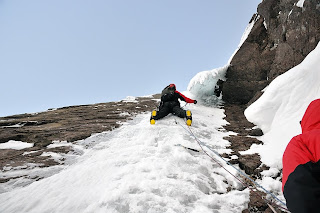 The placements went in well but for one who has not been at Rjukan or in Cogne it is tricky. I managed to mainly use my technical brain whilst the emotional one kept quiet: ‘straight arms’, ‘aim for the concave bits’, ‘avoid bulges’, ‘relax’ and ‘short shake out’. The large ice umbrella some 10 m above came closer and closer until I could wedge myself into a gap on the side of the umbrella which allowed a semi rest but must have made the belayers nervous as they were standing below the umbrella. 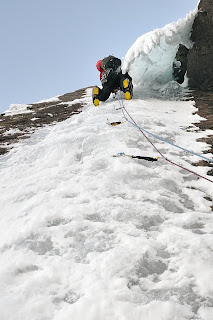 Above the umbrella the ice is still tech 5 but it allows bridging and the mad exposure of the left wall gives way to the comfort of a gully. And then finally, some 20 m higher the ice ends and easier angled snow starts. Another 10 m above there was some decent rock gear and I climbed the loose snow up to the cornice. Unfortunately while on the not very solid cornice the 60 m rope went tight signalling that this was it. A delicate down climb to a belay point on the slope below followed. Robbie and Stevo climbed the pitch as it was getting dark and at the top Ross, a bit short on ice screws, helped with our communication. A long walk back to Glen Clova under a clear, starry sky followed to reach the car about 14 h after we left it.

A serious climb and the exposed ice on the left wall must be one of the best ice pitches in Scotland. We felt elated that we manged to pick this rare plum but I have no idea how Jim Bolton and Paul Arnold managed it during the early days of frontpointing in 1972, before wrist loops, as it says in Cold Climbs.
HW (some photos taken by Curly Stevo)
Posted by Ryan & Henning at 11:49 4 comments:

Ross and I both managed to took a day off to go to the Dubh Loch to look at Vertigo Wall, a Nisbet and Robertson classic but the third pitch held almost no ice which, according to the guidebook, would be required. 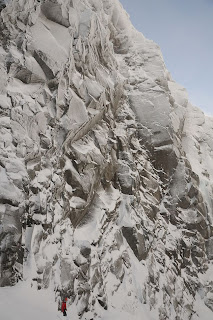 After a short discussion we changed plan and walked to the bottom of to the Labyrinth with the aim to do the Hanging Garden Route, another Nisbet & Robertson climb at V,4***. Here we are gearing up ... 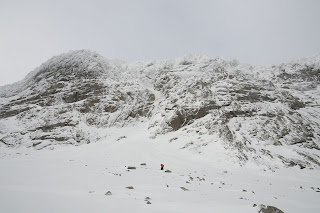 ... and here is Ross on the first pitch. 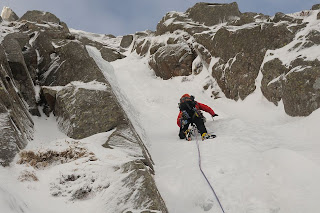 Higher up we traversed into the Hanging garden, a snowfield surrounded by iced up cliffs. 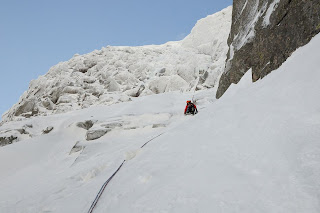 Expect scenery but not much gear. Taking a deadman is a good idea. 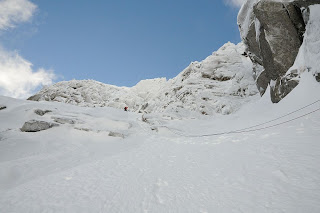 From the belay a tech4 snow ice gully leads to a Nevis-style belay, not helped by the fact that we only took 5 ice screws of which two were the shortest stubbies available. But the climbing was easy due to the first time placements that we found most of the time. Here Ross is approaching the belay with the Dubh Loch below... 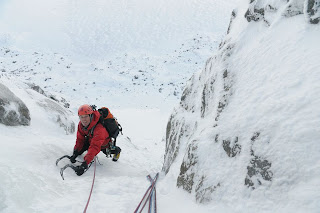 Ross then had the best pitch of the day going up an icy slab to an inverted triangular buttress. 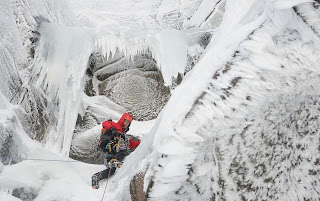 Here Ross is climbing the slab. 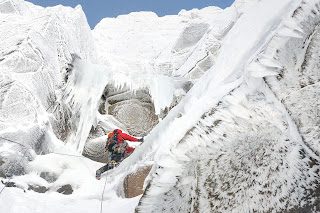 The last pitch was an airy traverse and then a climb up to the corniced rim. However, the route had been climbed recently by Steve Addy and Helen Rennard among others and so we just needed to follow the footsteps. Besides, we had blue skies and it must be very different to do this route in the mist not knowing how the cornice can be breached. Here is Ross in the sun on a nearly windless plateau. 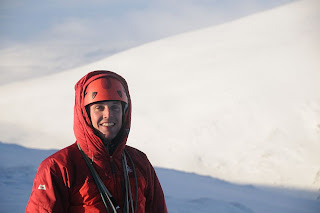 We then decided to do Funeral falls because I have little water ice experience while a lot of others had done ice over the Christmas period or have been to Riukan or the Alps. We walked under a 'Mackerel' sky... 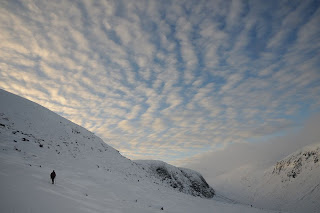 ... to climb the falls which are an excellent tech 4 ice pitch with good ice screw runners. Take more than 5 screws for maximum enjoyment. 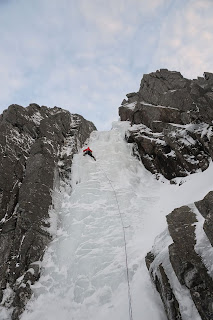 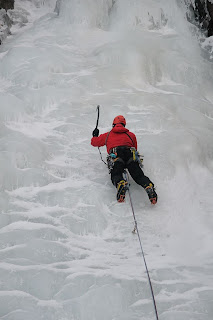 Who needs the Alps if conditions are like that. It is a little disappointing that the ice was lacking on Vertigo Wall but we were more than compensated by Hanging Garden Route and Funeral Fall. Happy bunny day! 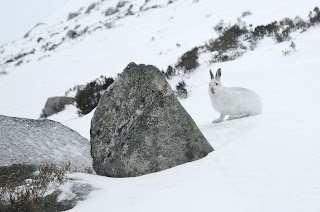 Finally, thanks to the three blokes who spent the night in the bothy and offered us water and whisky. It made the walk along loch Muick easier.
HW
Posted by Ryan & Henning at 15:53 1 comment: