Last weekend was forecast to be a cold weekend wedged in-between periods of warm weather. After considering all the options Robbie, Arno and I decided to go again to Ben Cruachan to climb on the North facing crag which is just to the West of the Cruachan summit. The routes are mostly well protected and whilst they are short they put up a fight. The walk in is 3 h. 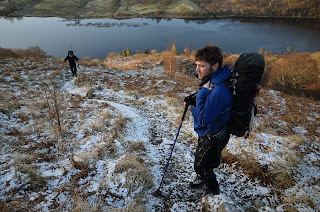 Here we just reach the dam of the Cruachan reservoir with Ben Cruachan in the sunlight behind. 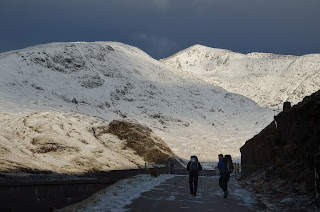 The clouds lifted during the approach and few things beat spring-like sun and snow. 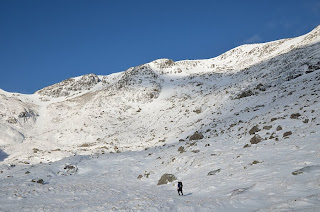 Here is Arno on the inital approach. 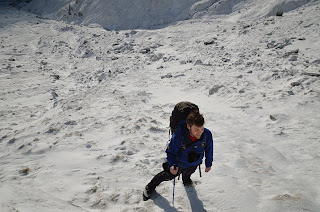 Higher up was a snow bowl and whilst we were nervous about avalanches it turned out to be perfect neve. So we decided to put the crampons on, get the ice axes out and climb directly to the summit. Fantastic mountaineering... 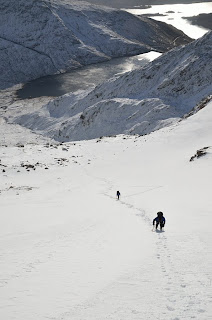 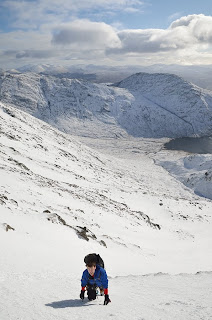 Here is Arno topping out with the Cruachan horseshoe and the highlands behind him. 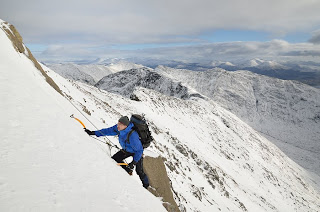 From the Ben Cruachan summit the buttress was visible with two climbers on it. They turned out to be Stuart the Postie and French Erick not only of UKC fame but also with impressive winter climbing ability. 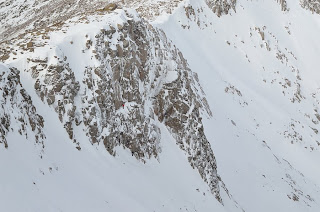 It just takes 5-10 min to reach the buttress from the summit. 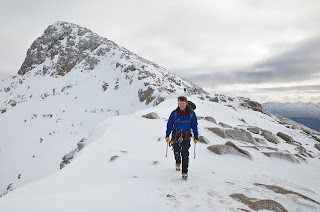 Our plan A line, Goldfinger VII,7*** was too lean but Dr. Noe, VI,6** to the right had caught plenty of snow during the previous days to justify an ascent. It was first climbed by Simon Richardson and Chris Cartwright in poor weather just before a trip to Patagonia. Here is Robbie, sans helmet (we make forgetting things a bit of a habit these days) demonstrating the 3D climbing that is typical for the Cruachan climbs. 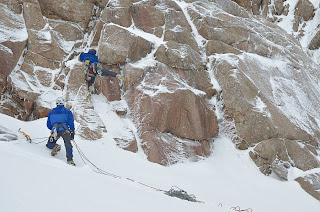 Here he is higher up on pitch one. 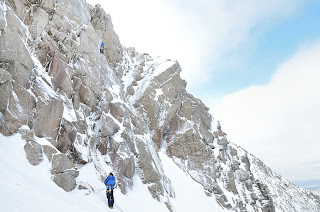 Pitch 2 did look OK from below but was a right facing corner with three three steps each time with little for  feet. As a result laybacking and careful footwork is required. Here is step one. 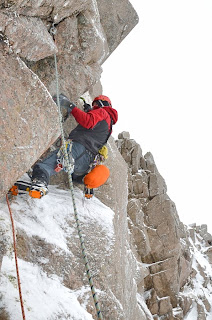 The crux was the third steepening. It involved stepping up onto a small edge with a good hook on the roof and some gear once unearthed. I took me ages but I got a sling around an iced up, small chockstone. The corner was smooth, steep and succumbed to Ninja-like climbing involving a chin up, throwing my foot for a heel hook on the right and then a pull onto the neve above. Very good value tech 6 or maybe harder. Robbie took over again and despatched the last trickier move in style. Instead of walking around the corner he went straight up with good hooks and gear. 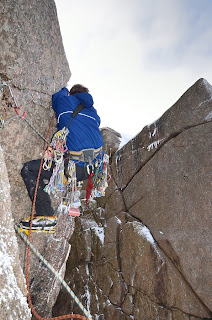 On the way down of course some bum glissading, a necessity for these old legs. Here is Robbie finishing a good one... 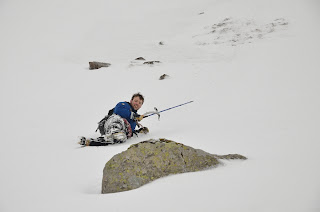 Cruachan is an excellent venue for those that are fit and enjoy the mountaineering bit of the day as much as the climbing bit. It is especially good for folk that climb V,6 or want to push their grade.
HW
Posted by Ryan & Henning at 13:26 No comments:

Robbie, James, Andrew, Gunnar and myself met in Glen Clova for a short day. And then I realised that I had not packed my boots. No boots = no crampons = no Wild Cat Wall, V,6**, our first objective. I followed Andrew and Gunnar into corrie Fee. Their revised objective was to climb Look C gully IV,4***, the classic of the glen which had some ice on the crucial ice pitch but it was unclear whether it was enough. 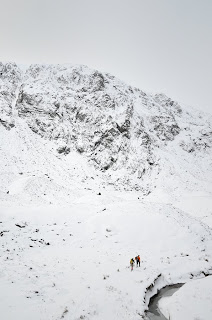 I decided to climb a buttress to the left at maybe grade II. A few slightly steeper bits but the fell running shoes had sufficient grip to get up these bits. Here is the view over lovely Glen Clova from higher up. 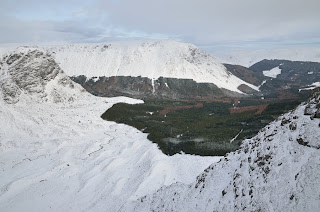 I then continued to Driesh and some blue skies emerged. 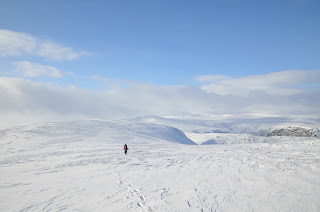 From the trig point I went East and descended via bum glissade into winter corrie where I saw Robbie and James on the second pitch of Diagonal Gully, III***. 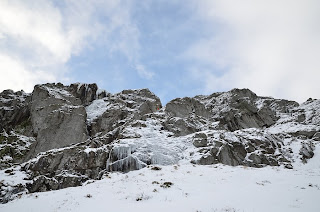 Here is a picture of James zoomed in showing the ice that had formed over the last, cold week. 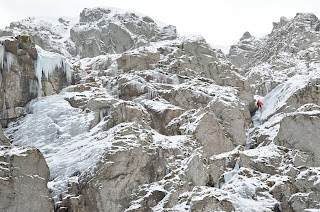 I decided to climb an easier gully to the left and saw John Wilson and Jim (?) on Backdoor Gully II. Here is John climbing a small ice step, the trickiest bit of the route. 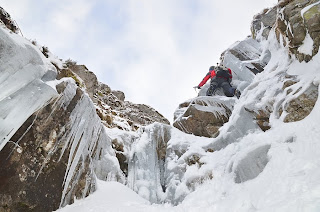 Sans crampons it was a good opportunity to practice step cutting, the technique before front pointing changed ice climbing. It all went well and soon I passed the Aberdeen team to meet a surprised Robbie and James in the basin. Here is Robbie ascending to reach the steeper upper section of Diagonal Gully. 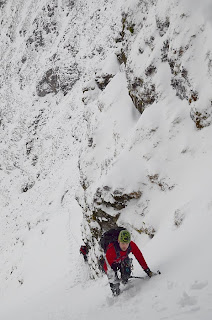 Sans crampons & sans harness I decided to better follow backdoor gully which crosses Diagonal Gully in the basin and then follows a heathery/turfy line to the right which is much more suited to climbing without crampons than ice and hard neve. Here is Robbie climbing the steeper finish of Diagonal Gully... 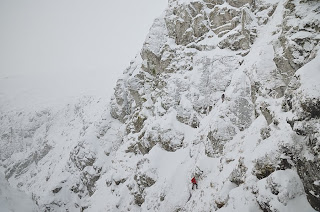 ... and here is Jim topping out of backdoor gully with James belaying Robbie in Diagonal Gully below. 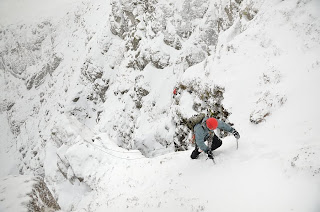 Diagonal gully had a small cornice which Robbie is climbing here in an exposed position... 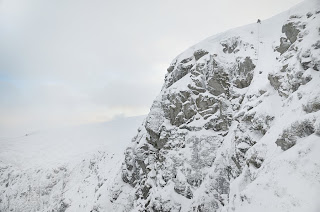 ...and James is following. 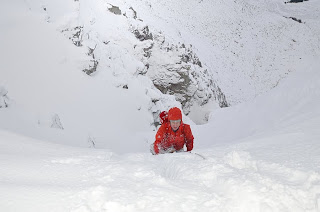 At the end everyone managed to climb something and it is good to know that no boots does not always mean no climbing!
HW
Posted by Ryan & Henning at 10:21 No comments: