On Saturday the 8th of February Tim and I cycled down Glen Prosen. It had snowed during the night and the forecast south-easterly gales would bring South Craig into winter condition. Here is Tim cycling ... 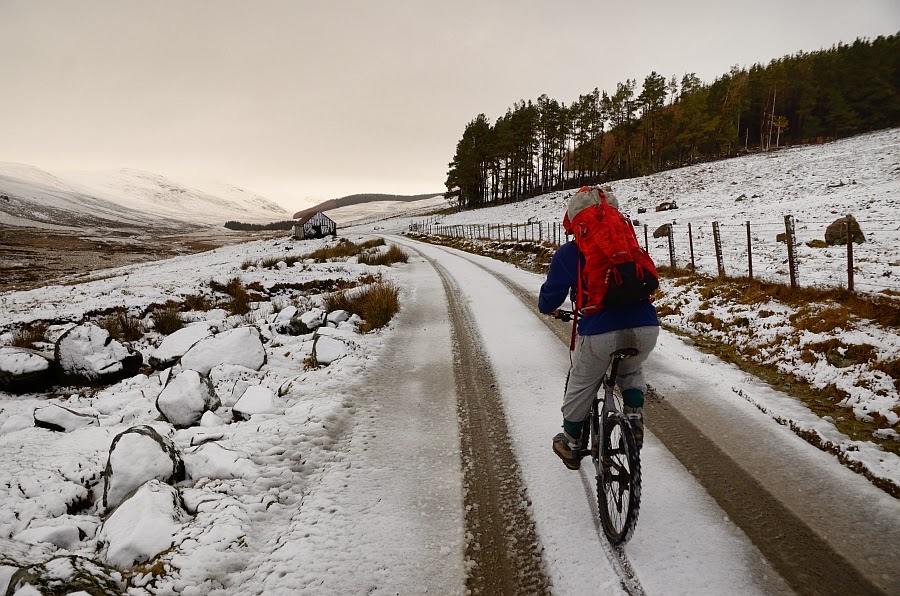 ...and here he is approaching the corrie. 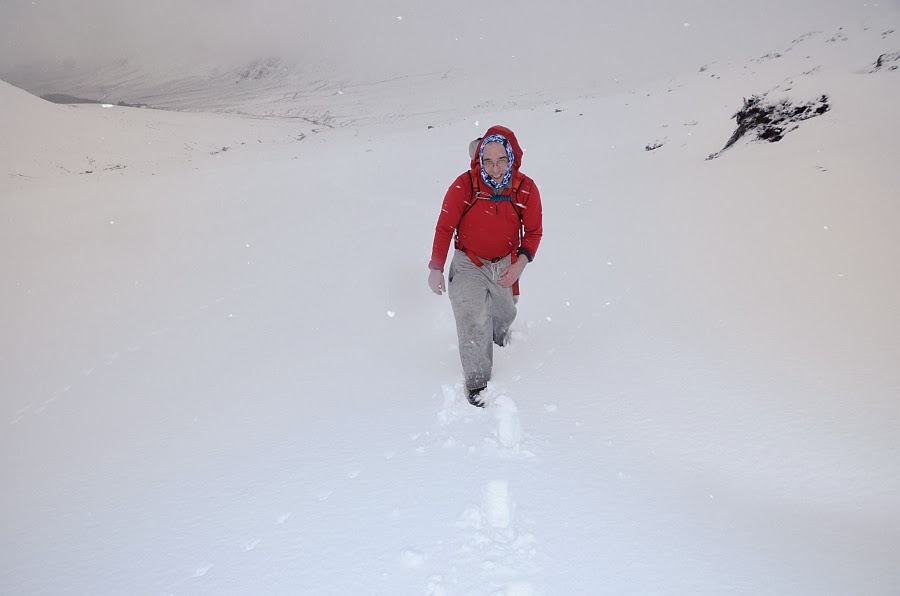 It was all in the clag but at the last minute South Craig appeared in front of us. Icicles were everywhere, shaped like horns of wild animals by recent gales. It is a steep crag, often overhanging with few opportunities to climb routes at a manageable grade. The main line on the right of a crag is a gully line starting in the triangular niche just above Tim. To the right is 'Brian's or Southern ramp', a IV,4 which Forrest, Polish Pete and I had climbed last year. I had walked in 4 times to look at the gully line and finally there seemed sufficient ice in it to climb the two step crux corner. 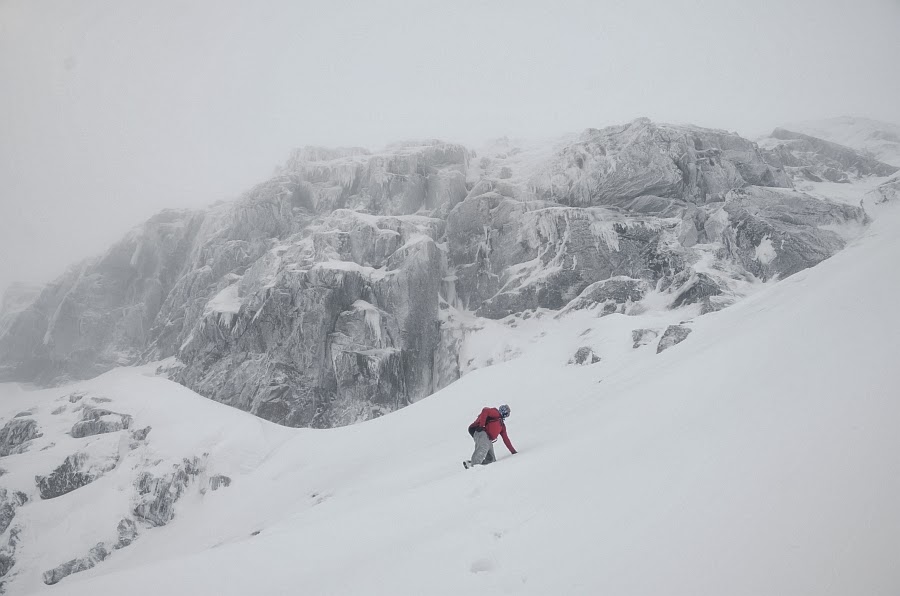 Here is Tim just below the route that we wished to attempt. I did not bring ice screws and tried for 5 min at the bottom of the crag to screw one of Tim's 80s Ebay screws into the ice but to no avail. At least we had a Black Diamond Ice hook and the ice section was not that long. 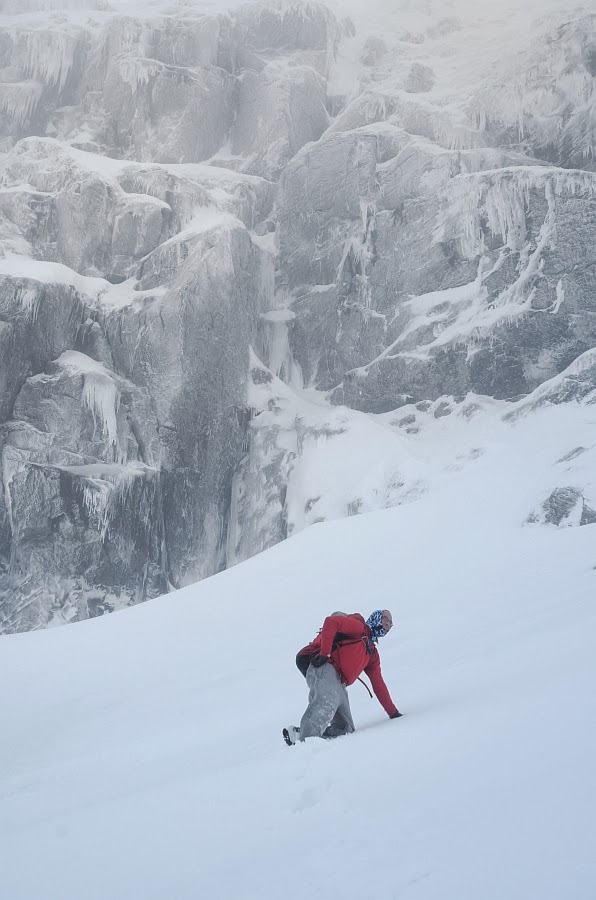 Due to the lack of ice protection and remoteness I did not climb the initial 8 m of steep ice (Tim climbed it on second) but instead ascended the neve ramp to the right. I ended up in a niche with a 3 m high rock blade in the middle. In contrast to a previous attempt there was a tree trunk sized ice column coming down from the rock blade and the back wall was encased in ice. I used a sling around the column as protection and then gently back and footed upwards, carefully picking my front points into the column. Soon I reached good snow ice on top of the rock blade and to the right there was a flake behind which I fixed a nut and peg. The crux was above: 5 m of steep ice with many daggers pointing my way. I spent probably half an hour hacking the daggers off, fixed the ice hook and went for it. It was steep but needed a delicate approach. It reminded me of the ice crux on Sticil face. Finally I reached the roof, got two good placements and bridged out of the niche into an easy gully. Here is a photo down the niche showing Tim belaying. 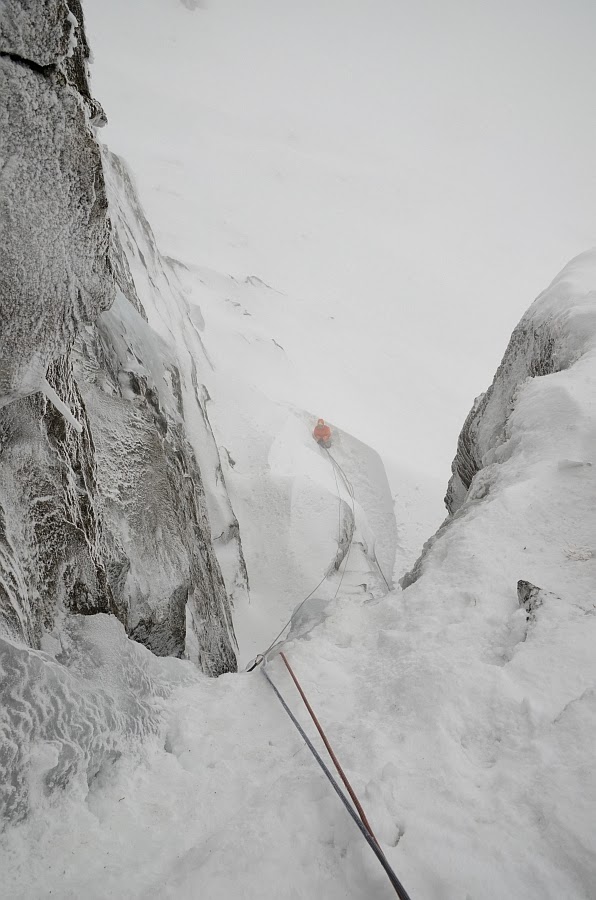 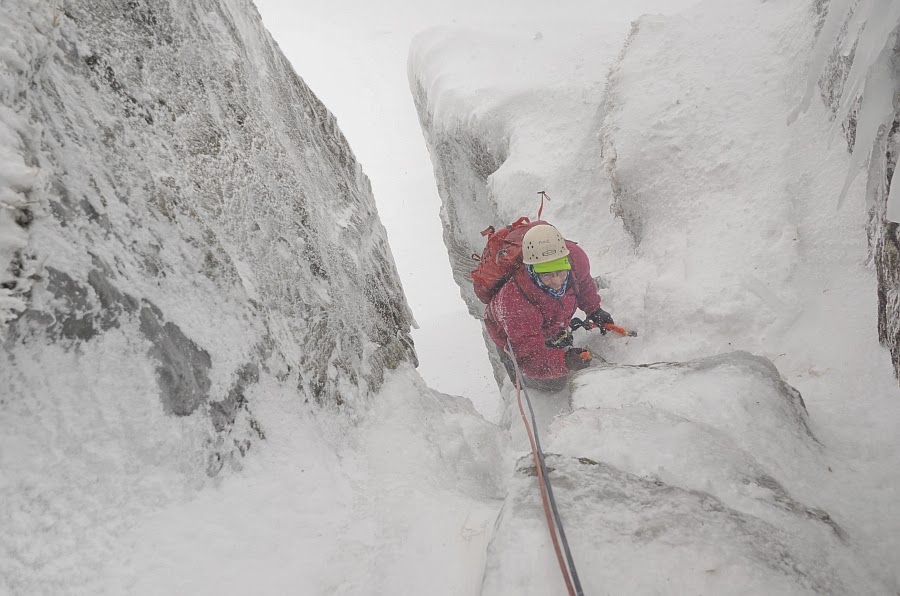 Here he is approaching the belay, happy, as we knew that the route was in he bag. 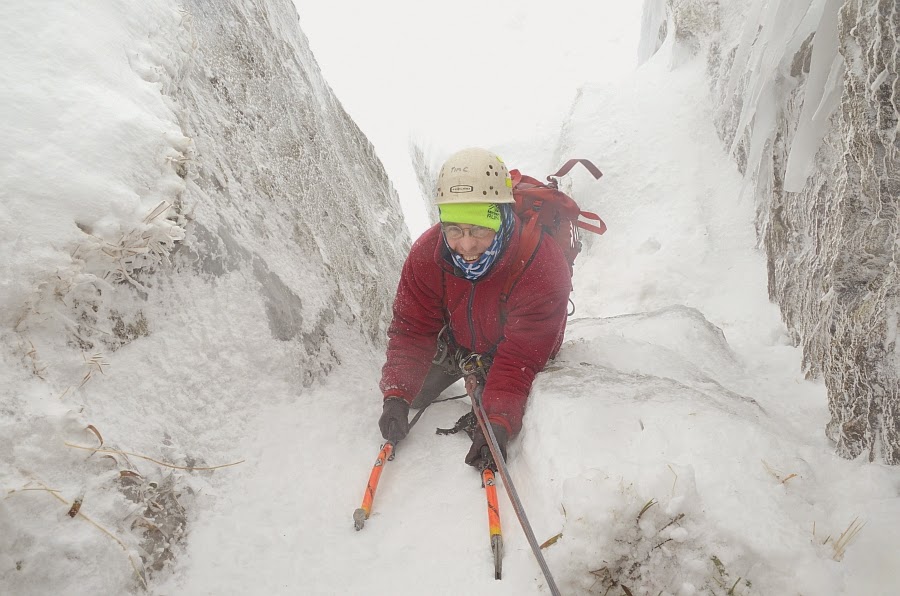 We were stopped by a cave and as there was no gear and as it was easily avoidable we climbed out of the gully and back in above. 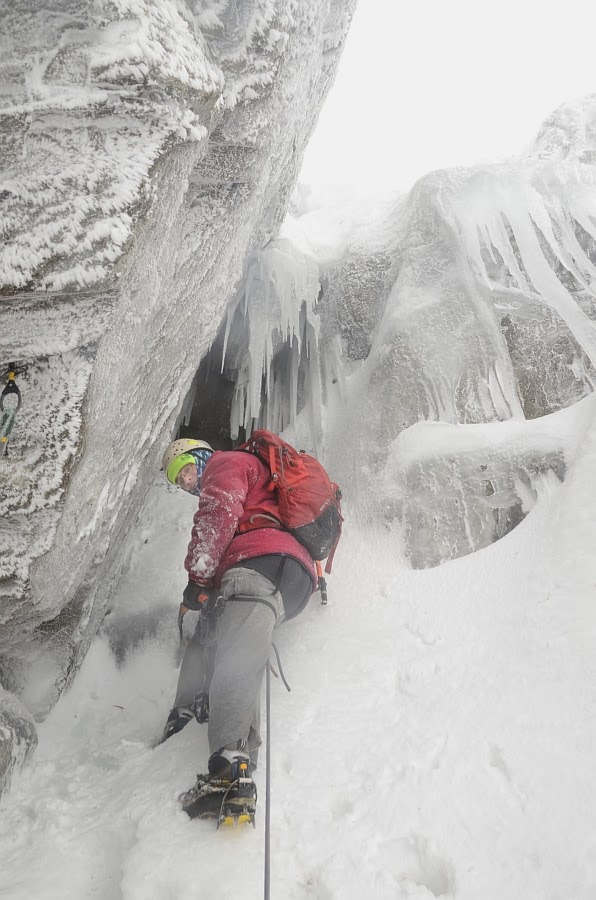 Here I am starting the ice cave section. 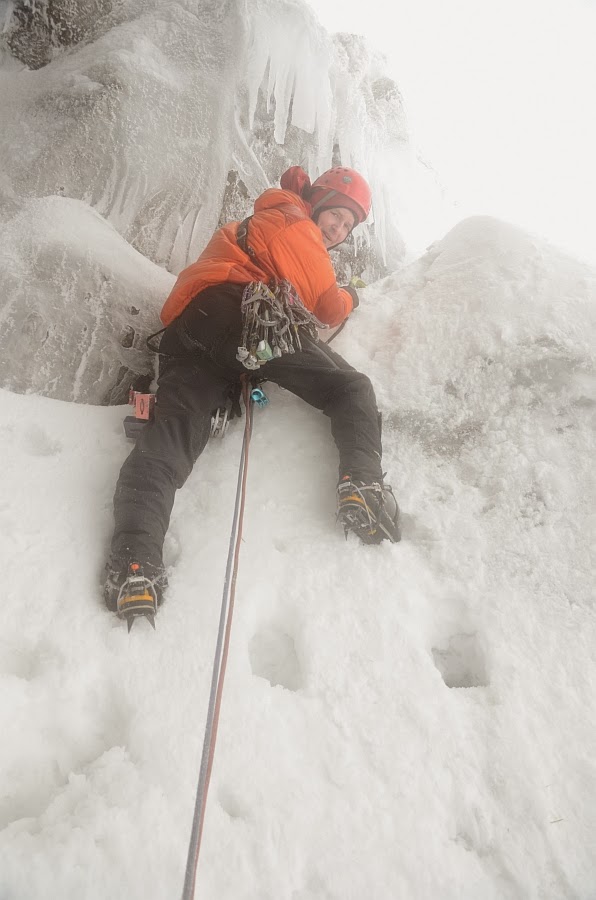 We climbed the last bit together and arrived on a stormy, white out plateau, packed our gear and carefully walked eastwards and then carefully descended on good neve to the bottom of the cliff. Here is Tim packing our gear on the plateau... 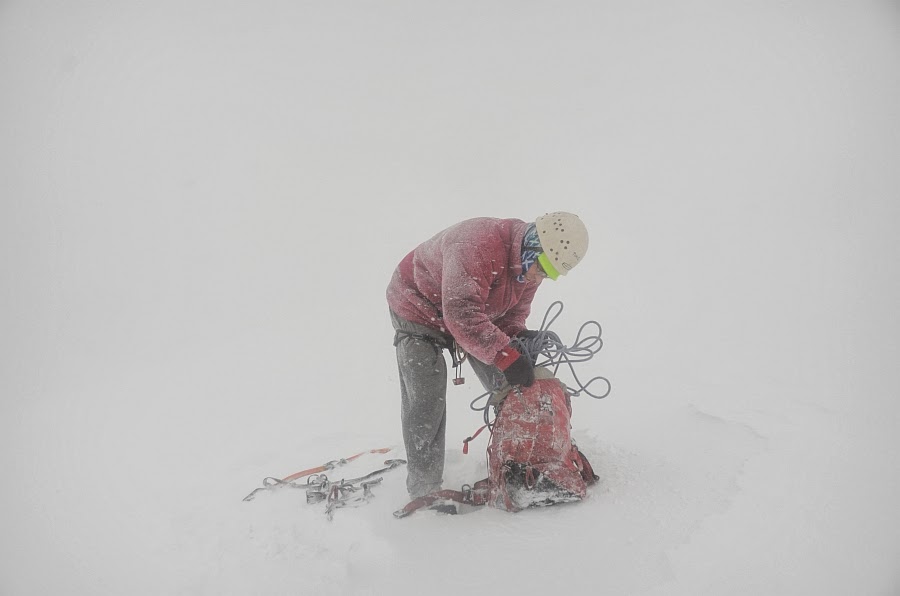 ... and here we view our route from belown. The crux steep ice is visible above the triangular niche. Brian's ramp is to the right where the icicles hang over the edge. 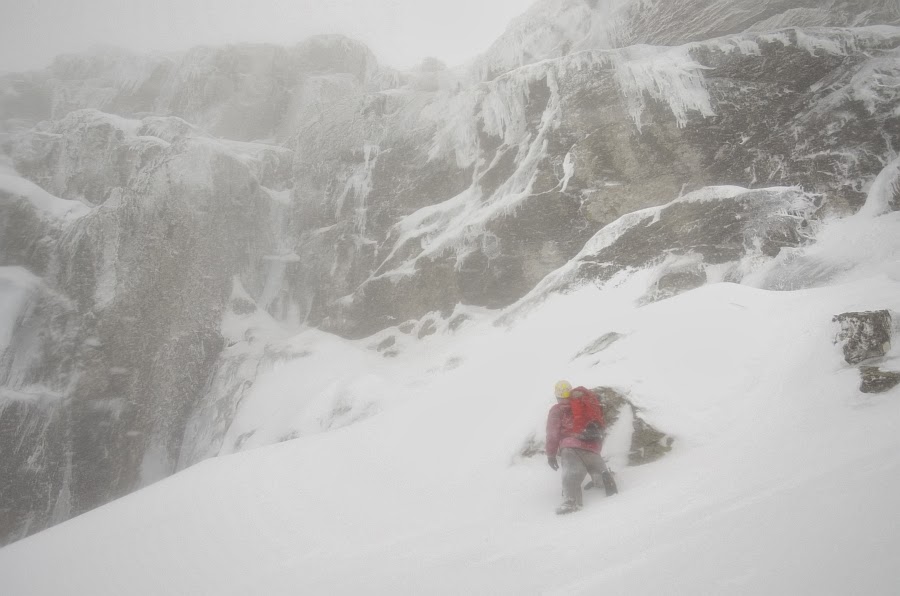 Here is Tim standing below the optional initial icefall. However, bring screws or skill when attempting it. 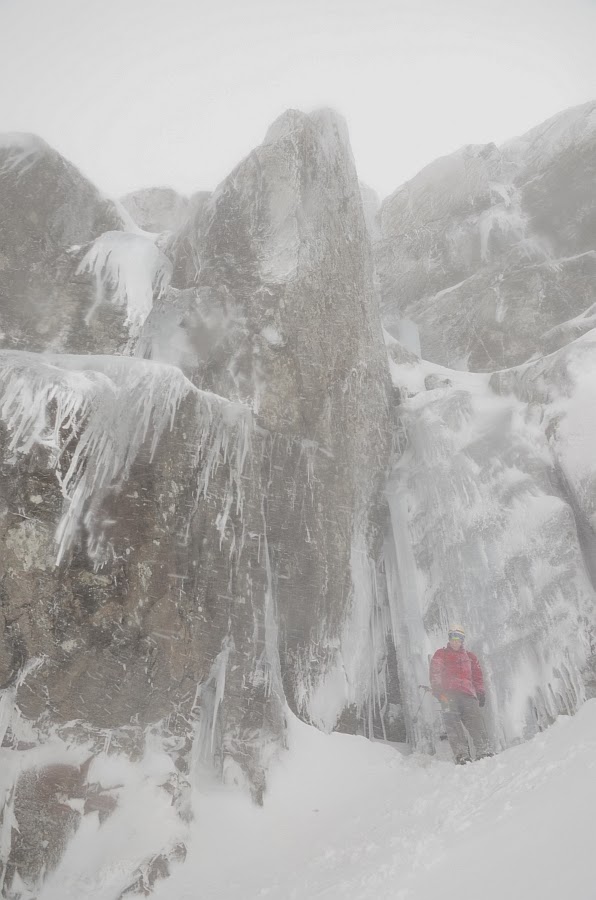 We named the route Freebird and graded it V,5*. Many in Aberdeen will know the background for the route name.