Robbie Miller, Andrew Melvin and I were looking for more Cairngorm adventure climbing and decided to climb on Creag an Dubh Loch. We spent the night in the bothy... 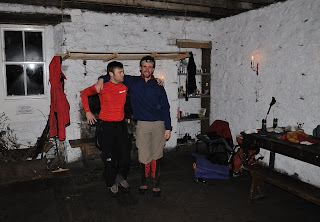 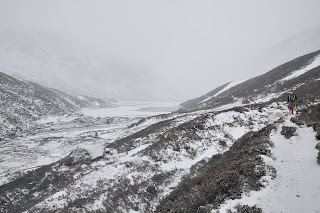 ... and didn't stop all day. The White Elephant did not have enough ice for an ascent but when we walked up Central Gully we saw that Vertigo Wall VII,7**** had good ice. During the first winter ascent in 1977 Andy Nisbet and Alfie Robertson forced their way up the climb with some aid and a bivouac. A landmark achievement for 1977. Andy Nisbet then went back with Andy Cunningham to do the first free ascent in 1985. The route is described in the Cairngorms guide as 'an outstanding mixed route with turf, rock and ice, near the summer line'. Also given that sub zero temperatures and a lot of snow were predicted for the whole day we were confident that the top wall would not be stripped by the sun. Robbie led the first pitch quickly. 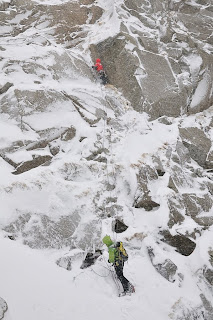 The photo below shows the initial two pitches which reach a belay next to the icefall where it is thicker. 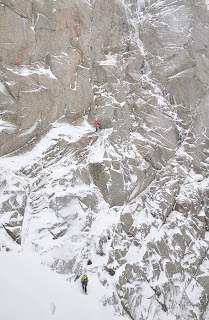 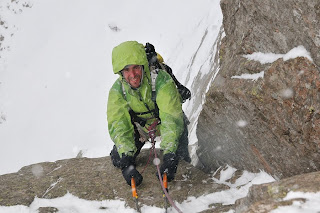 I did the second pitch which starts with a move onto a detached block. 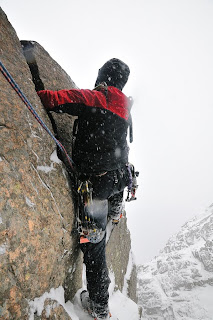 After that some good and tricky climbing on hooks and turf with continually increasing exposure. 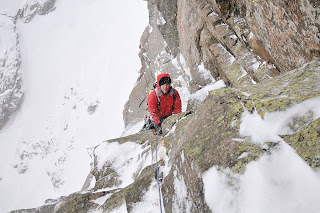 Andrew, with the experience of many Nevis ice routes then led pitch 3 with confidence. It comprises of featured ice requiring technical ice climbing. 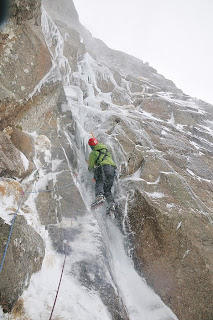 Here is Andrew higher up going for the steepest section... 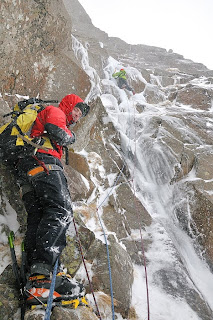 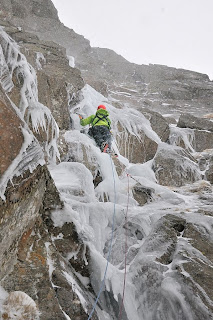 ... and here he tackles the last steep bit before the belay. 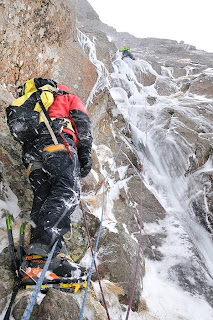 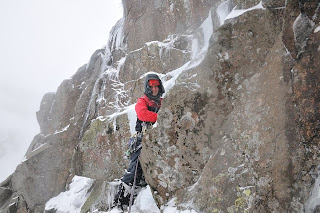 Some thin ice led to a flake (the 'creaking flake' I thought) below an overhanging wall. Unfortunately the lens was steamed up. It is steeper than in looks. 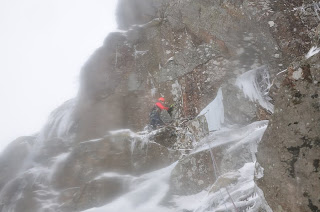 A photo of the pitch from the other side of the gully, taken two weeks later, is below. 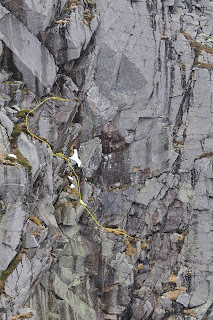 I shuffled forward on the diminishing mini ledge with the wall above pushing me out. Luckily I got a decent torque, a placement behind a block and let my feet swing round to enter the 'shallow groove'. A scary move given that the wall in this section is gently overhanging with a large drop below (the icicles are an indicator of verticality; I had to chop most off as they were in the way). Well that's why it is given VII,7, I thought. 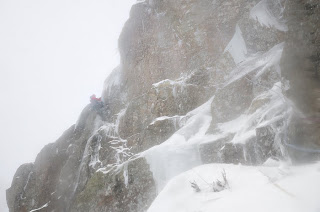 Some easier climbing up rightwards to a good belay followed. Above was a steep chimney which we thought might be the 'easier but still steep' last pitch as it is described in the guidebook. But when Robbie set off and retreated it dawned on us that we had climbed the wrong line. The photo below from a previous visit shows the normal line of Vertigo wall in red and the 'More Vertigo' variation with the distinct hanging icicles in yellow (large photo format). It looks impossible on this topo but the photos above show the small ledges that make the way to the icicles possible at possibly tech 7. The green line is the 'easier but still steep' pitch 5 or at least that's what we thought until it dawned on us that we were off line. Maybe a suitable finish for the leading Cairngorm pioneers Guy Robertson, Pete MacPherson, Iain Small and Simon Richardson (and many others of course)? 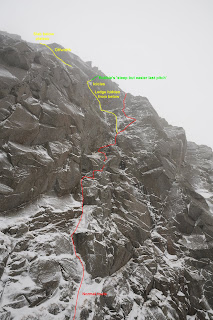 Here another topo from the opposite wall. I had taken it two weeks later when it had all melted. 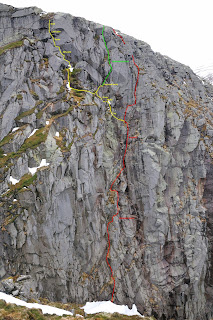 Again our variation in yellow and the potential Robbie escape in green. I became tense as I needed 2 h for the previous pitch and we did not know what was lying ahead. Easier turfy ground was on the left and I remembered that there was a winter route to the right of Sabre Cut which we now hoped to reach. Robbie climbed initially quickly but then the rope came back and after a while he shouted 'safe'. Here is Andrew following the pitch. The photo also shows the exposure at this stage. There are several summer routes in the mid E-grades below. 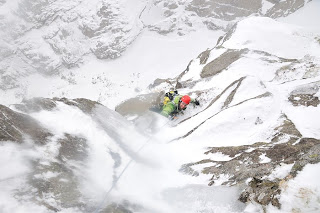 Robbie belayed near a left-leaning offwidth chimney and the plan was to climb the offwidth hoping for easier ground above. A topo of the last pitch is shown below. 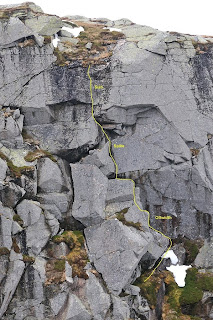 The offwidth was hard to start as it was teflon smooth inside and as there were only tiny edges for crampon placements on the outside. I managed an au cheval move but there was nothing to hook inside the chimney and after a lot of trying I cammed my lower leg into the offwidth, leant out wide to the left to gain a good hook in a crack near the arete on the left. I took a deep breath, uncammed my foot and swung left. Luckily there were another good hook and gear above. Some more tricky climbing to a spike and it all seemed to end maybe 10 m below the plateau with a steep slab above an overhang. I managed to fix a peg and nut below the slab and got higher up on an arete to start the slab. The slab was the scariest climbing I have ever done: thin hooks out of balance with no gear and the central gully wall exposure below. Somehow I managed to inch up the slab to a position where a big tuft of turf and safety were near but yet so far. Some moss did not even yield a marginal placement but finally I excavated a poor sidepull, kept the axe steady, placed my front point out of balance high up and with a lot of stretch just about managed to whack the axe into the turf. The left axe followed and I made the sweetest pull up of my life, scraped my feet up, ran a few steps, fell mentally and physically exhausted into the snow and shouted 'safe' into the void below. This last move was the psychological crux of the entire route and the last pitch was the hardest pitch that I have ever climbed. Robbie and Andrew topped out just before 19 h. We stayed roped up in central gully which we descended on the side to avoid windslab and after a long, long slog through deep snow we reached the cars at 23 h. Here is Robbie, smiling as the cars where close. 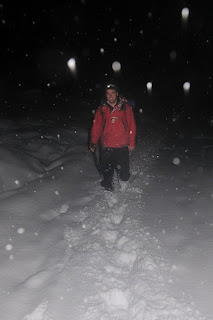 Here are Andrew and Robbie exhausted. 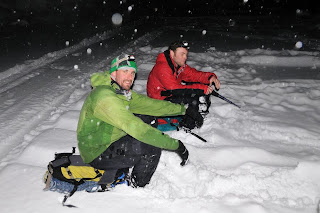 Grade? We are unsure but pitch 4 and especially pitch 6 felt technically harder and bolder than the first three pitches of Vertigo Wall and thus we suggest a technical grade of 7/8. We feel unable to give an overall grade. Also as for stars, the variation pitches are a wild journey through some unlikely, vertigous terrain with ice, thin ice, turf, snowed up rock, two swing moves and those psychological metres up the final slab. The only star-reducing factors are an easy fifth pitch and the fact that the line is not straight up. Again we leave it to others to judge this but it is well worth the effort. The epic did not end there. I had to leave my car in Glen Muick and Andrew just about managed to get out. We reached Aberdeen around 1 h in the morning and Andrew and Robbie must have arrived at Dundee at 3 h. Here is my car. 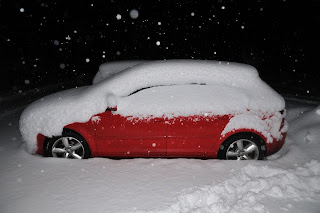 This morning my camera didn't work just to add one more to the epic (it eventually came back to life). Finally, Adam Henly, a partner of many ascents, gave me a lift to get the car out of the Glen Muick car park on Wednesday. HW
Posted by Ryan & Henning at 07:06 1 comment: