Climbing: The North East of Scotland is experiencing the wettest summer since I came here and so climbing took place mainly indoors. Apart from that a few evenings repeating routes from previous years with a bolt clipping 6c+ at Kirrie the highlight so far. It is frustrating for many of us here.

Arisaig sea kayaking: I was increasingly fed up with the poor summer and needed an adventure. So Ana and I decided to go sea kayaking in Arisaig, a good place for beginners. I got a Trak T-1600 folding kayak from Ebay and Ana rented a Valley Avocet from http://www.seakayakhighlands.co.uk/ which were very helpful and are recommended. First we were unsure whether to go because of a windy and rainy forecast but an adventure underdose made us pack up the car and drive west. After a rainy night clear skies over the Arisaig bay. 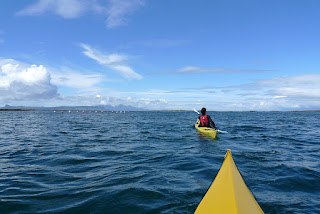 The bay is fantastic with inquisitive seals everywhere. 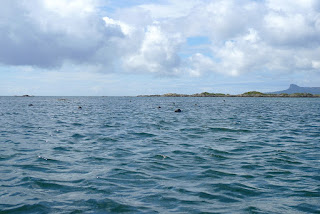 Arisaig is known for its Caribbean beaches. We landed on one for lunch in the sunshine. 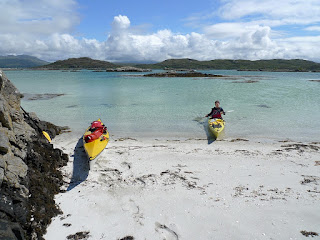 On day two we paddled out onto loch nan Uamh. A much bigger and open loch where bonnie prince Charlie left Scotland on the 20th September 1746. We paddled along Robinson Crusoe islands noting climbing potential here and there. 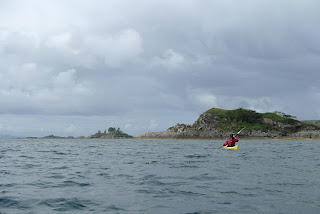 We stopped on a pebble beach on one of the islands for lunch. At the left is my folding kayak which doesn't really look like a folding kayak and all fits into one heavy, XL-sized golf bag. The principle of the kayak is that three hydraulic jacks tension a heavy duty aluminium frame within a heavy duty PVC shell. It is the kayaking equivalent of the Brompton folding bike. 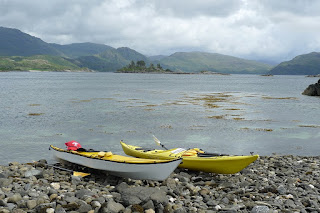 We then crossed the loch which was 2 km wide. The swell got bigger and bigger and I kept the camera in the bag. When we got closer to the end of the loch the sea calmed, the sun came out and we made the last few relaxed strokes to the car. 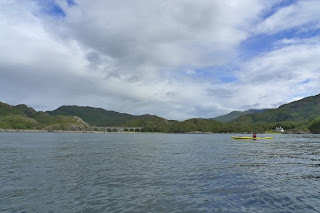 The trip to the West is definately recommended and doing a course with Glenmore lodge or other providers followed by renting sea kayaks is a good idea.
HW
Posted by Ryan & Henning at 16:08 2 comments: