Journey to the Bell Rock lighthouse

The Bell Rock lighthouse is an iconic feature of the North sea coast of Scotland. It marks a piece of sandstone which had cost the lives of thousands of seamen 18 km offshore. From 1807 to 1810 Robert Stevenson and 60 men erected the lighthouse using Aberdeen granite. Here is a BBC video report: http://www.bbc.co.uk/news/uk-12330017 and here is an article about its construction:
http://www.bbc.co.uk/history/british/empire_seapower/bell_rock_01.shtml.
The coordinates are 56° 26.065'N 002° 23.230'W or grid reference: NO762269.

Since moving to Scotland I saw the lighthouse from the coast and always wanted to see it up close. Unfortunately I was unable to join an earlier kayak trip but when Joan mentioned a second trip this year from Kingsbarns, which is 21 km away, I was very keen. We were nervous about the fog but Tim and Mike are experienced sea navigators and they were joined by Joan, Ian, Robbie and myself. Here we are about to launch. 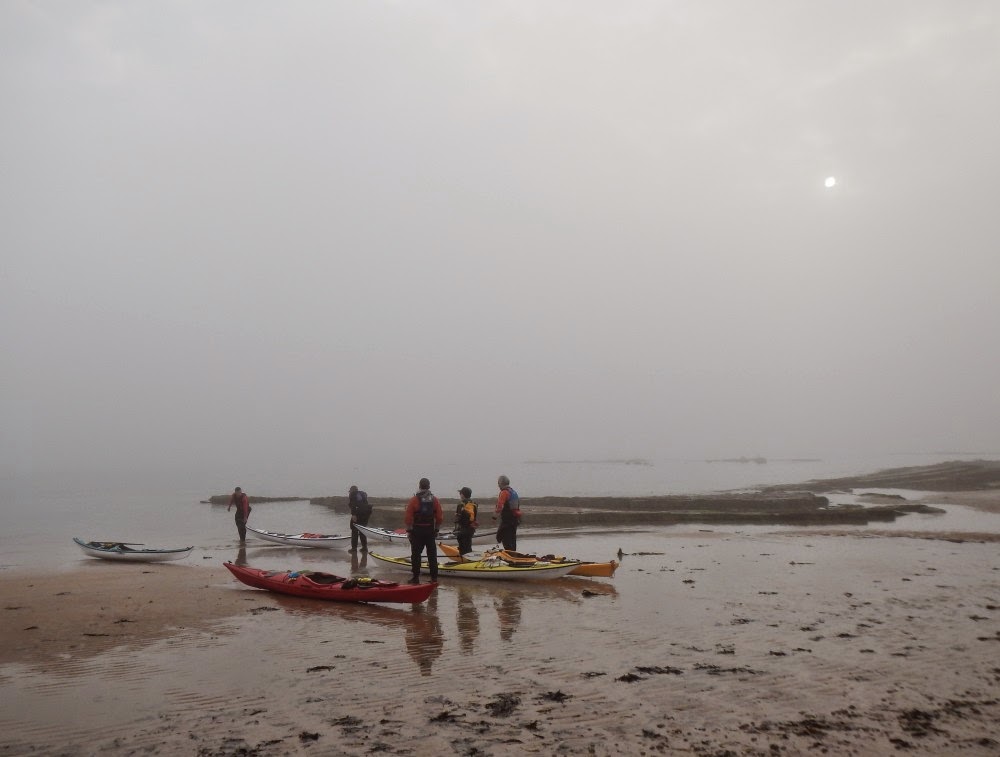 Conditions were exceptionally calm but the mist persisted. 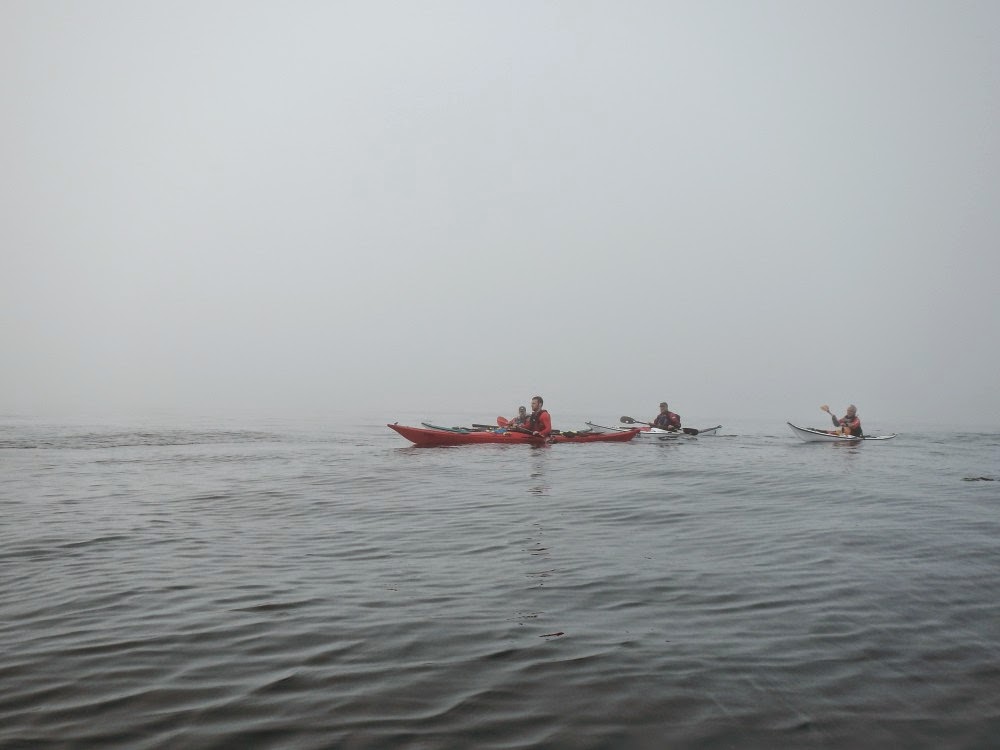 Here the A team is checking our navigation. 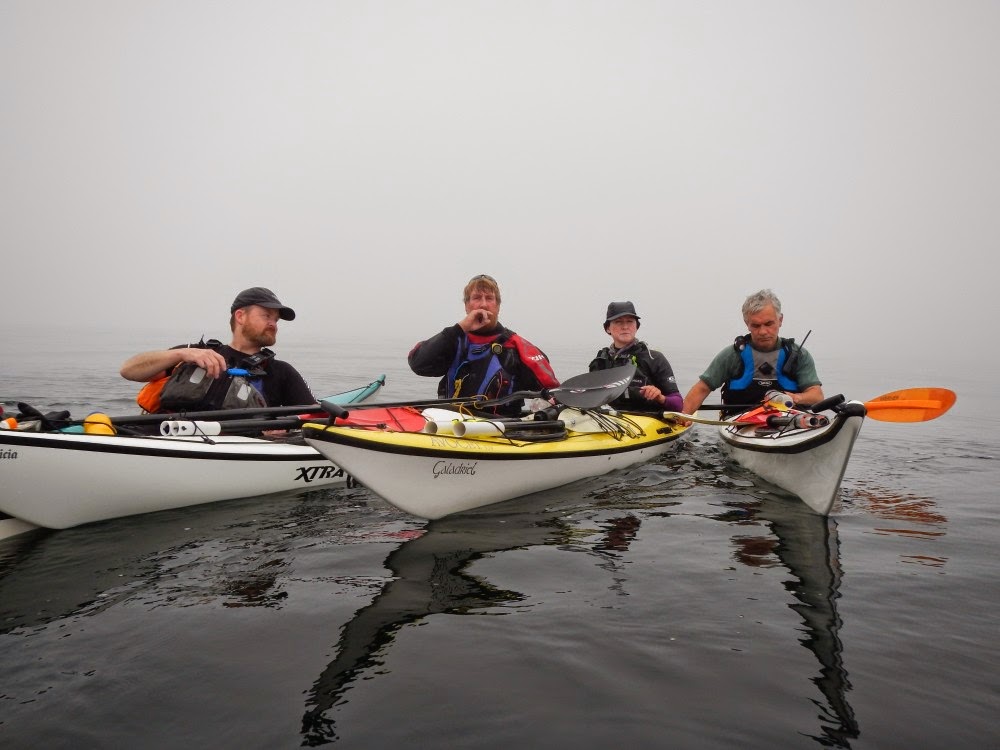 After 2 h 30 min we heard a diesel engine of a large ship and sounds which were generated by the fog horn of the lighthouse. Here is Robbie approaching the ship which is moored near the Bell Rock. 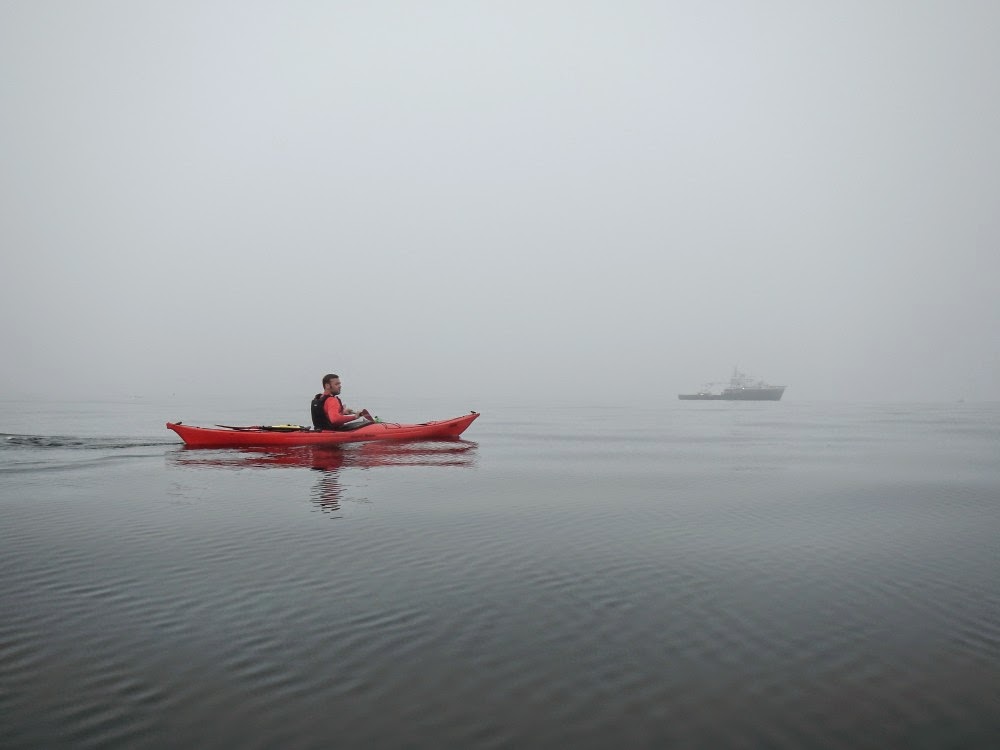 Finally the Bell Rock lighthouse emerged from the mist and at the same time a helicopter flew above. 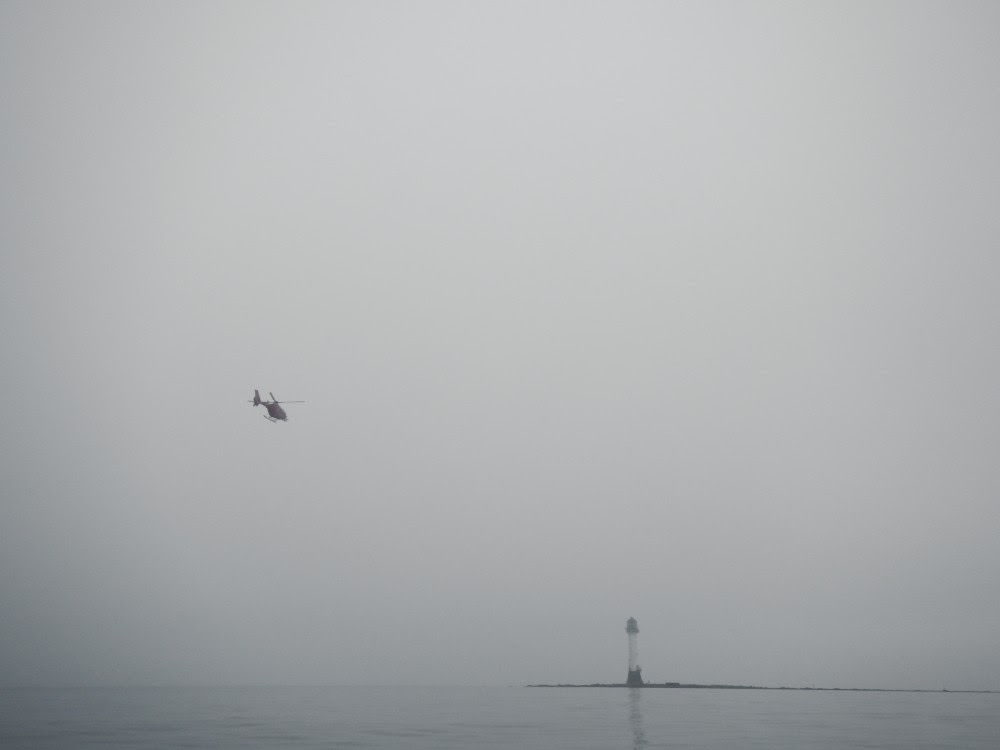 We reached the Bell rock after 3 h and 5 min and the water was still flats. There were many seals for which the Bell rock is an ideal habitat. 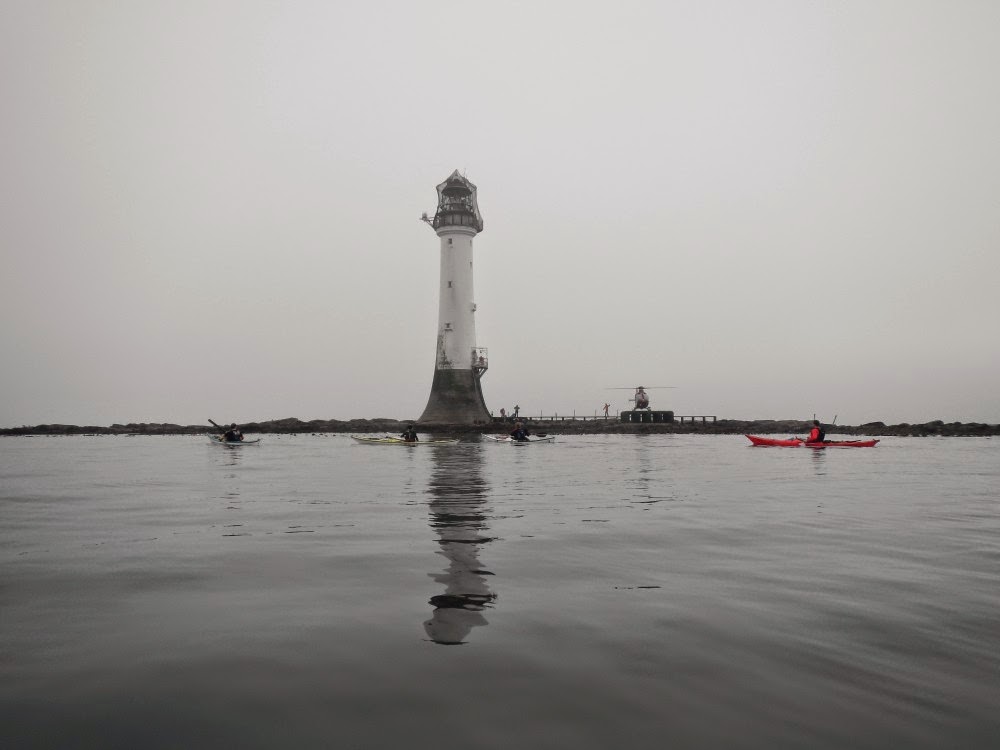 Here are two of them. 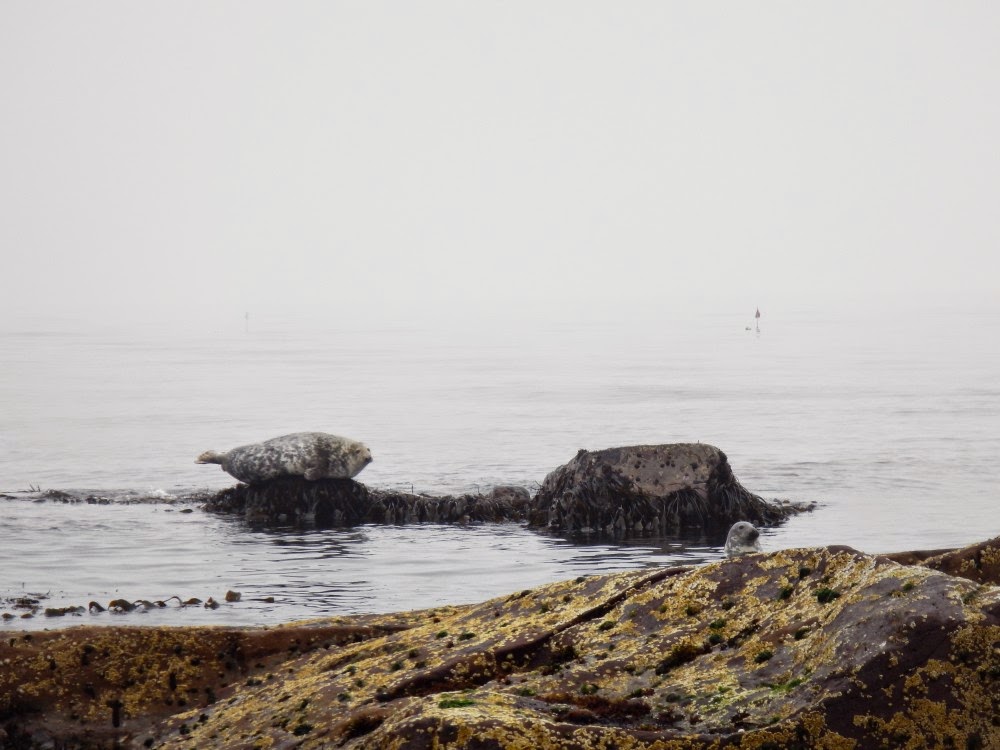 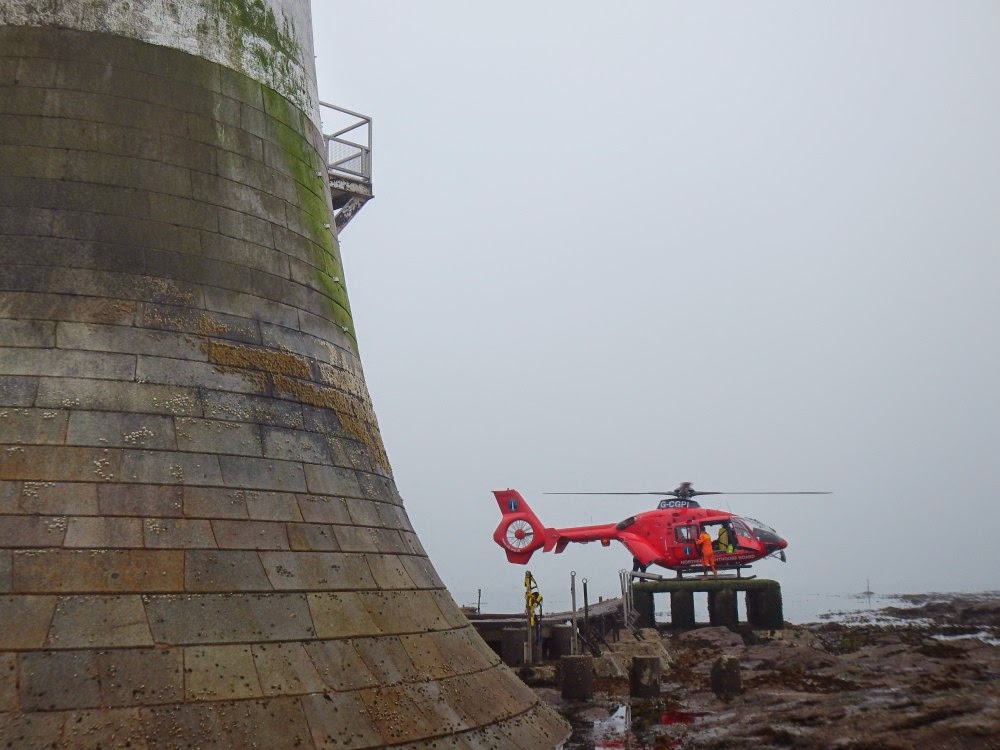 On the way back the sun came out at times. 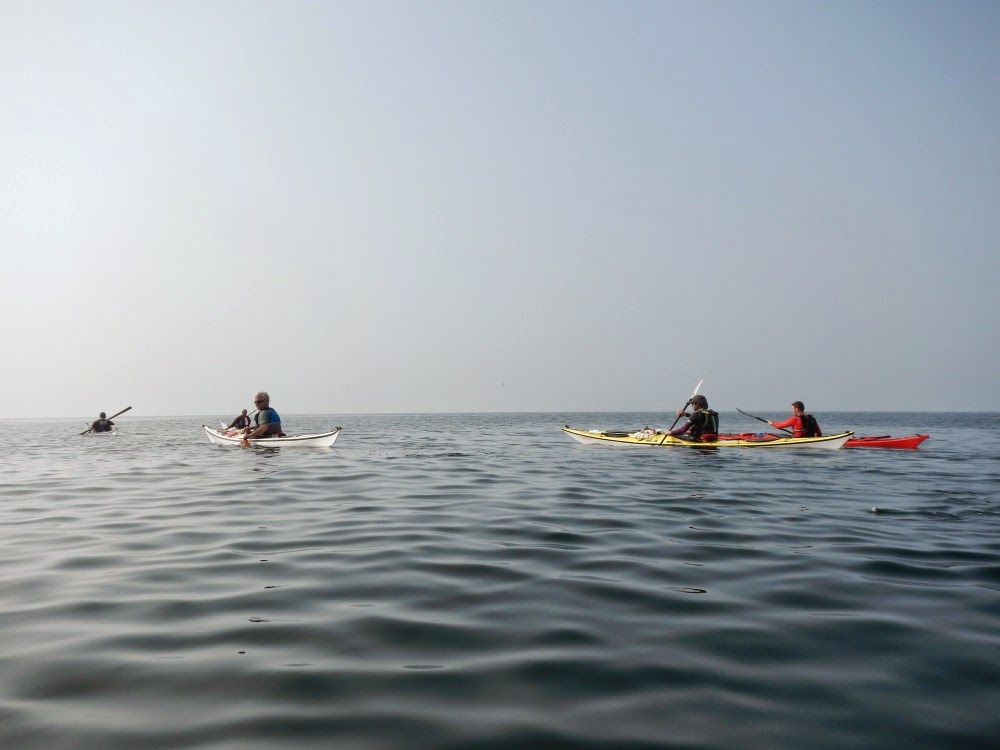 Here is Ian, far away from land but in the sun. 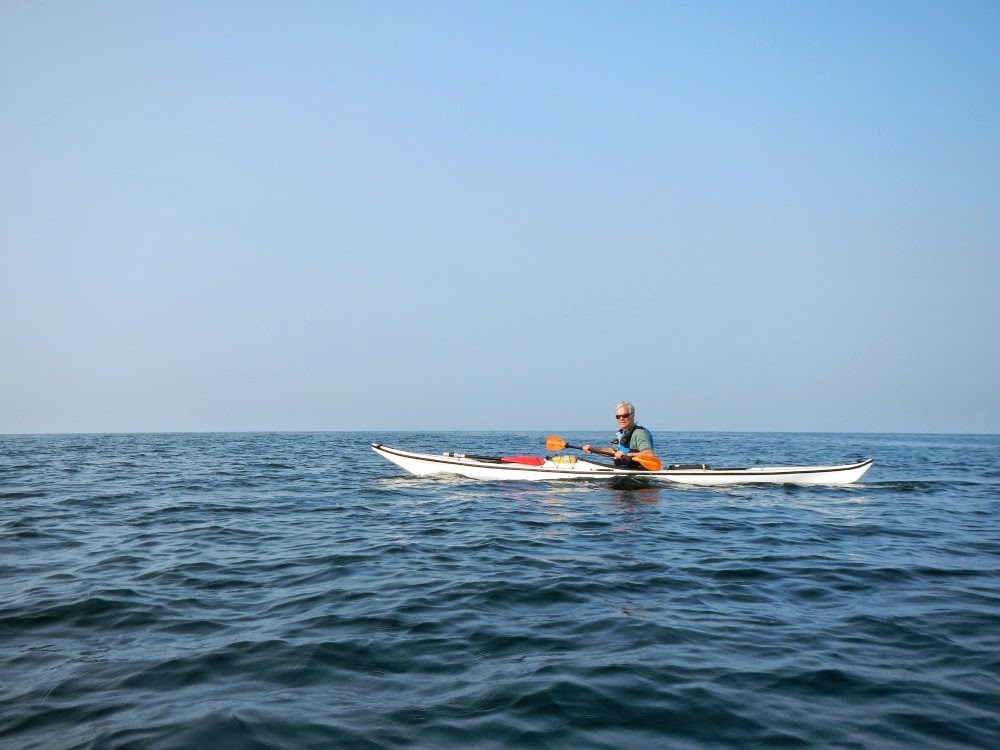 Later it became windier, the fog returned and it was difficult to follow a bearing due to waves that came nearly at a 90 degree angle. Here is our return route. We saw land about 3 km North of Kingsbarns.

Here we arrive. We had paddled over 46 km. 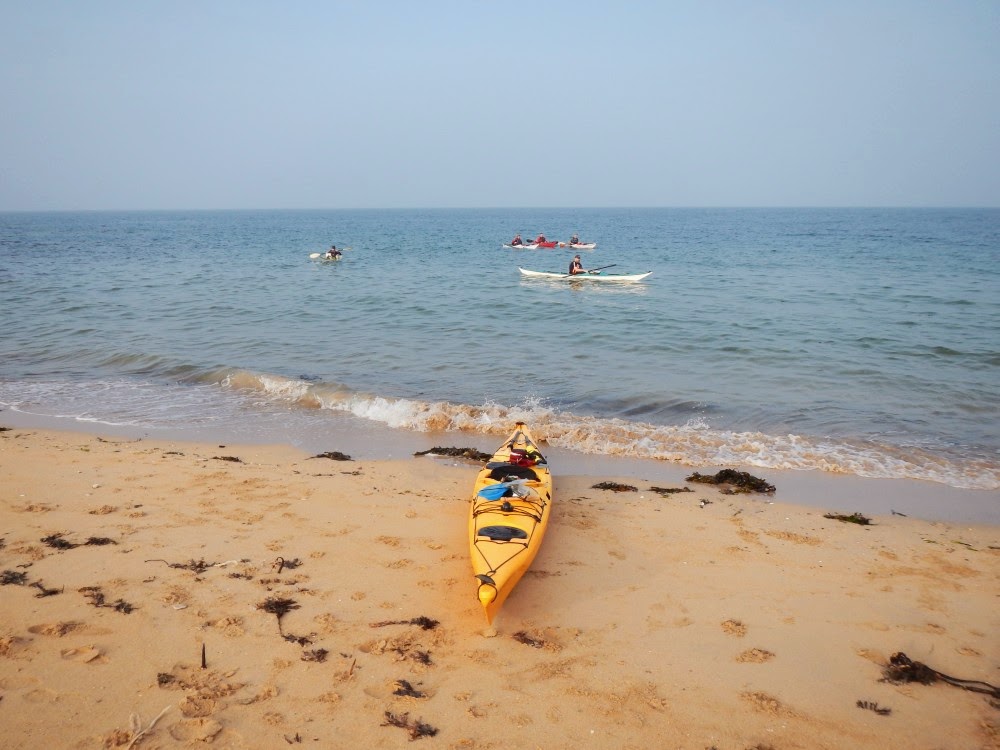 Finally another blog entry after a summer with much sea kayaking, hill running, cycling but less climbing. During the 19-20th of July Karin organised a trip to Skye, paddling to the Black Cuillin on the first day and then around Soay, a small island to the South of Skye, on the second day. The starting point is this stunning beach in Elgol. 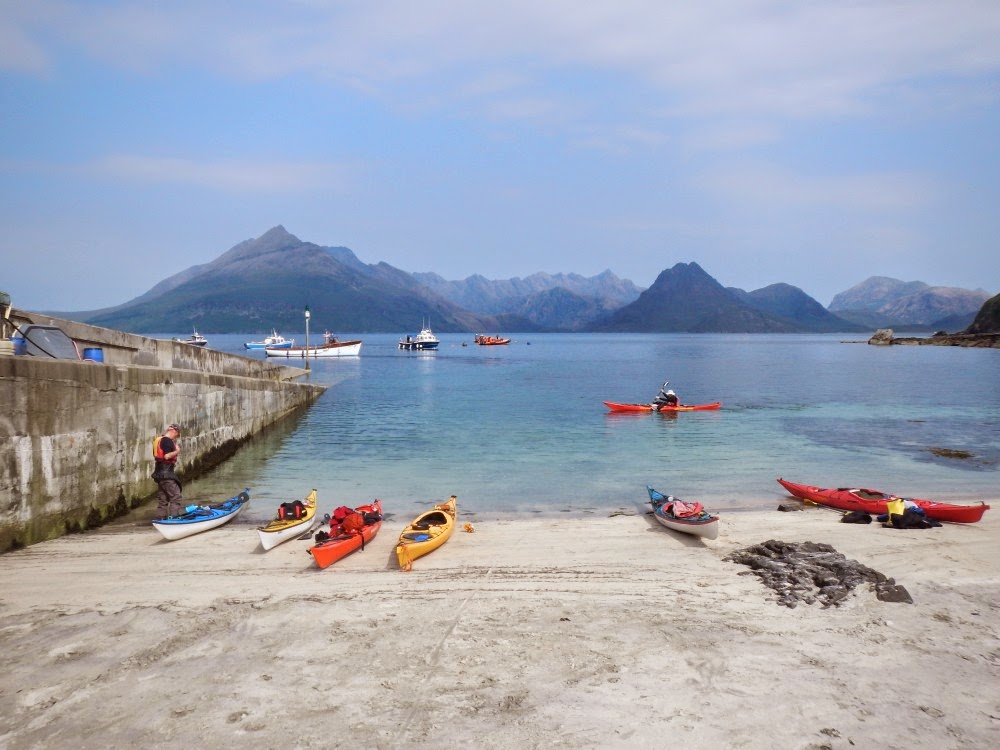 I had brought my fishing gear and BBQ as we were grilling in the evening. Soon I had two mackerel and a large pollack. Here are Karin and Gordon on their way... 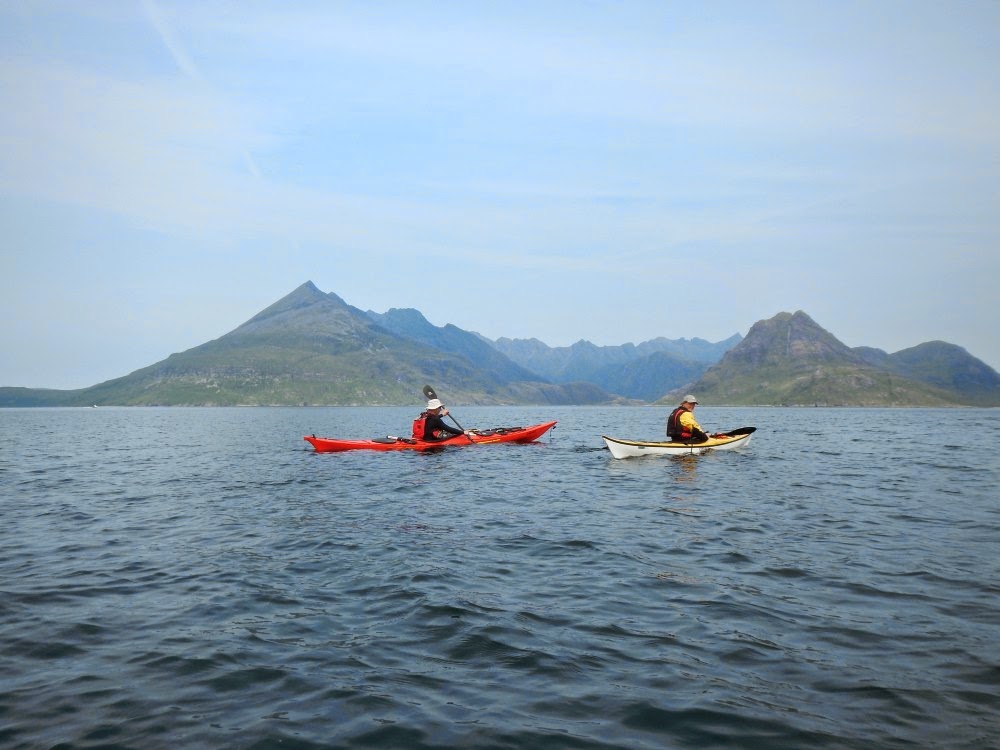 We transported our kayaks to paddle in Loch Coruisk, a loch which I had seen several years earlier whilst doing the Black Cuillin traverse. 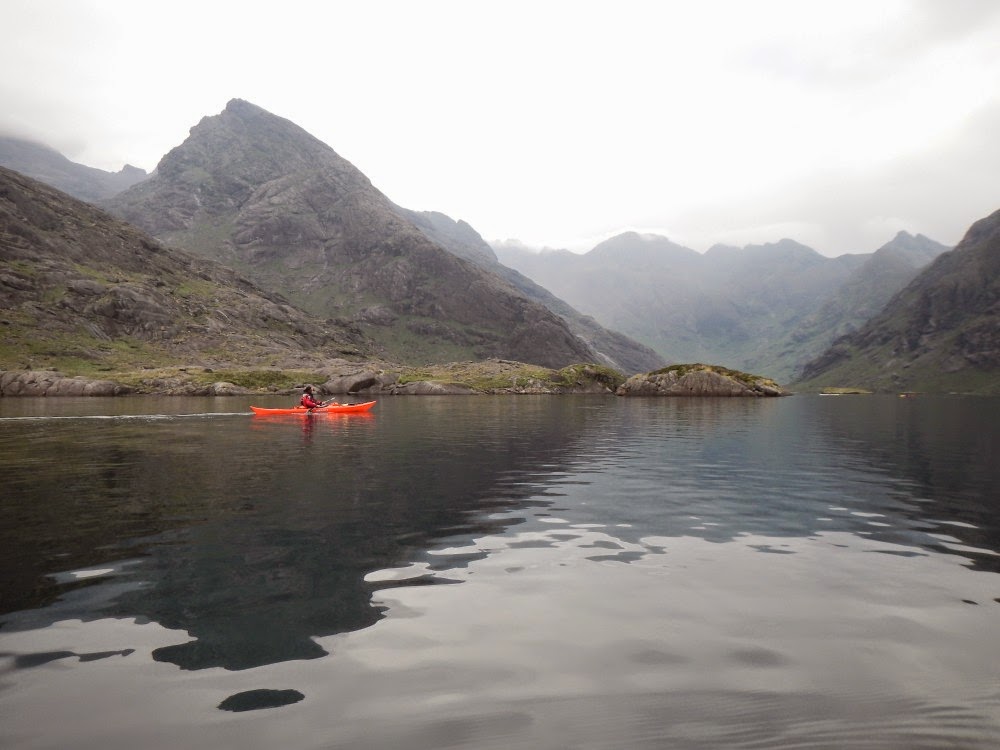 On our return the tide was out and so we had to do a sliding return into the water. 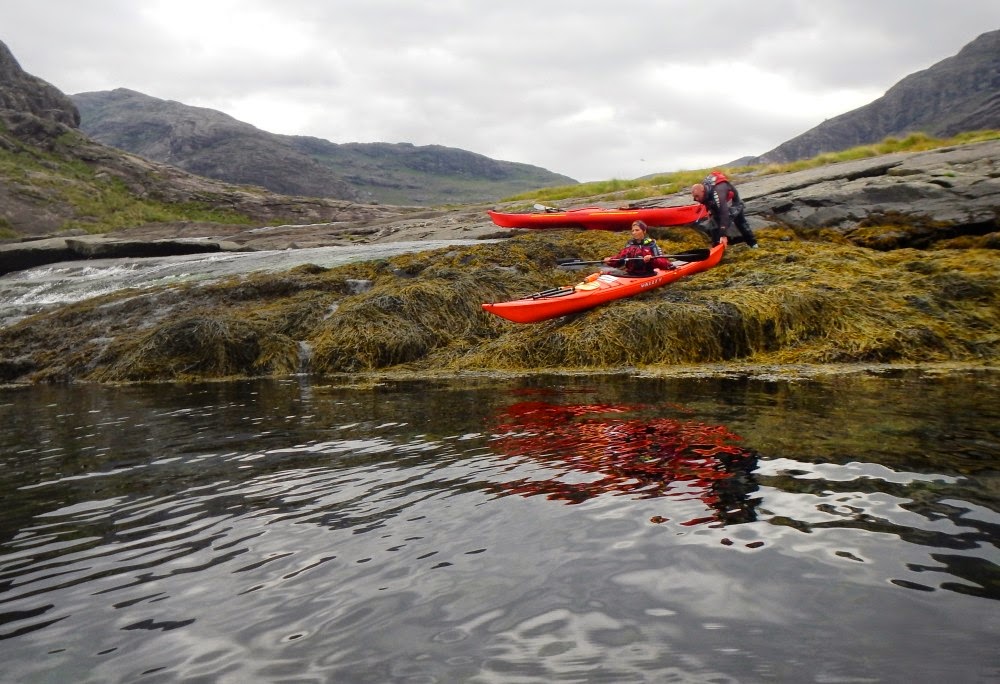 The evening was wet but I BBQ'd the mackerel and pollack together with lemon, salt & garlic. A very hungry school party ate the rest in no time. The next morning we paddled over to Soay and around it... 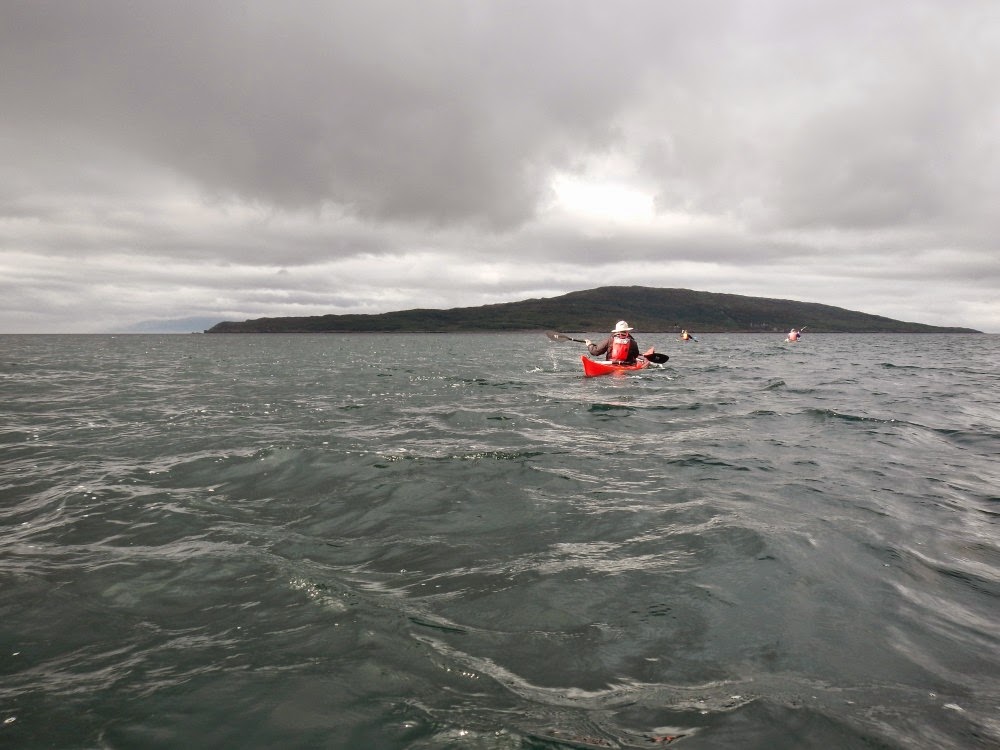 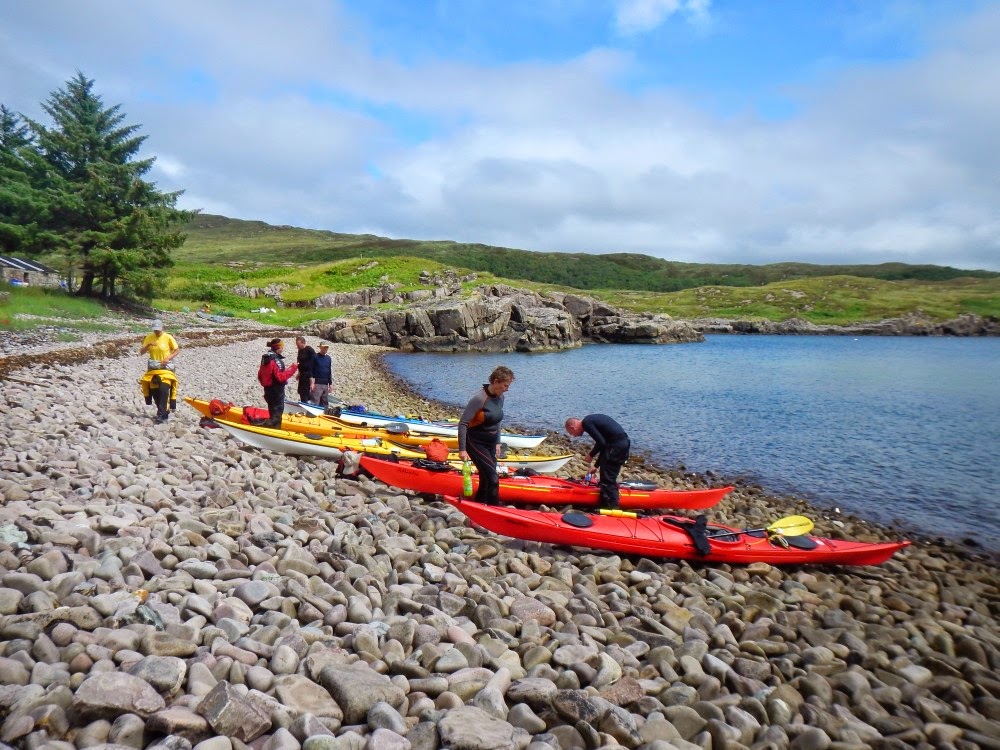 A week or two later we had planned an easy paddle on the Tay but the dolphins were out. So we tried to get close. 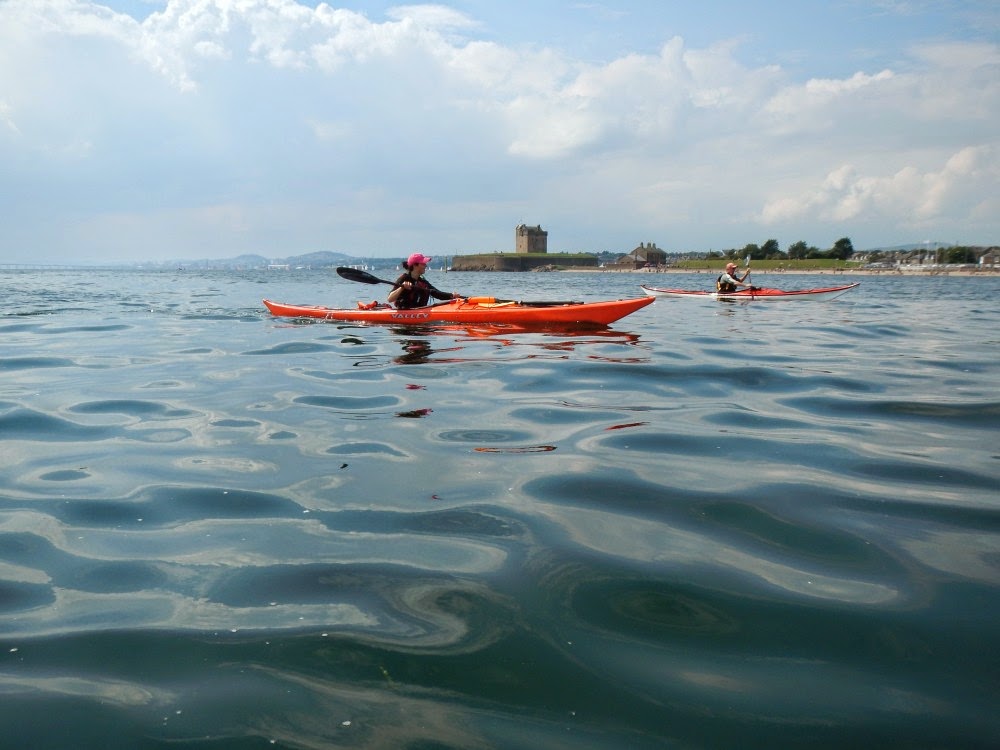 Here is one of them, less than a kilometre away from our front door in Broughty Ferry. 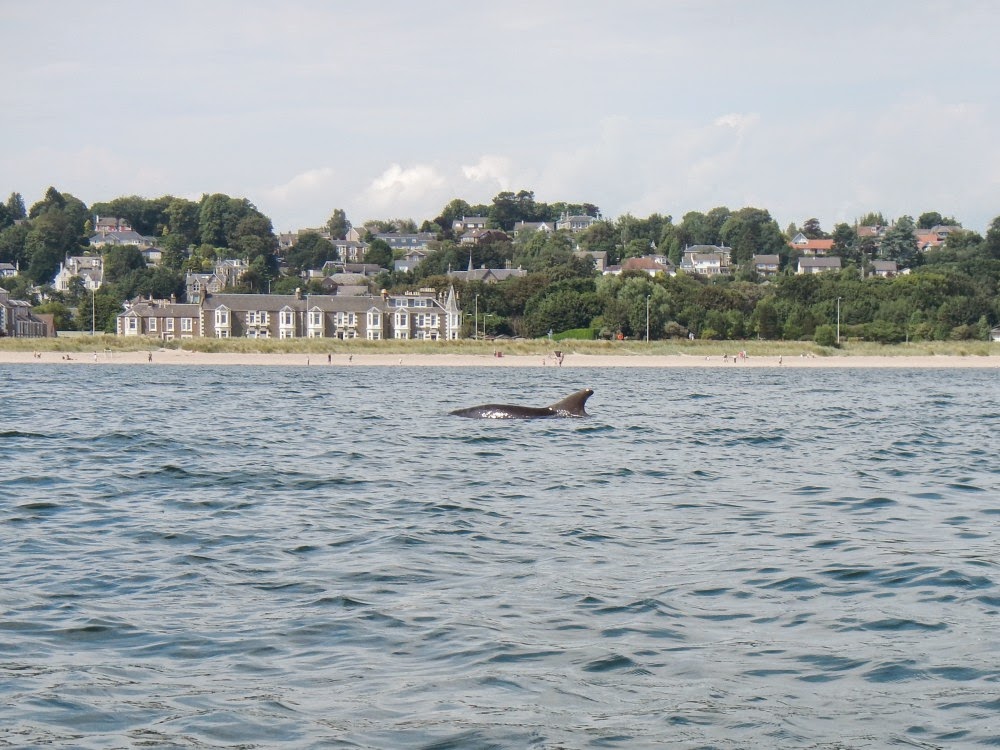 In August Paul and I went to Arbroath for a kayak fishing trip. Paul had also bought a creel in order to catch some lobster. We managed to launch and position the creel without any incident although it was a bit of a precarious affair. 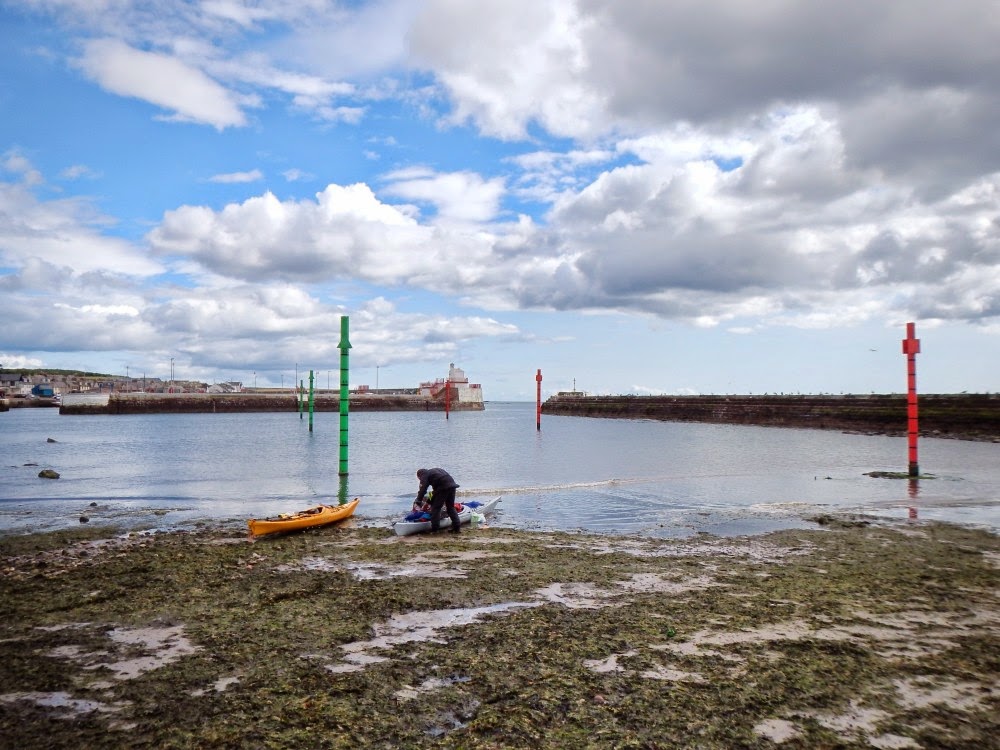 Clouds came and went but we only had a few drops of rain. Here is Paul paddling near Auchmithie... 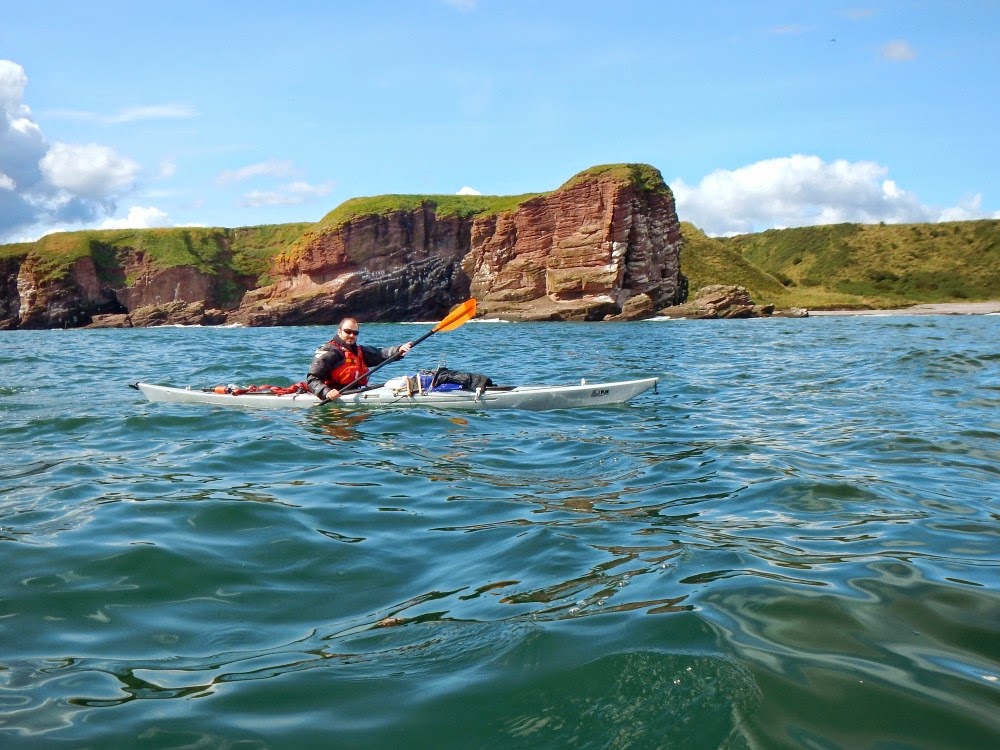 ... and here we are leaving Auchmithie bay. We soon caught a few mackerel for dinner. 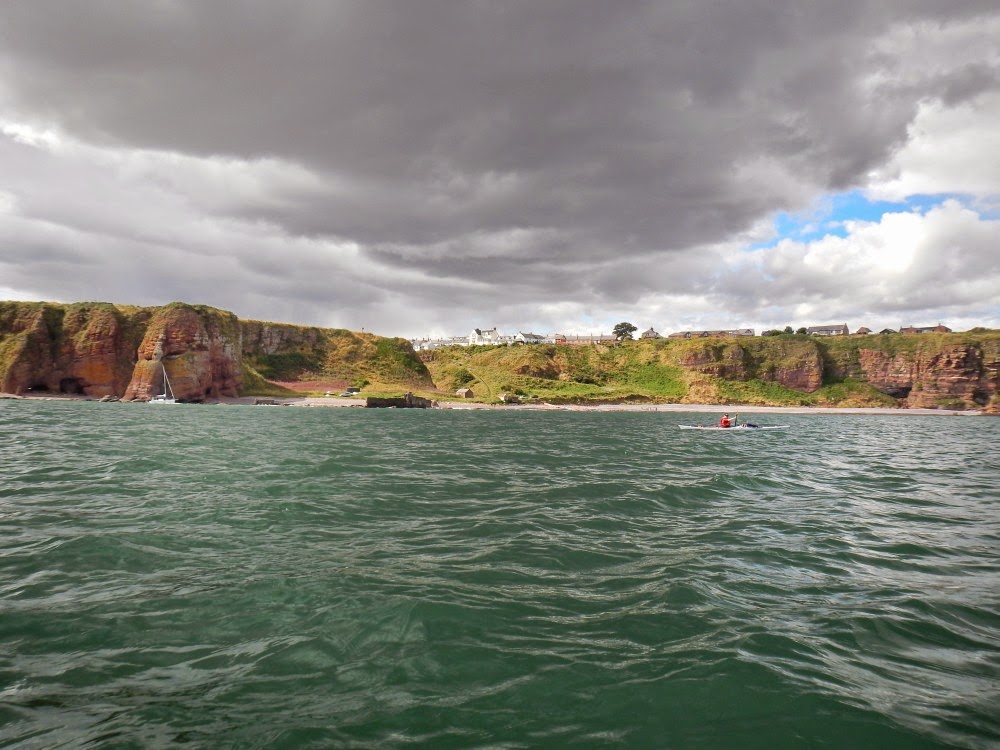 On our way back we collected the creel and despite 0.5% expectation there was a lobster in there. Here is Paul paddling home with his prey. 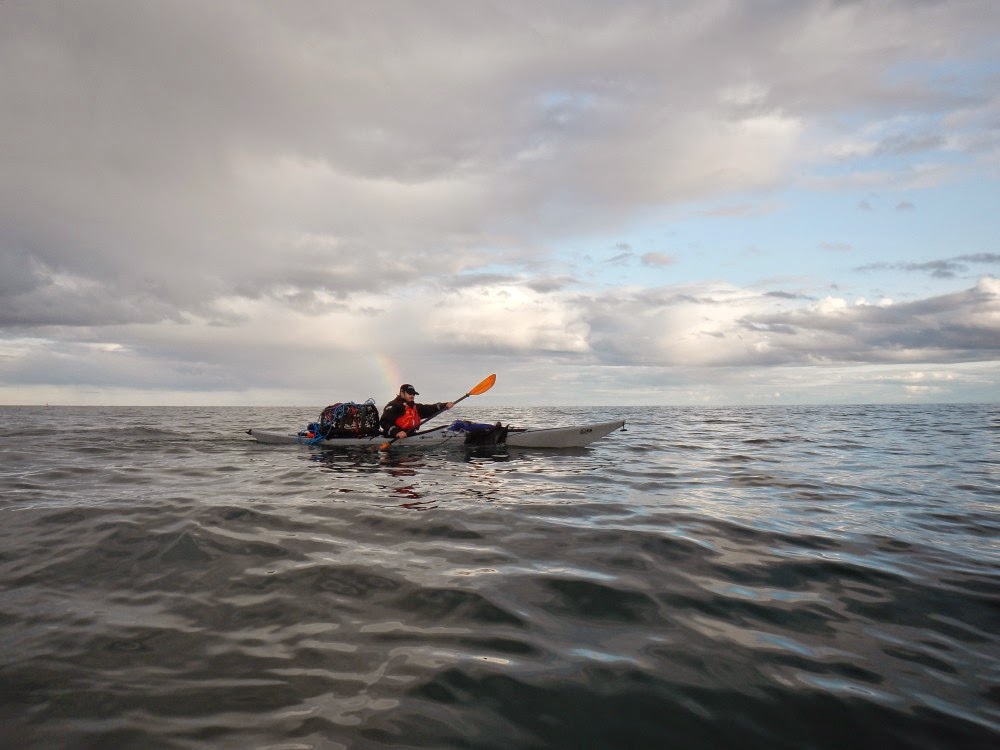 What a great country to live in for active people. I hope we chose the right future for this great nation in a few days time...
HW
Posted by Ryan & Henning at 11:20 No comments: