Once in a blue moon

Here it is: the ´Once in a blue moon´ buttress taken with a long exposure. 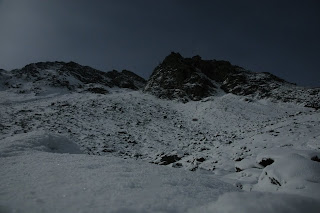 An esoteric, eight pitch gem requiring a long drive and walk in. [Well, that was a bit of a smokescreen because the climb is actually in Glen Esk] Here is the first pitch, a turfy, vegetated ramp. 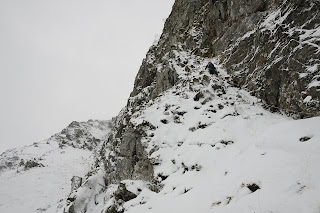 The second pitch leads up to a corner with a smooth slab on the right and a difficult top out on dry turf under powder. But bashing the vegetation means that after a while it turns into gardener's questiontime! 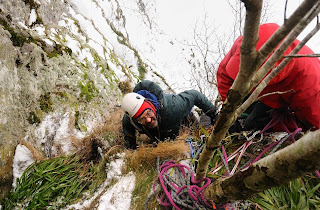 The third pitch was my turn. A short traverse into an exposed, steep, shallow chimney. The rock was friable and it took ages to place two cams to protect the traverse and to get established in the chimney. At this stage I let my axes dangle on the spring leashes and climbed the steep bit with hands and crampons. A good hold turned out to be a loose block but it was past the point of return and I tried to focus on the job in hand rather than to worry about breaking holds and airmiles. The pump increased but holds just large enough to hang on and just solid enough not to fall out. Finally I got my axes into good turf onto an easier angled slope. Pitch four was a tricky traverse and a short and sharp step up a steep wall and then snowed up heather to a tree belay. Here is the steep, short wall. 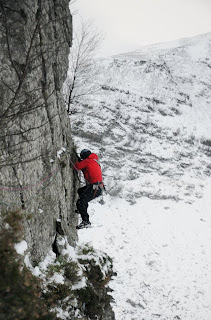 Pitch five was a deceptively hard slab. After trying a thin hook I bashed my axe into a tuft of turf on the righ, hooked an arrete with the left axe and bridged over to a small foothold. Still laybacking I found a small hook on the arete that allowed to step up and to find better turf placements to finish the problem. Nice, technical climbing and good to learn from the pros. Here is the belay below the slab which we climbed with headtorches. 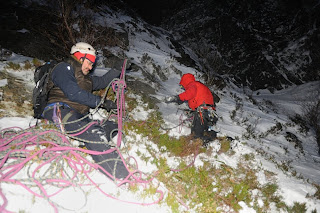 The last three pitches were easier climbing under deep powder to the top. We topped out under a blue moon, a 13th full moon in the year. Very grateful for being given the opportunity to be part of this adventure but I am ready for a Lanzarotean deck chair now!
HW
Posted by Ryan & Henning at 16:47 3 comments:

No Blue Skies rematch (sort of)

The morning started with a lot of snow in Aberdeen and Mark and I would not have started if the Scottish road webcams did not show free roads after Aberdeen. We found a very wintry Loch Morlich ... 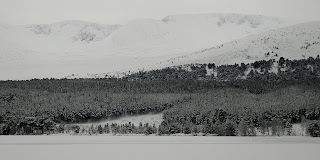 ... and Sneachda was a winter wonderland. Here climbers on Jacobs ladder and the slant. 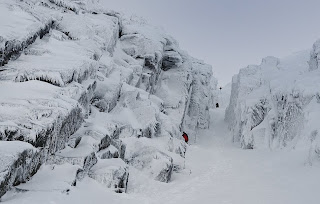 No wind but it was cold. We decided to try a rematch on 'No Blue Skies' VI,7 because Brian and I had to walk off after pitch 2 earlier in the year due to darkness. Today the cliff was buried under sometimes good but mostly cruddy neve and ice. It was time consuming to find any protection and the climbing was sometimes bold and often very delicate. Here is Mark on pitch 2... 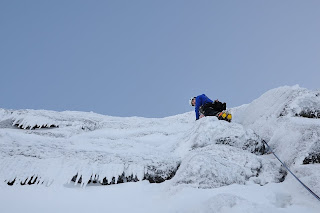 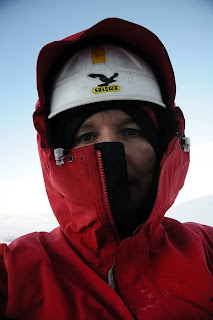 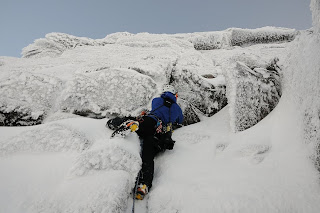 The crux move was on a flake and all the good hooks were covered by ice blobs or cruddy neve. Nothing to do a slightly overhanging move. Mark gave up after 30 min and I had a go. After a bit more gardening I found a very good hook but only for one axe and it was unclear whether the neve above would hold the cruxial second pull to get established on the upper slabs. It was 15.45 h and the climbers next to us had just finished The Melting Pot V,7. I decided to ask for a top rope (abuse now please!), did the move and found that the neve above was actually decent. Mark seconded quickly and when he arrived at the top it was already dusk.
Finlay and his mate climbed The Melting Pot and found the going tough as well. Here is them on the first pitch... 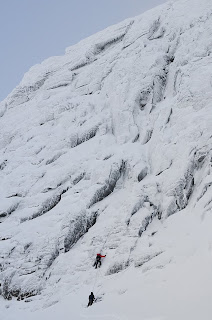 ... and here is Finlay doing the crux move through the notch in the overhang. A great effort. 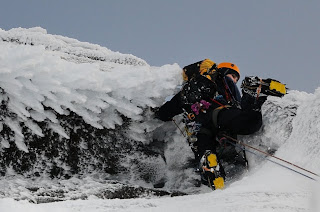 Conclusion: tough conditions, slow going. It should be considerably easier with either better neve or with much less of it. But the day was excellent even if the rematch wasn't perfect!
HW
Posted by Ryan & Henning at 14:30 2 comments:

Yesterday my climbing partner had to pull out and I just went to the Dubh Loch for a look. The roads were fine; less snow than reported elsewhere. First, a photo of a tame local deer. 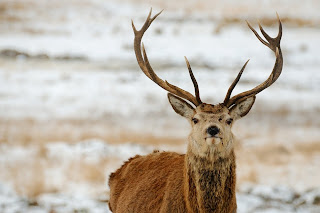 The Dubh loch cliff didn't look very white and should be better for mixed than for ice. 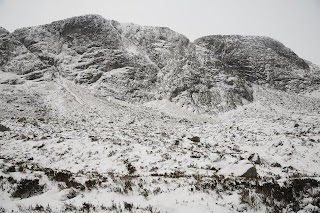 I walked up central gully to have a look at Vertigo wall. There seems to be enough ice on the third pitch and there is a line to it as well. Not sure about what follows after that. It should be climable on turf and ice but is by no means plastered. 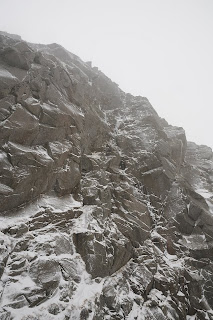 Labyrinth wasn't formed and Yeti and hanging garden did not really look in. However, Bower buttress on the left seemed OK. 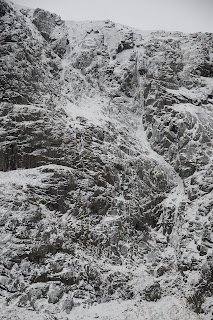 To the left of central gully there is an iceline (Minotaur?) which looked quite good. 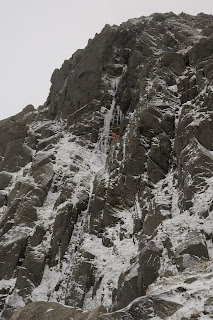 On the way back I passed funeral falls which is well formed and should be excellent ice practice. 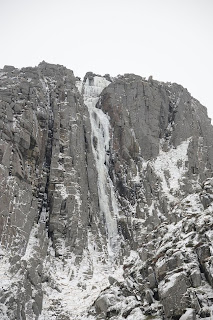 The last time I visited the Ben for a winter route was in 2007 when the ice was thick, the sun was shining and hard, scary routes became easy. After a couple of good Patey routes I thought that Ben Nevis mixed would be a good idea and the recent Crocket & Richardson Nevis book put plenty of oil into the flames. So James and I decided to give it a bash on Thursday. The idea of maybe trying the stunning Darth Vadar as a first VII,7 was quickly abandoned when we saw the dark, steep creature. Also the cold, wind and iced up cracks made Darth say 'come, try me for a wee epic' in-between the deep pneumonic breaths.

So we went for Gargoyle wall VI,6*** as an alternative. Here is James approaching the cliffs. Darth Vadar is the off with on the right of number 3 gully and the gargoyle of Gargoyle wall is potruding on the left wall. 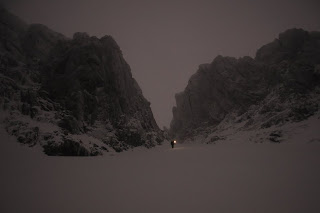 Here is another photo of Gargoyle wall coming down number 3 gully after the climb. The wide crack at the top belongs to Babylon VII,8. 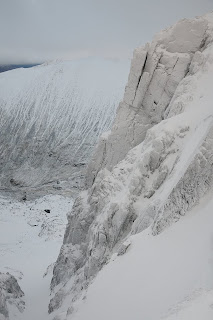 I started pitch one and found it awkward, being more used to Cairngorms granite than to the iced up rock on the Ben. A step to a large ledge proved to be difficult as I did not yet trust the Nevis snow ice and the dodgy gear. At one stage I considered jumping in the style of Sylvester Stallone but then cut a step and went across. In contrast, James, who is more used to Nevis ice cruised it and then climbed the second pitch while I did the third one. Here is James following with big exposure. 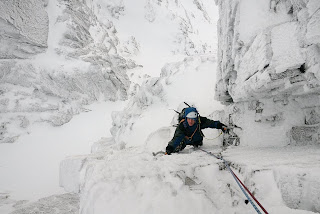 The fourth pitch is the definate crux. All the holds and gear slots were covered with ice and James did a fantastic job staying on, getting some mostly dodgy gear in. It was a serious, thin lead and I struggled even to second the pitch because it is steep, there are few positive hooks never mind torques. The guidebook said it is 'memorable'. Here is James while I was standing below right in the line of fire. Needless to say, I was grateful that he didn't come off. 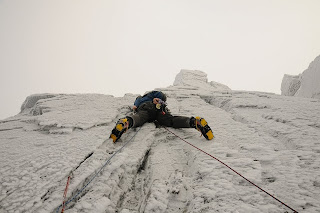 The fifth pitch was a groove with good neve but hardly any gear. I got a bit used to the Nevis neve at that stage and climbed better than at the beginning. Here is me starting the groove on a photo taken by James Richardson before his camera gave up! 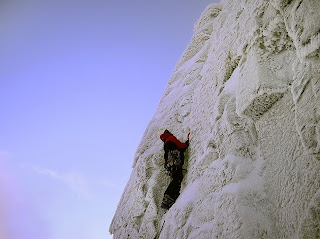 Finally after an airy traverse on steep neve I ended up on the easy finishing ramp of number 3 buttress. A long way down followed. We saw still two parties in Green gully and the second must have become benighted. But a gully is better than a face route after dark. 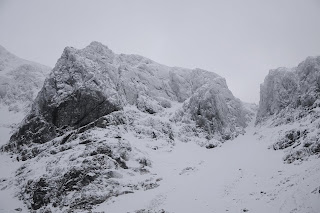 Conclusions? Definately not used to iced/hoared up Ben Nevis mixed. It is scary and I prefer the granite of Carn Etchachan or Beinn a Bhuird which is more positive. But the Ben is the real thing...
HW
Posted by Ryan & Henning at 14:55 2 comments: