The Met Office Eastern Highlands forecast had suggested a 300 m freezing level and a lot of snow. Thus on Sunday Robbie and I went back into Corrie Fee in order to climb the face to the right of Look C gully as directly as possible, especially above the band of overhangs. However, when we arrived there was less snow than we had hoped for on the lower buttress and so we decided to follow a neve and ice line to the right of 'Frozen Forest' as it looked best. For the guidebook we suggest to record the left, harder line as 'Clova Direct' V,6 as shown in red on the topo and the left, easier line as 'Frozen Forest' III,4 which is shown in yellow on the topo. These are the most logical lines and they are most consistent in difficulty. 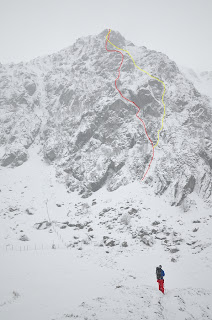 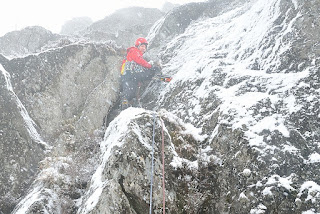 The lower part of the upper buttress ends on a saddle that soon leads to the upper part of the buttress. Here, Robbie led a very well protected left-facing open book corner followed by a steep crack... 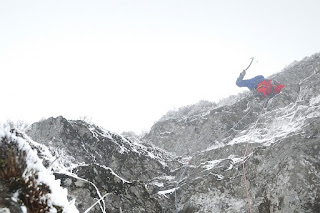 Robbie then carried on straight over a tricky tech 6 overhang with good protection and perfect hooks and, seeking more difficulty, climbed a thrutchy 10 m offwidth crack to the top. We then awarded ourselves with a bum glissade down D gully. 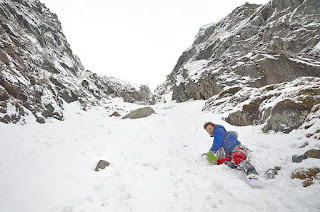 As we say, the revised 'Clova direct' (the bottom of the original Frozen Forest which we had climbed earlier and the top of Sundays route) gives an atmospheric, generally well protected route up a 250 m high face with two tech 4, one tech 5 and one tech 6 pitch although the tech 6 difficulties at the end can be avoided. The revised III,4 route, 'Frozen Forest' is an adventurous turfy route with one ice fall and an atmospheric gully on the upper buttress to reach a ramp on the highest buttress and then turfy ground to the top. Both routes are good alternatives when Look C gully is not in condition as Look C needs a prolonged spell of cold weather to freeze the running water whereas on this face the turf needs to be frozen and it needs to be snowed up. Currently there is a lot of good neve in Glen Clova so it is well worth a visit after an overnight freeze.
HW
Posted by Ryan & Henning at 11:33 1 comment:

A very cold day was forecast and so we went the second time into Corrie of Farchal which has much more to offer than is obvious from the road. We planned to add another line to the buttress which we had climbed on new years day. Here we approach the buttress... 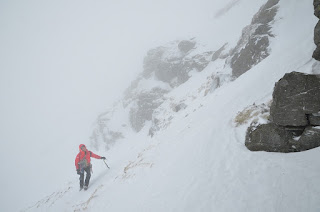 ... which was in good condition with snow, solid neve, well frozen turf and even some ice on the rock. 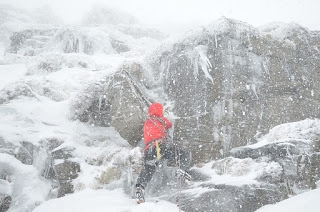 It was cold and snowy which was a relief after the hot air weather system which had recently passed over the Scottish winter climbing lands. 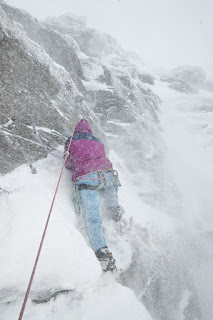 In Corrie of Farchal the rock is frequently broken which means mostly good protection and some thrutchy chimney climbing. Here Tim is on our second climb, a broken buttress on the right. It was better than it looked from below but overall easy. 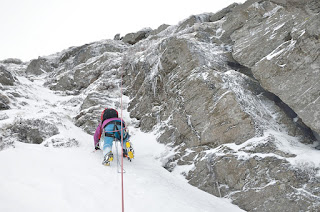 A last dash to the plateau and some blue skies. 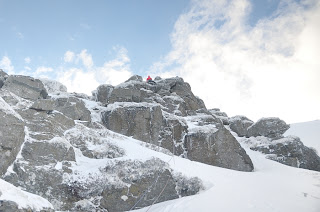 A good day and we did not see a single soul on the hill despite the excellent neve and ice conditions. 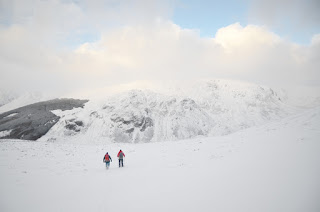 Corrie of Farchal is well worth a visit for grade III/IV climbers who do not like long walk ins.
HW
Posted by Ryan & Henning at 17:21 No comments: