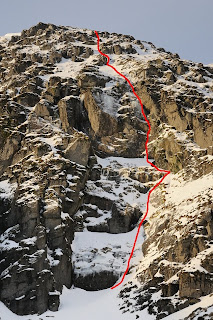 This climb is all about the second pitch.
Pitch 1. 45m. Climb the right side of the recess in-between the 'Sun Rock Blues' and 'Wiggle' buttresses to a good rock belay.
Pitch 2. 50 m. Climb left and then directly up the steep wall to the icefall above. Climb the icefall in an exposed position to reach easier ground. A stunning pitch.
Pitch 3. 50 m. Easy climbing to the top remains.

When we climbed Sun Rock Blues two weeks ago we noted that there was no climb in the recess to the right. We discussed trying it at the weekend but the forecast suggested snow and a strong NW wind which meant avalanche danger. Adam, Robbie and I went nonetheless, ready to change plan if required. We were rewarded with an icy Clova and no avalanche danger as it hadn't snowed. Here is Adam walking towards the rising sun... 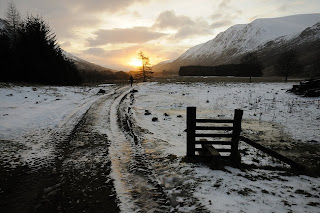 ... and here is Robbie at the bottom belay. A lot of snow had thawed but with two and a half days of sub zero temperatures icicles and ice were everywhere, the neve was decent, the turf perfect and high on our route was an icefall. 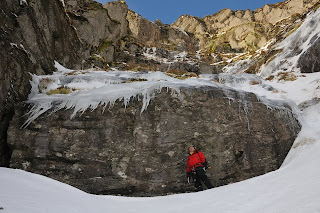 Here the first pitch looking up with Robbie taking the photos... 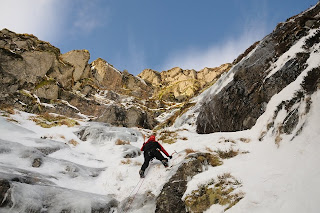 ... and here looking down the first pitch with Adam climbing. 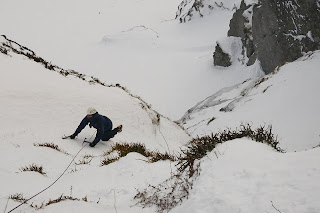 Here a wee rest before pitch 2. 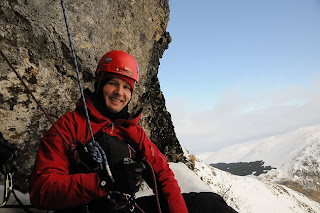 Pitch 2 is the crux pitch. Left on neve and then all of a sudden the wall to the icefall. It was steep from the word 'go', bomber placements on turf and ice, torques in icy cracks and steep moves with often little for the feet. Neve on the mini ledges which had to be partially cleared to get a bomber placement in the turf below. A nut here, a peg, hex, warthog, sling around a wee flake, all in strenous positions. Technical mixed climbing and just enough gear to keep going. Then in an exposed position 10 m of tech 4/5 water ice to reach the easy climbing, a decent hex and a photo of the climb below. Spot Adam and Robbie belaying. It was as steep as it looks. A stunning pitch. 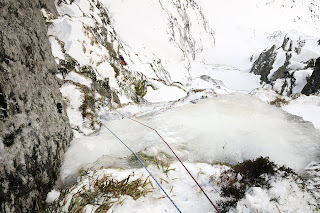 I found a half decent belay and now that the tension was gone I became careless and sent my Nikon D300 all the way down the hill. It is not a nice view to see an expensive SLR in an Ortlieb bag first slowy and then quicker and quicker racing down a neve slope to disappear at high speed.
Adam and Robbie battled up the pitch and at the top we agreed that this was a sizeable step up from the tech 6s we had climbed. The last pitch was grade 1 and when arriving at the floor of the corrie Adam found my camera which, despite a long fall, still worked as if nothing had happened. Buy Nikon! 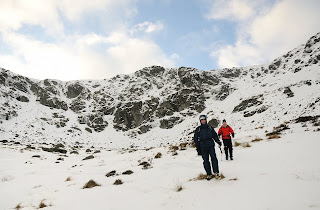 We met in the Clova Hotel which is recommended http://www.clova.com/ and started to think about names. 'The Clova mix', 'Clova mixer', 'Clova trauma' and 'Clova allsorts' were mentioned but did not made it into the final round. 'Nikon killer' seemed good but as I hadn't managed to actually kill it we decided on 'Moon Ice Jazz' as 'Sun Rock Blues' was the line next to it. We were sure about tech 7 but unsure whether a route with one money pitch deserved an overall grade of VI. However, pitch 2 is sustained and strenuous and the gear is sometimes hard won and it felt harder than Stirling bomber. Adam also thought that grade VI would be a 'health warning' so we settled for that. Stars? If there were three pitches similar to the second then it would be an oustanding route. But there weren't. So no, one or two stars? We thought it was worth two because pitch 2 is inescapable once committed and the climbing and the positions are excellent especially with the 10 m icefall, a truly mixed pitch, not just snowed up rock. Hopefully it'll get another ascent and then we'll know whether it is overgraded, overstarred and overhyped.
HW
Posted by Ryan & Henning at 13:52 2 comments:

To be honest, it could have been an off day: The freezing level was reported to be at 700 m rising to 1200 m, precipitation and a southwesterly wind were forecast and so I warned Adam Henly, Arno Alpi and Tim Chappel that we may end up doing a walk. Also I suggested to go to Glen Clova to avoid a long drive for little or no climbing. In the glen winter corrie, which can be seen from the road, looked very good and it still looked very good higher up. 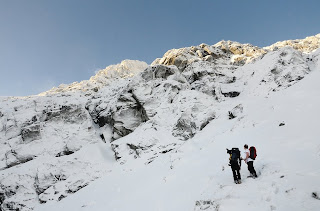 Arno and Tim enjoyed the day doing some gullies (photo by Arno)... 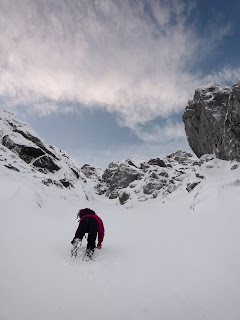 ...whereas Adam and I opted for a buttress route. We decided to do Sun Rock Blues IV,5 instead of Wild Cat Wall where Brian Duthie and Sandy Sampson had added a tech 7 direct variant last year. We decided against Wild Cat Wall because the headwall caught the sun and we were worried about icefall. Here is Adam approaching the wee buttress of Sun Rock Blues (left and above of him). 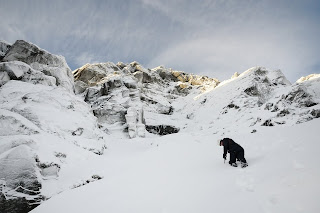 We did a more direct version of Sun Rock Blues at probably IV,6 which is shown in red whereas the original route is shown in blue. 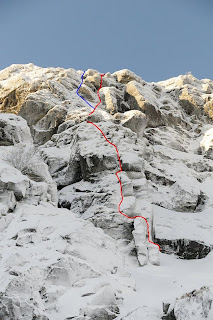 The corner system at the start was was steeper than it seemed at first glance. Here is a photo of the start taken by Adam. Note the sling around the root... 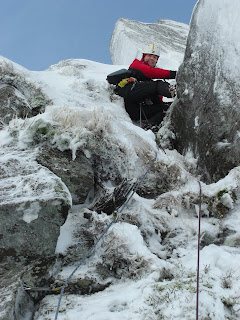 The right hand side of the buttress led to a desperate overhang with little for feet and axes and I thought that this was way too tricky for tech 5. Here I am reversing the climb up to the overhang. The photo was taken by Arno... 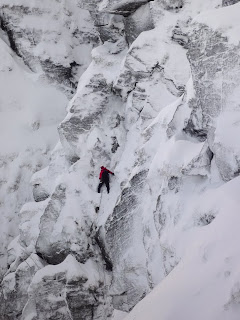 ... this photo, again taken by Arno, shows the position of the climb dwarfing me whilst switching to plan B. 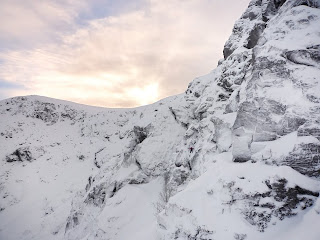 A traverse to the left allowed to climb a less difficult line to a belay below a blocky chimney. Due to taking the wrong way and due to the large amount of snow the whole pitch took ages but Adam did well seconding. Pitch two started with a lovely, blocky, well protected chimney followed by a 20 m runout on steep turf before a good hex runner belay. Adam took a photo of me in the blocky chimney... 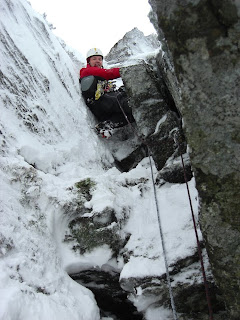 ... Arno took one of Adam belaying at the bottom of the chimney and me climbing the turf above... 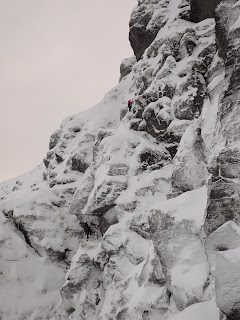 ... and I took one of Adam while he was approaching the belay. 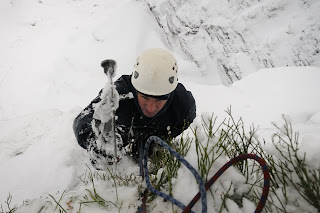 The third pitch of the original route traverses left and then up to avoid the steep ground above but we didn't bother to read the guidebook as we remembered that the tricky climbing was supposed to end on pitch 3. So I took a steep, turfy ramp more on the right using a sling around a couple of icicles as the only piece of protection. A rock wall at the top blocked progress and the options were an exposed traverse to the right or an overhanging corner above and possibly something on the left. I got a good hex below the overhang and a good nut that would protect the inital moves. There were some small footholds on the prow on the left and the wall on the right and at the top there seemed decent turf so that the way through looked like wild but doable climbing. I started by laybacking off a hook in a crack and a turf placement to place one foot high and managed to get into a back and foot position before pulling over into a turfy groove and then towards easier ground above. An excellent pitch with an airy, exciting crux which is probably tech 6 straightening out the original climb and adding a crux. Probably a well over the top description but we enjoyed it! Adam did very well to climb this pitch. He then quickly led through to the plateau. 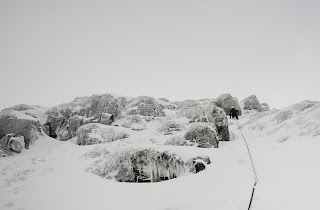 Unexpectedly a very good day for all of us even although the amount of snow made the climb both look pretty but slow to climb. It didn't snow over night and the existing snow was well bonded so that there was no avalanche danger (it would change quickly if it snows). The wee variation is worthwhile for those that have extra energy to spare. With cold nights the turf should probably stay frozen for quite a while because there is plenty of snow to insulate it.
HW
Posted by Ryan & Henning at 14:49 3 comments: