Glen Clova and the neighbouring Glen Prosen are the nearest winter climbing venues for Dundonians and also close to Aberdeen and Perth. In Glen Clova the two main crags are corrie Fee with the classic look C gully and winter corrie. However, when the recent Cairngorms guidebook came out I stumbled over the south facing North Craig where Greg Strange and Rob Archbold had put up a two pitch HVS summer climb named ‘High Plains Drifter’. This suggested that the crag must be steep and reasonably high. I think three years ago Ryan Slater went up in a thaw and fog to have a first look of the crag. Last year Robbie Miller, Andrew Melvin and I went up again in thaw conditions and saw surprising quantities of ice due to drainage from above but the ice was rotten as it was far too warm. Finally yesterday (17.12.2011) Arno Alpi and I decided to make an optimistic walk in as we had cold nights for a while and as the end of the week was frosty around the clock. 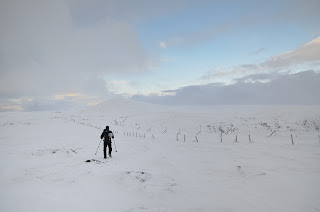 When we arrived we saw a lot of ice, we were out of the wind and the sun was shining! We did three routes and graded them according for ‘average’, less than ideal conditions. The routes are (see topo below):
1) White Plains Drifter IV,4* 45 m, red;
2) Whitewash IV,4 50 m, yellow;
3) White Sun of the Desert III,4 45 m, blue. 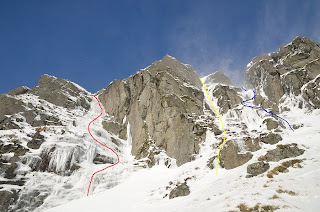 We encountered thin and hollow sounding ice making the climbing interesting at times but after a prolonged freeze on an icy day with sunshine most routes should be easily a grade easier, deserve more stars and the crag will be a mini Beinn Udlaidh (so we hope!). Presumably conditions will be good here if look C gully in Corrie Fee is in nick. We started with the most icy route. Unfortunately the ice was quite thin and hollow sounding especially the last 10 m at the top. Nonetheless, it is a rare privilege to climb ice in the sunshine in December in Scotland. Ask Pete Wisthal who experienced very different conditions on Lochnagar. Here is me near the top before the delicate stretch of ice. 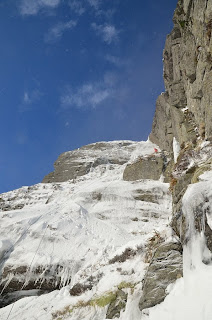 Next was the corner to the right. It looked good but in pieces the ice was poorly bonded and fell off making the climbing a bit too exciting. Again it will probably be a grade easier when in good nick. 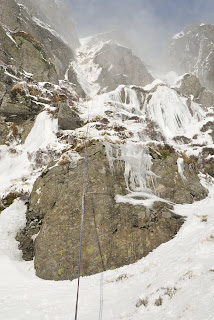 Arno then tried the final obvious gully line furthest to the right. 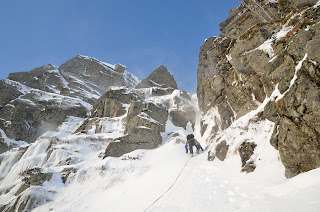 However the snowice on the steepest bit was hollow and so we decided entering the gully via the buttress on the left which is a grade III and will not change much with conditions. 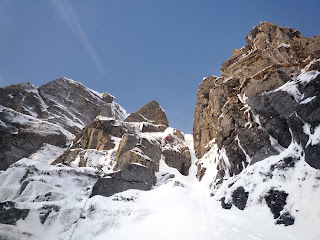 Good fun climbing and an excellent day. Here is Arno on the way back. 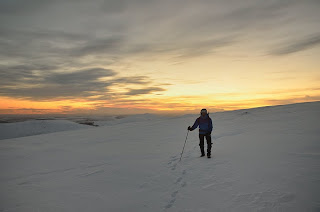 Some detail for North Craig which was first explored by Greg Strange and Rob Archbold.
1) Approach: Ascent the Kilbo path, walk for about 500 m towards the summit of Mayar and then contour to find the south-facing crag at ≈700 m altitude. It is not named but marked as one black line on the 1:50,000 Ordnance Survey map about ≈500 in south-westerly direction below the summit of Mayar. Alternatively use any route to the summit of Mayar and descent to the crag. The location is NO239 733.

Winter:
White plains drifter IV,4* 45 m. Climb the obvious, iciest corner. If the ice is thin or hollow the last 10 m can be precarious.

Whitewash IV,4 50 m To the right of ‘white plains drifter’ climb the obvious gully line with an ice step one third up. The route will probably be a grade easier if there is good neve.

White Sun of the Desert III,4 45 m On the first attempt the ice in the gully was fragile so the buttress to the left was climbed to gain the upper part of the gully via a few airy steps.
HW
Posted by Ryan & Henning at 09:56 3 comments:

No need to wait any longer: winter has finally arrived and Arno and I decided to combine plenty of hill fitness training with a short climb given the relatively poor forecast and the few hours of daylight. We decided on the Noe Buttress in Coire Chat (Ben Cruachan) which has only seen first ascents after 2000. We left Dundee at 6 am and here is Arno walking near the stream towards the Cruachan reservoir. 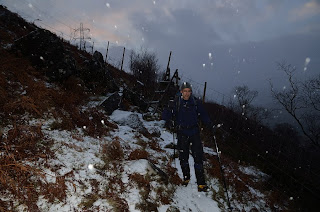 There was snow from 200 m upwards making the ascent to the 1126 m high summit of Ben Cruachan the hill fitness exercise that we were looking for. 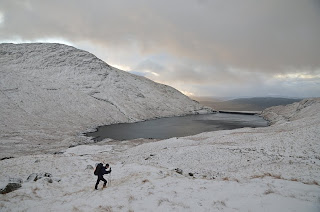 From the summit the buttress is visible. Descend from the summit and walk maybe for 200 m on the ridge that goes to the West until you find East gully. At the bottom there is a good spot to gear up. It was Baltic with a strong, icy Westerly but the Eastern side of the crag more or less sheltered from the wind. 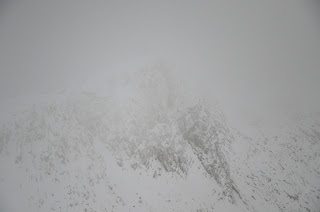 We decided to climb Tainted Elixir, a short, 70 m V,6*** first climbed by Chris Cartwright and Simon Richardson on the 14th of December 2003. The climbing was physical, technical and sustained and very similar to the best the Northern Corries have to offer. Gear was very good even despite the ice which required scraping and hammering. Here is Arno climbing. The steepness of the crag becomes apparent. 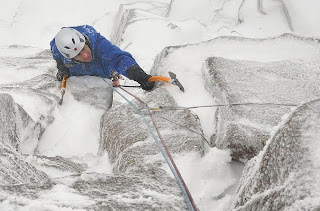 And here he is a bit higher. 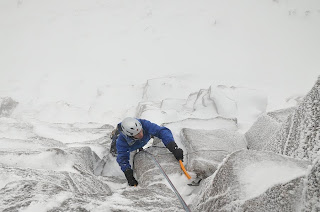 I climbed the first two pitches as one and belayed below an overhang. The overhang was climbed with interest as the guidebook says but actually it was easier than it looked with lots of gear and good hooks, very satisfactory. After that some easy climbing to the crest. Because the climbing is so good and sustained the end was disappointing and it would have been nice if there was another pitch. On the other hand there are good looking routes to the left and right and so keen folk can easily climb another route. Here is me on the descent happy about the first route of the season. 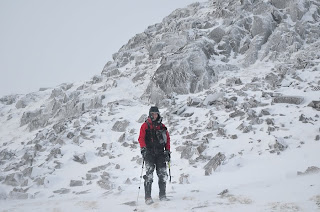 At the end a sunrise over St Cyrus nature reserve on my way to Aberdeen. Whenever I get fed up with the dark Scottish winter days like yesterday and vistas like this make me forget all that gloominess. 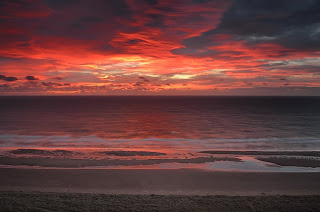