Two colds, plenty of work and weekend thaws had kept me out of action this winter so far. But when Guy Robertson and Greg Boswell climbed the Vapourizer VIII,8 (****?), the much sought after direct ice start to Vertigo Wall followed by a traverse into exposure heaven with a hard and airy finish out of the cul de sac where Andrew, Robbie and I had to return two years ago I was going cold turkey like Gene Hackman in French Connection 2.

The forecast did not look good with a freezing level of 1000 m but we decided to try Aonach Mor where both Robbie and I had never climbed. Aonach Mor was high enough for the forecast and also there is a mix of ice and mixed routes. Here is Robbie, with a Nisbetean winter climbing beard, waiting for the gondola. Definately not traditional (i.e. the gondola). 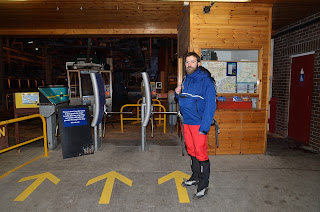 From the top of the gondola it was still a decent walk to the top where the ski guys were very helpful. We quickly found easy gully, kicked a snow bollard and abbed into our own world. We were the only ones. 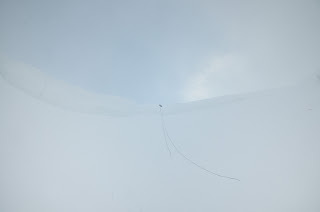 It was all white, icy and buried and so we decided on Grooved Arete V,6*** (ex IV,5) climbed first by Simon Richardson and Roger Everett in 1988. Here is Robbie walking past the twins area... 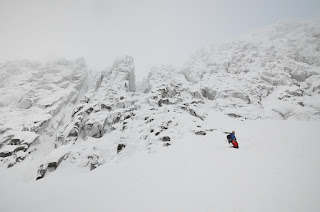 Here I am starting the climb. It starts not well defined but soon forms a distinct ridge. 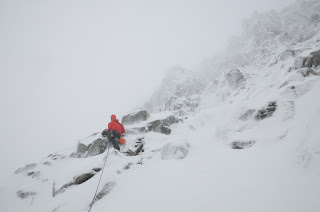 The turf was still well frozen but many of the cracks were icy. Thus easier climbing but not much protection. Here is Robbie starting the crux pitch... 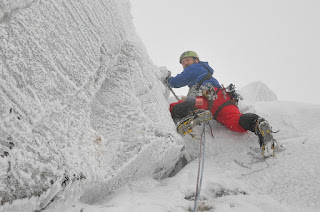 ... which culminated in a vertical corner with hooks slightly to the left so that the rockover was out of balance. After that one more step and it is an easy slope to the large cornice. However, the angle is easier but the snow is less compact and so a delicate approach helps. I found a not too bad bit of cornice and tunneled for maybe 15 min before moving onto the plateau.

After retrieving the rucksacks we realised that we had only 15 min to get the last gondola. We thus ran and bum glissaded down the hill to get the comfy ride down with 5 min to spare.
HW
Posted by Ryan & Henning at 13:03 3 comments: