Tom Patey needs no introduction to British climbers and certainly not to a climber working for the University of Aberdeen. Patey and his co-climbers achieved an increase in technical ability and combined with their apparent willingness to suffer in style (winter climbs without gloves) it allowed them to climb the long, striking lines that were beyond the previous generation. Winter was where Patey excelled and three climbs stand out for me: Scorpion, Eagle Ridge and Mitre ridge. They are long, sustained routes and in the 2008/2009 season I tried to do all three. I failed when Ryan and I decided after a 7 h walk in with blizzards, white outs, deep powder and a bad northerly gale not to climb Mitre ridge and returned at the bottom of the climb.

The 2009/2010 season started in late November and the weather forecast looked good enough for the 27th of November. Robbie, with whom I had drytooled two weekends as Newtyle and climbed minus one direct in summer, was also happy to do Mitre ridge as his first winter climb. I got up at 3 am, picked up Robbie at 3.30 am and we started to cycle in at 7 am. It was well below zero and there was ice on the path. At 7 we saw that Beinn a Bhuird was covered with lots of snow from 700 m upwards allowing us to cycle nearly to the point where a rougher path ascends to the Sneck. The winds were less than forecast and we walked into Garbh Choire and through deep powder to arrive at a very white Mitre ridge at 9.30 am. Here is Robbie entering the corrie... 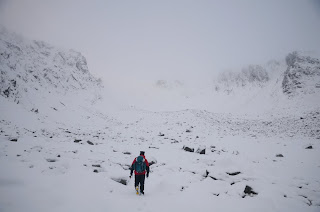 ... and here he approaches the start of the climb. 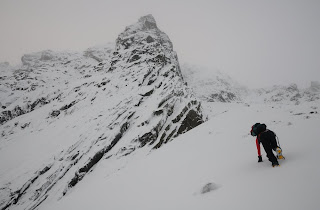 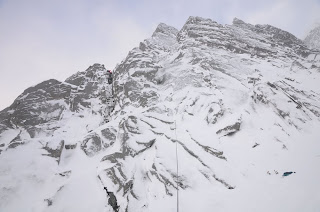 We climbed the short crux wall direct. There were only small potrusions for the front point and marginal hooks. I ensured to keep the front points in position, gently stepped up and after a breathhold found a reasonable hook and stepped up. The easy looking slabs, a hackfest if neve is present, were tenuous, often poorly protected and slow because a lot of powder had to be removed. Here is Robbie lost in a white void. 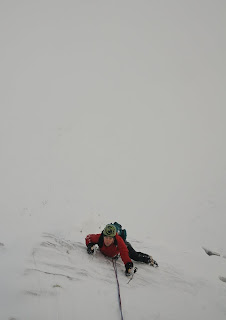 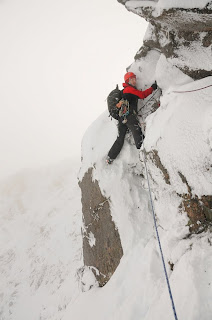 Above the turf was frozen but finding the turf under the powder was another matter because only the longest blades of grass were visible. A steep corner followed and then a traverse on a half-foot wide ledge to a run out, delicate, diagonal line to another corner and then a good belay behind two rocks. It was 14.30 h and because it would start to get dark at 15.30 h we decided not to do Bell's variation but ascended the Tower on the Eastern side to reach the belay above the very steep West wall. For the final ridge I ran the rope to the left and right of the mini towers instead of gear and then made another delicate traverse to the col. Here is Robbie belaying above Bell's variation. 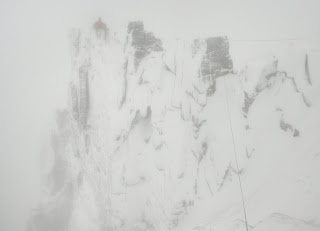 I agreed Robbie to just walk off onto the plateau making sure not to pull too hard so that Robbie would not be pulled off one of the Towers.
After a cookie or two we descended quickly. Because of our previous 7 h whiteout adventure I bought a GPS with a 1:50,000 Scotland OS map on we walked down knowing our exact position on the map every minute. Mountain bikes and GPS, I wonder what Patey would made of it all and how much it reduces the overall effort for the climb but the GPS made it safer with the map and compass as a back up. We reached the car at 18.30 h, Dundee at 20.00 h with Robbie having done a very special first winter climb!
HW
Posted by Ryan & Henning at 12:42 1 comment: