No climb this season so far had put up much resistance and so I was keen to lock horns with a hard but safe climb. Andy Inglis, with several VIIs under his belt, was the ideal partner and we decided to climb Cornucopia, a short mixed climb on the Ben graded VII,8/9. Cornucopia was first climbed by Simon Richardson and Chris Cartwright in 1996 and was the start to a series of hard mixed climbs on the Ben that followed. 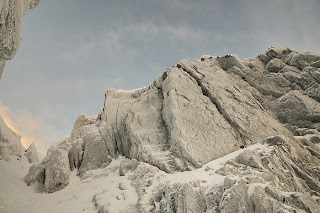 The image above shows Andy abseiling off Cornucopia (please feel free to subtract style points) with The Secret in the background and the deep crack of Darth Vader in the foreground, albeit tilted due to the wide angle lens used. Saturday started misty and an inversion was forecast. We were thus worried whether the mixed climbs on the Ben would be in condition. But the inversion never came and high in Coire na Ciste several climbs including Cornucopia were well rimed and in acceptable winter condition. We soloed the easy bit and the plan was for Andy to lead crux pitch 1 and for me to lead pitch 2. Here is Andy starting the climb. 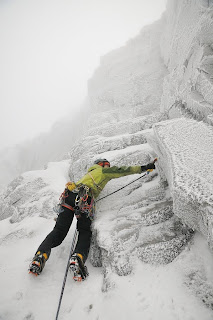 The Cornucopia corner is steep. It is initially climbed on the right where the hooks are mostly decent and the gear placements are good. A little strenuous but not desperate. Here is Andy starting the harder climbing. 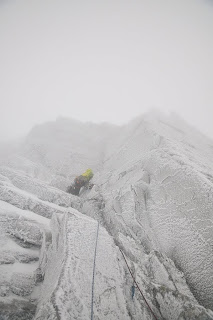 But at 15 m it changes: all very steep, almost nothing for feet on the left wall, not much on the right wall and the crack is too deep to get a hook. Andy got stuck in, went through 63% of the positions outlined in the advanced Kamasutra guide and despite his determination he eventually fell off. I lowered Andy and he offered the lead. I made good progress to the crux but then struggled like Andy before me. After throwing one Hex down the Ben and a lot of faffing I managed to climb up and to swing one of the remaining Hexes higher into the crack and to seat it well. Still some way to go to the ledge but at least no whippers. I had a few tries and came off but finally I decided to pull out all the stops: Up to the poor hook/sidepull on the right, another not really convincing hook in the crack and I got my foot onto one of the chickenheads (as Simon describes them in his account of the FA). I kicked the right foot into the crack which was more compressed at this point and held, got the left foot onto another chicken head and the axes into decent snow ice on the mini ledge. A few nervous seconds and I was on the ledge, pumped. The climb was stronger than we were but at least we managed to work the cux. Andy offered the lead but I was spent and so Andy led pitch two, demonstrating the skills gained whilst doing grade VII mileage. Here is Andy moving from a flake back into the main crack... 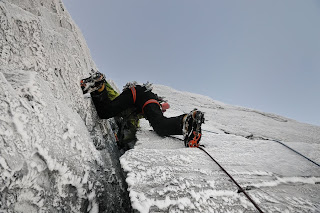 ... and here he is shaking out. The second pitch is around tech 7. 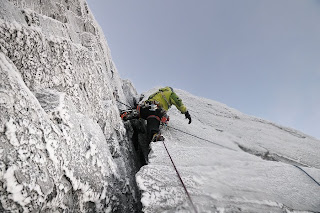 Arno and I had time for a short day so we left Dundee at 8 am and drove to Glen Clova to do Look C gully in Corrie Fee. Here is Arno entering the corrie... 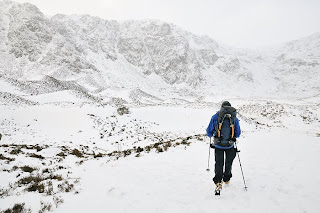 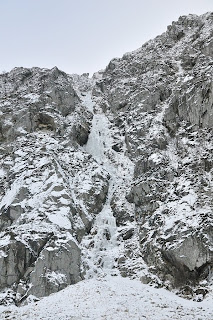 One team had given up and informed us that there was a slow moving team of three ahead. We went in second position and climbed up. The team of three were the Trudgill brothers Pete and John and Will. Pete led the crux and then John and Will one by one. Here is the team on belay... 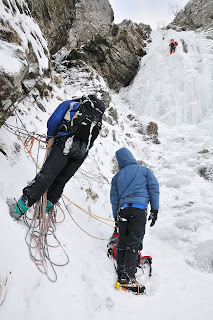 ... and here is Pete leading the crux. 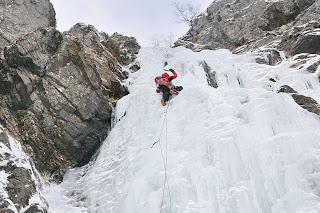 After that the wider, easier, upper part of the gully. 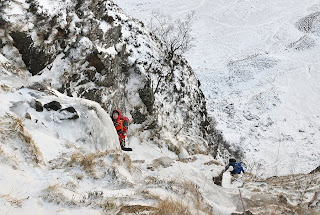 Here is Arno, sans helmet (left in the car), moving up to the belay. 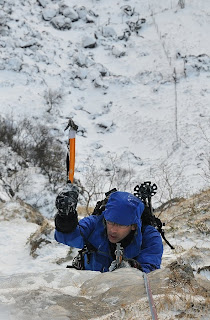 Whilst the Trudgill turbos finished the gully... 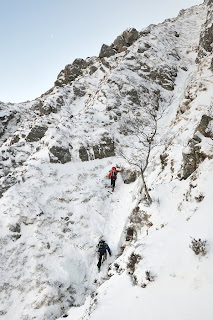 ... we decided to get out of the way and to do a mixed finish. A few tech 5/6 moves were on this section. 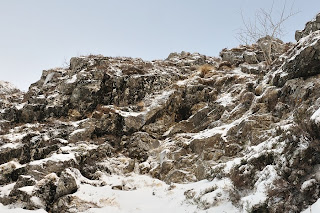 A soup and pint in the Glen Clova hotel and home just after 6 pm.
HW
Posted by Ryan & Henning at 14:53 No comments:

I always wanted to visit Creagan a' Choire Etchachan in winter. Today Tim and I did. We met at 7 am at the Linn of Dee car park and walked for over 3 h on icy paths (bikes are of no use at the moment) to reach the Hutchison hut. For the first time I had brought my pocket rocket and some Oxo cubes and we had a warm brew and geared up inside. Here is Tim leaving the hut to head for the cliff above (note the straight shafted ice axe in his right hand for the extra challenge). We hoped that the East-facing cliff was a good choice in the strong Westerly winds and it was as it was out of the wind. 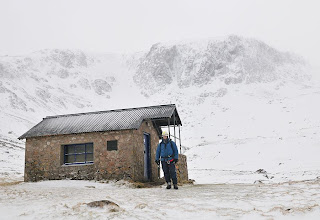 On the approach it became clear that there was less ice than we had thought despite the thaw freeze cycles. Djibangi and Djibooty had no ice and the lower slabs of Red Chimney, our climb, were thinly iced. 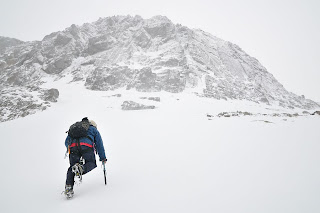 Red chimney is on the photo below. The route starts in a bay on the left and then over thinly iced slabs (at least today) towards the main gully. High there is another steepening with a tricky ice curtain. Red Chimney was first climbed in winter by Hay and Ibbotson in 1959 but with a cop out variation up the rib on the right. The direct ascent and natural winter route was climbed by Paterson and Hepburn (aka Willie the Pimp and Superman) in January 1967 which is the month I was born. 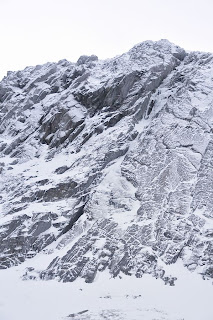 Here is Tim finishing the slab pitch on easier neve... 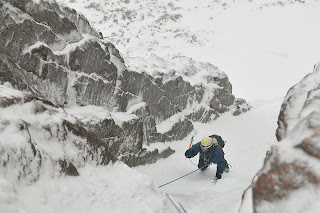 ... and here he is looking up to the pitch with the ice curtains. It is steeper than in looks. 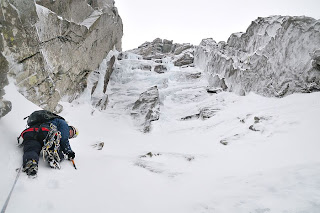 After that some neve and turf. We topped out into a strong, icy wind and bum glissaded back to the Hutcheson where we cooked some more soup. It was getting dark so we were lighting candles. 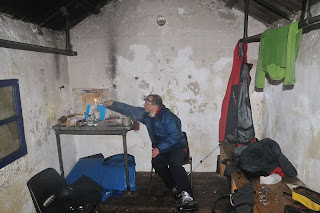 After that the Cairngorm tradition of the long walk out in the dark. There was a lot of ice and hard neve on the path so the going was tricky in places. We brewed up a mint tea at Derry lodge and reached the car just after 8 pm. Here is Tim walking back. 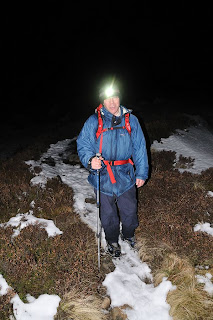