Somewhere in the Angus hilld there is a crag where few climbers have been. Today Piotr (better known as Polish Pete), Forrest and Brian went to try a new route. Here we are on the long walk in not made easier by all that snow... 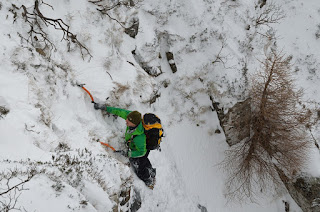 ... and here we are on the first pitch of our route. 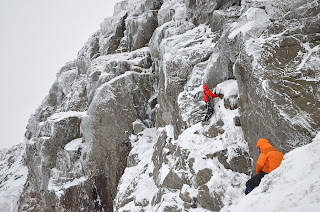 After turf and a chimney some thin climbing on tufts of turf followed to s wee meadow... 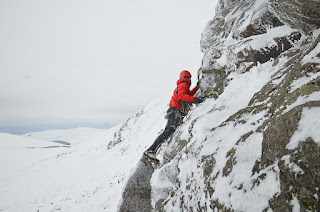 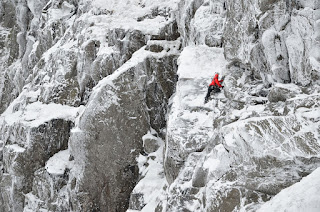 Forrest led the second pitch. A ramp of thin turf and ice to gain the easier turfy upper part of the face. Here is Forrest at work... 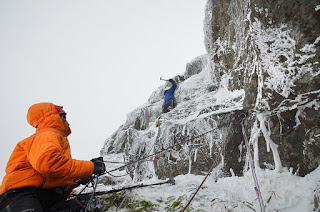 ... and here Pete follows with one axe on turf and one on ice. 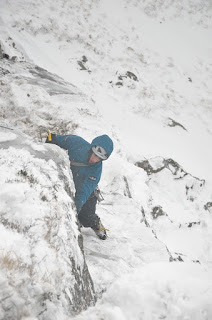 After that some easy ground and a long, long way home... 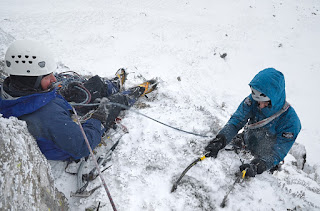 ...through deep snow and forests. 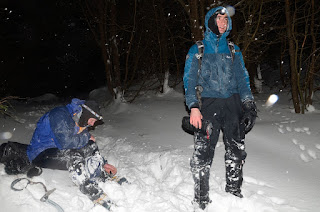 We named the line 'Brian's ramp' in line with Scottish route naming tradition.
HW
Posted by Ryan & Henning at 16:25 2 comments:

This Sunday Tim and I agreed to climb further afield but when we reached Blair Atholl at 6 am it was snowing heavily. As the forecast predicted more snow this might have meant not only a tough, slow walk in but also a potentially epic drive back to Dundee. So we U-turned to reach Glen Clova just before 8 am. Our choice was Wild Cat Wall V,6** which tackles the 'inverted triangle' headwall after an alternative start to Diagonal Gully III***. The first ascent was climbed by Chris Cartwright and Simon Richardson on the 27th November 2005. Here is Tim walking into a whitening winter corrie. 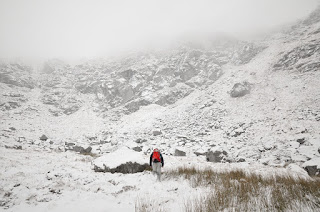 The start was semi-frozen and heathery and Tim made most of the nutritious plant which is high in fibre. 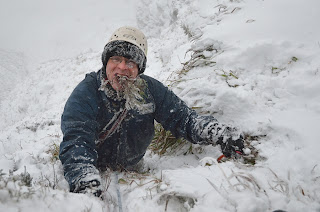 The headwall, where the climb proper lies, is reached from the left branch on Diagonal Gully by climbing briefly steep out of the gully to reach an offwidth crack to start the climb proper. This pitch ends on a ledge under the roof. Here is Tim after the hard climbing before traversing onto the ledge. The turf was frozen at this stage which was essential as many placements are on turf. 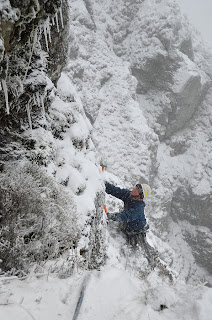 The next pitch traverses right to reach a steep, exposed but well protected corner which is the crux. After that some more steep climbing to reach a long ledge just below the top. Here is Tim about to climb the ramp to the long ledge... 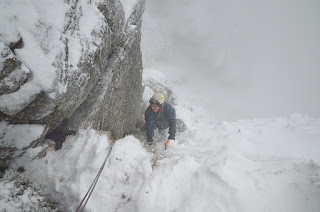 ... and here he has reached the ledge. 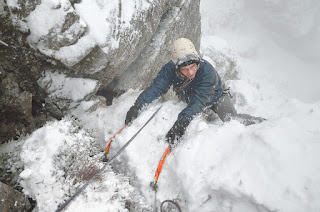 I descended to pick up the rucksacks and we decided to go to the summit of Driesh before descending in the twilight down into the forests of Glen Clova.
HW
Posted by Ryan & Henning at 10:22 1 comment:

The season so far was marked by colds, cold weekdays, warm weekends and as a result only one winter climb. It looked as if this trend would continue during the Christmas-Hogmanay holidays, with temperatures above 10 degrees forecast. Only New Year looked semi-decent and so Simon and I agreed to meet on the first day of 2013 at 10 am in Glen Clova for some new routeing. We decided to climb in corrie Farchal, which looked whiter than winter corrie just to the right. It can be reached via a bridge from the road, is 700 m high and best after snow and a thaw freeze:
http://www.streetmap.co.uk/map.srf?x=328060&y=773985&z=120&sv=328060,773985&st=4&ar=y&mapp=map.srf&searchp=ids.srf&dn=885&ax=328060&ay=773985&lm=0
When we approached the corrie I (not Simon) was surprised by the good conditions: neve, frozen turf, some ice and a dusting of snow. We soloed a gully line with some icy steps... 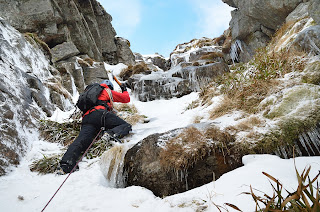 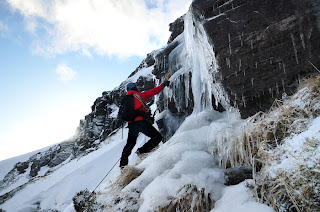 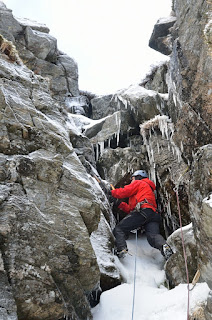 A lovely three pitch III,4 gully line overall. Surprising that this had been missed by the Dundonians for all these years. 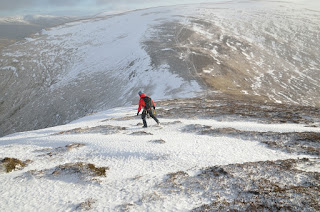 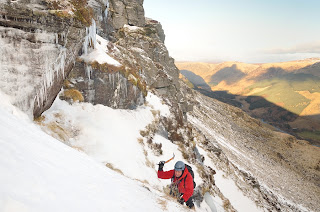 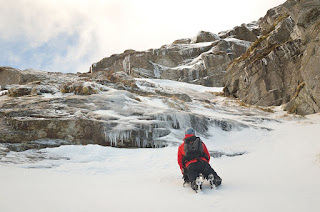 ... to finish again with a balancy but easier step. Another three pitch grade III. 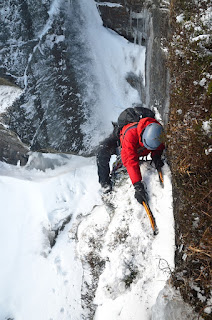 ﻿
Again a quick descent. The last climb was a more technical three pitch buttress with several quality tech 4-5 sections, IV,5 overall. It was escapable at times but was overall a good quality climb which included a 'threading the needle' tunneling bit. Here is Simon leading one of the trickier bits. 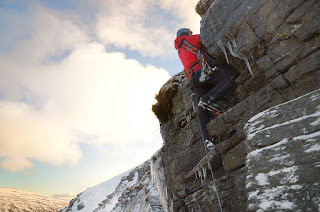 We reached the cars at 17.30 h so in less than 8 h 3 three pitch routes and 400 m of climbing were done close to home out of the wind, in lovely conditions with some good climbing. What a good start to 2013! Only a pint in the Clova hotel, normally a must, was missing.
HW
Posted by Ryan & Henning at 03:01 1 comment: