Recently I have been reading up on specific training recommendations for climbing in order to prepare for the rock climbing season. There was some good advice but also some opinions that are not supported or that are contrary to the existing scientific evidence. The lack of scientific evidence does not necessarily mean that the recommended training does not work. It may well work and often very well especially for those that give the advice. However, certain types of training only work for some and in other cases the training might work but the explanation is wrong. Being an exercise physiologist I thought it would be good to comment on it. The following three questions interest myself and are relevant for climbing:

Question 1. I am following a training programme designed to increase climbing-specific strength but I don’t improve. What is the problem?
There is now evidence from solid studies showing that individuals respond very differently to endurance and strength training. For example, Monica Hubal and colleagues studied 342 women and 243 men that took part in the same 12 week, progressive strength training programme. They found that the size of the trained muscle changed from -2 to +59% and that strength changed from -32 to +149 (Hubal et al., 2005). The fact that one individual lost 1/3 of her/his strength despite training to increase strength suggests that there were some poorly controlled external factors but generally the message is that individuals will respond very differently to a strength training programme. So what's the lesson learned? Training recommendations designed to improve climbing-specific strength will only work very well for the MacLeods, quite well for Joe Average and not at all for the poor responders. Those that write training plans should point that out to the recipients.


Question 3. Can maximal neural activation only be achieved with near maximal contraction training (1 repetition strength training, hard bouldering, campus board)?

Jungblut S (2009). The correct interpretation of the size principle and its practical application to resistance training. Medicina Sportiva 13, 203-209.
Posted by Ryan & Henning at 10:02 1 comment:

Garbh Bheinn for the budding Alpinist

Declan Lunny, a good friend of Ana and mine (and the rest of Dundee), was back to Scotland from Singapore where he currently works. He revealed that he and some other Irish gentlemen had booked a summer trip up the Finsteraarhorn, Moench and Jungfrau in the Alps with Alan Kimber, probably the best known Alpine guide residing in Scotland. But when Alan sent a list with the equipment required (things such as prussick loops, crampons, harnesses and parachutes) and after I told Declan that AD was the French abbreviation for 'quite difficult' (for seasoned Alpinists that is) it must had dawned on Dec that the planned Alpine trip was different from the usual bothy piss up!

Some preparation was required! So I convinced Dec and his mate John that we should start with some basic rock climbing at Dunkeld. And despite various cop out attempts we stood at the bottom of Polney and Dec climbed Kestrel Crack (severe) and a VDiff with not much of a problem... 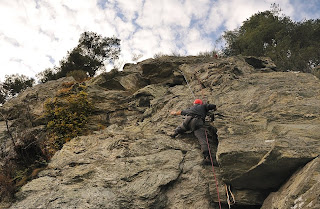 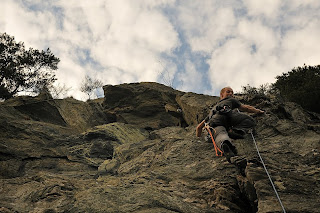 John and I then climbed The Groove (VS), a Dunkeld classic... 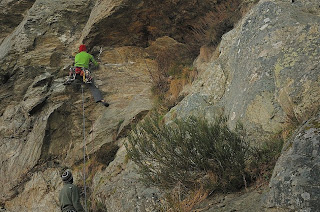 ... before driving all the way North to the Ardgour peninsula. I can't remember ever having seen that many stars and we woke up to a beautiful day. 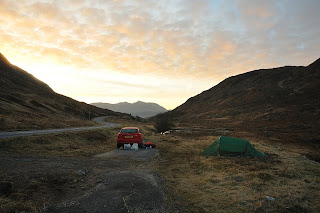 We walked into Garbh Bheinn... 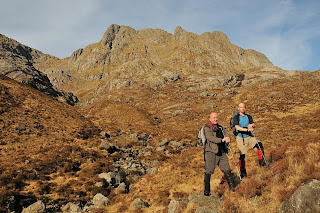 ... to do Pinnacle Ridge as Alpine practice. The two pinnacles are obvious and to the left is great ridge. 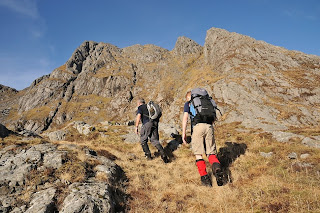 The first Pinnacle is the upper limit for scrambling and good for Alpine rope practice. 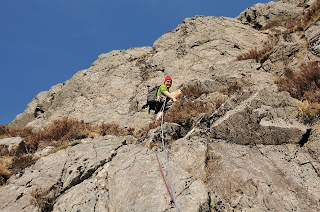 Declan had no trouble neither with the climbing nor with the exposure... 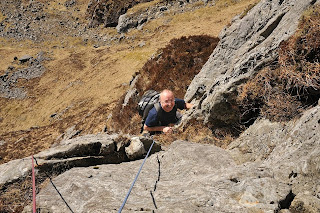 ... and neither had John who would probably be able to second HVS. 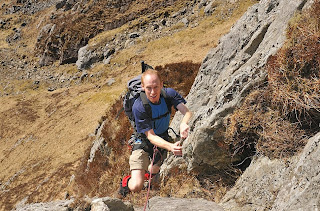 Adam joined us after driving over from Aberdeen in the middle of the night. He picked up John's rucksack which John had thrown down the hill from the first belay. Here are the three of them with snow capped Ben Nevis in the background. 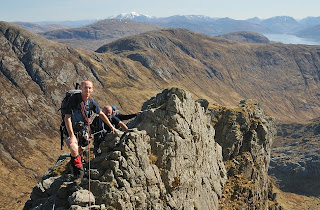 The climb finished up the second pinnacle, which was a bit grassy but again the whole team performed very well. Here is John... 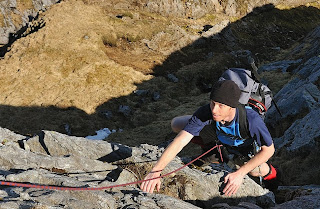 ... and here are Declan (smiling after discovering that he is actually quite good at this and that he was still in the genepool) and Adam. 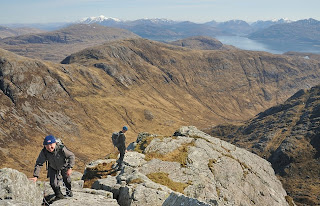 Now things turned lazy. Well over 20 degrees in the Glen, still very warm high up, no wind and views to die for over to Ben Nevis and Glen Coe. 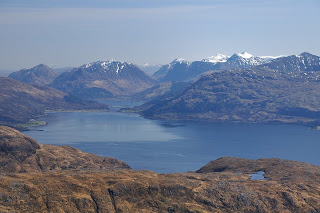 A good rest at the top. The image shows John using the oxygen bottle (of the Glenmorangie variety) and Adam overlooking Loch Linnhe... 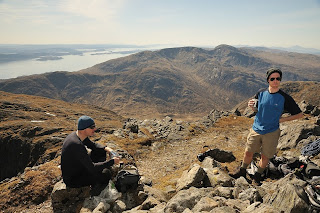 ... and here is Dec already cocky after playing the big chicken for the previous three days! 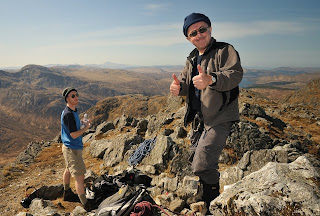 Time to enjoy the views... 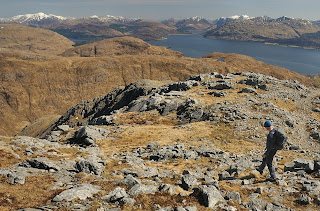 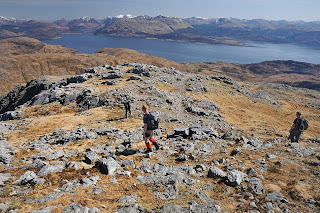 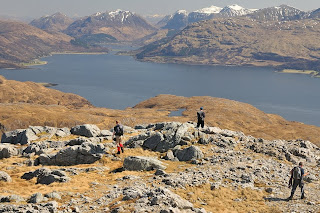 ... of the many views that Scotland has to offer. 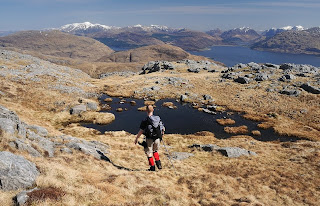