This summer has been very frustrating for me: poor weather, an almost dislocated shoulder in April and a penicillin-resistant chest infection all July triggered a no-proper-climbing summer. But then early autumn brought some Indian summer and we used it last weekend with a kayak trip to the Isle of May and Robbie and I decided to climb on the Dubh Loch this Saturday. As we have signed up for the Dundee 10 miler on the 1st of November we decided to do a jog in. Here is Robbie approaching the forest of the Glittering Skellies walk... 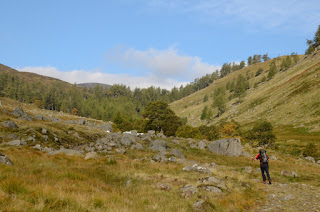 ... and here we descend, just before the final climb to Broad Cairn, to the Dubh Loch. 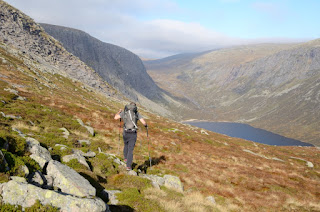 When we arrived we saw another party on the Blue Max. 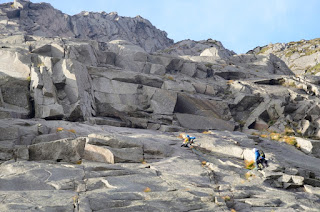 We decided to do the Pink Elephant or more correctly the Dinosaur-Pink Elephant combination. It is with 320 m one of the longest rock climbs in Britain. J.W. Stenhouse and B.T.Lawrie climbed the Dinosaur on the 25th of July 1964 and J. Grieve and A. Fyffe then climbed the Pink Elephant above the terrace on the 14th of June 1969. Here is Robbie starting the climb near the lowest point of the slabs. The final groove is high above just below the sky. 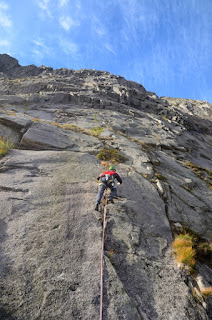 The whole climb is a sea of grey granite. This is me on pitch 2 in a photo taken from Alistair Todd who was next door. 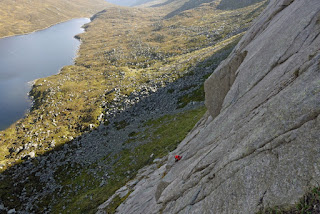 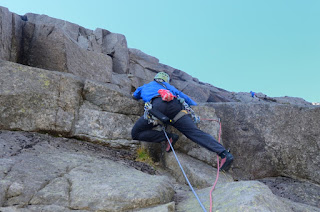 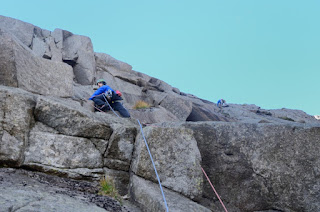 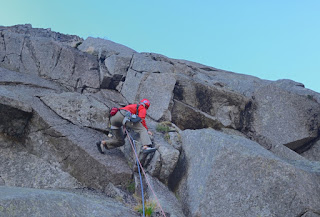 Here is Robbie in a corner above the terrace, the grassy bit that splits the lower from the upper slabs.

I then got a wet 4b pitch which felt much harder as it involved climbing soaking wet overhangs. Here I am preparing to do the crux move of that  pitch. 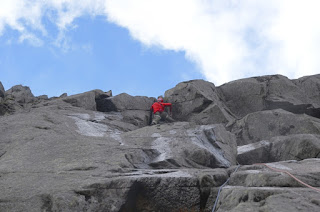 We reached a good belay before the final two 5a pitches. As I had climbed very little this year I offered Robbie the lead of both pitches for me picking up his rucksack. Here he is high above the Dubh Loch on a good belay. 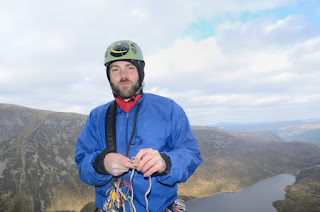 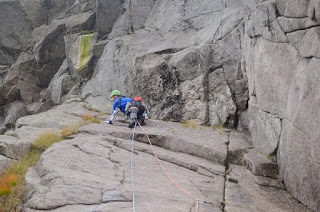 ... followed by good moves onto a huge piece of rock and a tenuous move for a knife edge on the left side of the final groove. Here is Robbie preparing the move onto big chunk of rock... 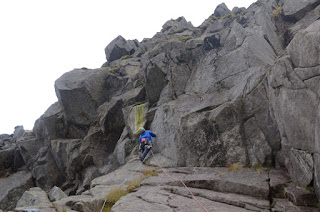 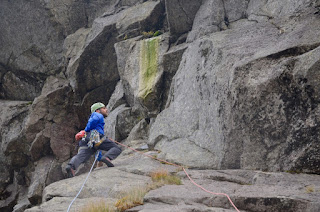 The final groove involved 45 m of slimy rock but luckily with plenty back and footing, a technique well known to winter activists. Here is Robbie at the top. 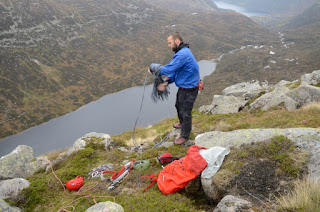 I went down the spooky central gully with plenty of clean granite from recent rock falls to collect Robbie's rucksack. Back up to just below Broad Cairn and a long rucksack job back to the car which we reached just before 8 pm. Dubh Loch days are never short, especially when jogging in from Glen Clova.
HW
Posted by Ryan & Henning at 15:51

It's a irritative adventure

Well that's adventurous, you can come and do some research on our own Granite Quarry in India I hope you will enjoy a lot!